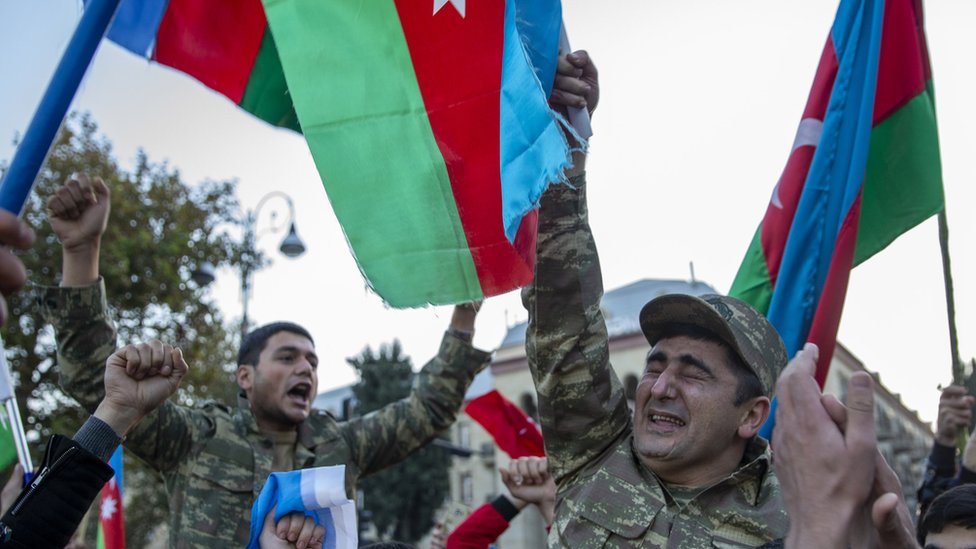 By Alexander GabuevCarnegie Moscow CenterPublishedduration8 hours agoimage copyrightGetty Imagesimage captionAzerbaijanis have been celebrating victory after the end of the conflict, but two big powers have made gains tooA bloody six-week war in Nagorno-Karabakh is over, after a peace agreement brokered by Moscow was signed by the leaders of Azerbaijan and Armenia. As the dust settles,…

A bloody six-week war in Nagorno-Karabakh is over, after a peace agreement brokered by Moscow was signed by the leaders of Azerbaijan and Armenia. As the dust settles, Azerbaijan appears to be the clear winner, while Armenia has suffered a bitter defeat. There are, however, two other powers that have benefited from the conflict and the resolution effort: Turkey and Russia.

How Turkey and Russia have gained from conflict

For Turkey, the war in Karabakh was a showcase for Ankara’s growing role in the strategically important South Caucasus.

The victorious Azerbaijani military was supplied, trained, and supported by the Turkish army. Some reports suggest that Turkish officers played a key part in guiding drone attacks which played a decisive role in this conflict, although that has been denied by Ankara.

President Recep Tayyip Erdogan was also vocal in his diplomatic support for Azerbaijan. The victory shows that Turkey has gained significant influence in the region, particularly in Turkic Azerbaijan.

At the same time, the outcome of this war, and particularly the way the peace agreement came about, is a win for Russia.

Just a couple of weeks ago, with significant Azeri advances and videos of modern drones destroying Armenian Soviet-era tanks, Moscow’s position looked pitiable. A great power that was once the unchallenged regional hegemon appeared unable to save Armenia, its only treaty ally in the South Caucasus.

But Russian calculations turned out to be more sophisticated and nuanced.

Why Russia left Armenia on its own

Over the last two decades, the Kremlin has been under no illusions that, with a petrodollar-fuelled Azeri defence budget three times the size of Armenia’s, the balance of power has been inexorably tilting towards Azerbaijan. Moscow tried to pressure Armenia to accept a diplomatic settlement brokered by Russia, the US and France, but the Armenian side refused to make concessions.

When a democratic revolution in Armenia brought Prime Minister Nikol Pashinyan to power in 2018, Yerevan’s public stance on Nagorno-Karabakh became even tougher.

This is why for years Russia has made it clear to the Armenian government that the military treaty between Yerevan and Moscow covers only the internationally recognised territory of Armenia, and not Karabakh. When the Azeri onslaught began, Armenia was on its own.

How Russia benefits from peace deal

When the Azeri military had taken Shusha (Shushi in Armenian), the second-largest city in Karabakh, Russian diplomatic efforts intensified. Using a mixture of diplomacy and pressure, Moscow secured a peace deal that turns a conflict in which there were no good options for the Kremlin into a situation that helped to boost Russia’s leverage.

The deal has prevented the conclusive defeat of Nagorno-Karabakh and the likely expulsion of its Armenian inhabitants.

Russia is sending about 2,000 peacekeepers to protect the remaining Armenian population, separate the two adversaries, and patrol a corridor that will connect Armenia to Nagorno-Karabakh: something the Kremlin has wanted since 1994, but couldn’t obtain at the negotiation table before this war.

Russian President Vladimir Putin is the only signatory of the peace deal beyond the leaders of the two warring states, and the Russian troops will be the only peacekeepers monitoring the implementation of the agreement, with no Turkish or any other boots on the ground – although Turkey says it will send observers.

Russian border and customs services will control and operate a newly created route that will connect Azerbaijan with its exclave of Nakhichevan.

Finally, Moscow has shown that it remains an indispensable power in the region, and was able to preserve its ties with both Azerbaijan and Armenia, while successfully competing with Turkey.

Why Russia has not had complete success

Moscow’s diplomatic victory comes at a price. The war has shown the growth of Turkish influence in the Caucasus, and Moscow no longer looks like the only major power in the region.

But the region had been opening up over the three decades since the collapse of the Soviet Union, and no-one in Moscow believed Russia could dominate the region indefinitely.

Then there is the anger and sense of betrayal felt by Armenian society.

But Moscow believes Yerevan has no realistic options other than continuing to rely on Russia to guarantee its security. A likely by-product of the Armenian defeat might be the fall of Nikol Pashinyan’s government, but he won’t be missed by the Kremlin.

Why risks lie ahead

The major risk for Russia going forward is the precariousness of the peace deal that Moscow has brokered.

The treaty securing the presence of Russian peacekeepers will expire in five years, after which both Azerbaijan and Armenia will be in a position to call for their withdrawal.

The window of opportunity to broker a resolution to the conflict is very narrow, and, given the emotions on both sides and shattered status quo, getting Baku and Yerevan to agree on anything looks like an impossible mission.

This might be the point when Moscow will need co-operation from the US and Europe, which – having been completely absent from the picture this time around – can for the moment also be seen as in the losers’ camp.

Alexander Gabuev is senior fellow and chair of the Russia in the Asia-Pacific Program at the Carnegie Moscow Center.