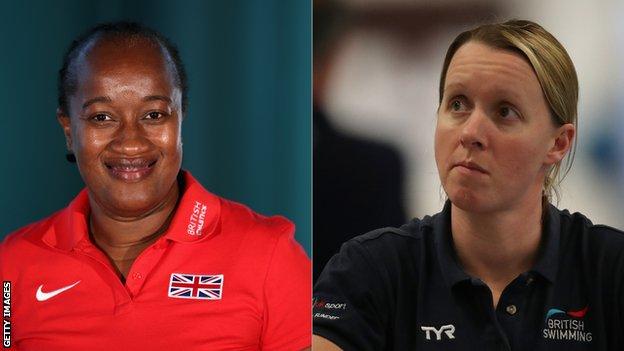 Paula Dunn and Mel Marshall have signed up to mentor new female coachesA “long overdue” project has been launched by UK Sport to improve gender diversity across elite sport.It aims to more than double the number of high-performance female coaches by the Paris Olympics in 2024.As it stands, 10% of coaching positions across UK Sport-funded…

A “long overdue” project has been launched by UK Sport to improve gender diversity across elite sport.

It aims to more than double the number of high-performance female coaches by the Paris Olympics in 2024.

As it stands, 10% of coaching positions across UK Sport-funded British Olympic and Paralympic programmes are held by women.

The government agency aims to increase that to 25% within four years as part of a new leadership programme.

Paula Dunn (Para-athletics) and Mel Marshall (swimming) will be among a group of leading coaches who will guide other women as part of the scheme.

Marshall said the existing representation figures are “concerning” and Sally Munday – who took up the UK Sport chief executive role last May – agrees with her.

“There are currently far too few female coaches operating at the highest level of performance and we are committed to addressing this reality,” said Munday.

“UK Sport is determined to see greater diversity across the high-performance community.”

In addition to Dunn and Marshall, Kate Howey (judo), Bex Milnes (Para-triathlon) and Tracy Whittaker-Smith (trampolining) will all offer opportunities for female coaches to observe them in action, while former GB Hockey coach Karen Brown will act as a mentor.

Why are female role models so important?

Dunn won five Commonwealth medals for England as a sprinter and, having taken her first job with UK Athletics in 2001, she progressed to her role as British Para-athletics head coach in late 2012.

However, towards the end of her career on the track she had been reluctant to consider coaching as an option because she did not see anyone like her in those positions.

“We need to break boundaries and it’s critical we have people in positions that female athletes can look up to,” said Dunn.

“Women need to be given the confidence to voice their opinions, which is why initiatives like this are hugely important,” she said.

What has traditionally held female coaches back?

“Women don’t want to be treated specially, but sometimes there needs to be a little flexibility,” said Dunn, who for several years juggled life as a single parent with full-time employment.

“Whether we like it or not, females are still the main provider for the family in terms of support for the children and the household.

“If a meeting is called for 8am then that’s horrendous for me as I have my son to take to school, so I’ll have to either ask for it to be moved or arrange childcare.

“British Athletics has been good with me, but it’s just about having that bit of awareness and understanding rather than thinking: ‘Because she’s a female she’s never going to commit.'”

Women bring a “completely different dynamic”, according to Marshall, a former Olympian and European champion swimmer.

“It’s important those more feminine traits – like listening, empathy, kindness and affection – can be brought to the table, but also to bring in what are traditionally masculine traits, like making decisions, providing direction and being strict,” she said.

“Once you throw a mix of male and female personalities then it changes the conversation and that balance of gender can have a massive effect on performance.”