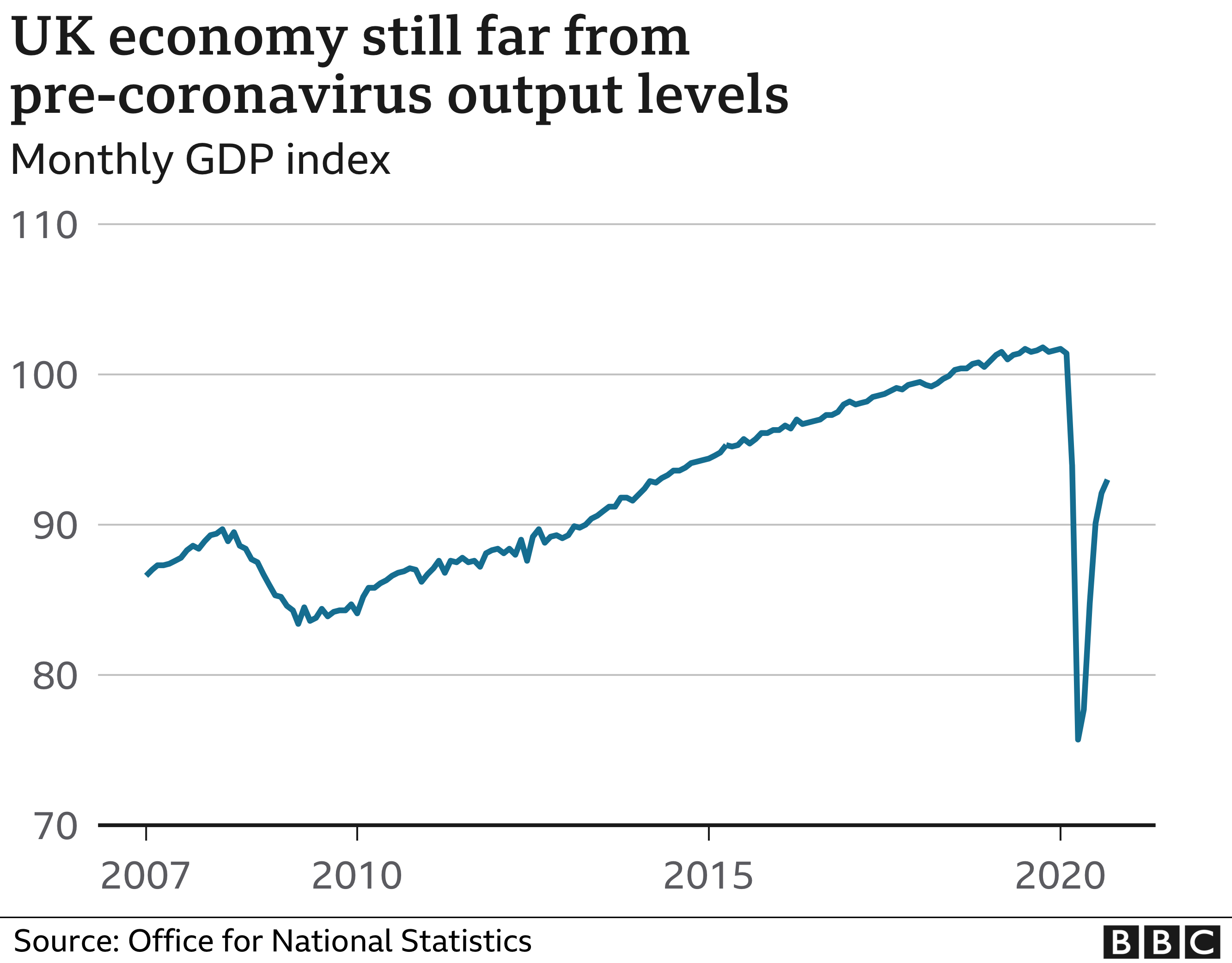 Publishedduration1 hour agomedia captionRishi Sunak: ‘There are reasons to be cautiously optimistic’The UK’s economy rebounded from recession in July to September, but growth showed signs of slowing down at the end of the three months.Growth of 15.5% in July to September was the biggest on record, said the Office for National Statistics (ONS).It came after…

The UK’s economy rebounded from recession in July to September, but growth showed signs of slowing down at the end of the three months.

Growth of 15.5% in July to September was the biggest on record, said the Office for National Statistics (ONS).

It came after a six-month slump induced by the first coronavirus lockdown.

However, growth was weaker in September than in the preceding months, while the country’s economy is still 8.2% smaller than before the virus struck.

The economy had shrunk in the first three months of the year and then contracted by a record 19.8% in the April-to-June period. Two consecutive three-month periods of contraction are generally defined as a recession.

Despite the rebound in July to September, analysts warned that the economy was likely to shrink again in the final three months of the year because of the impact of renewed lockdowns in different parts of the country.

A second lockdown began in England on 5 November and is due to finish on 2 December.

Thomas Pugh, UK economist at Capital Economics, said that in view of what had happened since, the figures felt “not just like old news, but like ancient news”.

“We already know that GDP will struggle to rise in October as tighter restrictions were imposed and that it will take a hammering in November as the effects of the second Covid-19 lockdown are felt.”

What is happening in the economy?

In September, growth was 1.1%, marking the fifth consecutive month of expansion. However, that was weaker than the levels seen in previous months.

Jonathan Athow, deputy national statistician for economic statistics at the ONS, said all sectors of the economy continued to recover, albeit more slowly.

“The return of children to school boosted activity in the education sector. Housebuilding also continued to recover, while business strengthened for lawyers and accountants after a poor August.

In another sign of the impact of the pandemic on the economy, figures released on Tuesday showed the unemployment rate rose to 4.8% in the three months to September, up from 4.5%.

The number of people out of work rose by 243,000 in the three-month period, the largest increase since May 2009.

How are businesses coping?

Welsh food packaging firm Transcend Packaging saw its sales collapse by half during the depths of the first lockdown.

But boss Lorenzo Angelucci says they have are now higher than they were at the start of the year – partly because the firm has started making personal protective equipment which kept sales buoyant.

“Obviously the beginning of the pandemic was pretty tough,” he told the BBC. “It forced us to be creative and come up with other types of products.”

The firm, which supplies clients such as McDonald’s, expects to benefit in coming months as takeaway services remain open.

“Food packaging is by default safer in this situation, because people still need to eat,” he said. “But the economy itself, I don’t think will be in a very nice position for a long time.”

Should we be cheered or worried?

Record growth for the UK economy in July to September is a welcome partial reverse from the record fall seen in the spring. It means that lights are going back on in the economy that were switched off in the first lockdown.

It is, though, catch-up not recovery. It is rebound more than it is established bounce-back. The economy is still nearly a tenth smaller than it was before the pandemic struck.

More than that, the data is a rear-view mirror on the economy. It reflects a period of falling infections, the boost to growth and to footfall from the chancellor’s Eat Out to Help Out scheme. It shows the rate of this rebound slowing in September, even as there was a boost from the return of school pupils.

Since then, there has obviously been a further, though less extensive shutdown, but both the Bank of England and the Treasury have boosted the economy. The great bit of sunlight on the horizon, however, is the vaccine. That will be the biggest economic stimulus imaginable.

What has the government got to say?

In a BBC interview, Chancellor Rishi Sunak said it was going to be “a difficult winter”, but there were “reasons for cautious optimism”.

“Our priority remains to protect as many jobs as possible,” he said, adding that the extension of the furlough scheme and the creation of the Kickstart job scheme for young people would help to do this.

He maintained that England would be able to exit its second lockdown as planned on 2 December.

“I am very confident that the measures we have put in place will do the job that we need them to do,” he said.

Gross domestic product (GDP) is the sum (measured in pounds) of the value of goods and services produced in the economy.

But the measurement most people focus on is the percentage change – the growth of the country’s economy over a period of time, typically a quarter (three months) or a year.

If the GDP measure is up on the previous three months, the economy is growing. That generally means more wealth and more new jobs.

If it is negative, the economy is shrinking.

What more can economists tell us?

Samuel Tombs, chief UK economist at Pantheon Macroeconomics, said the economy was likely to shrink by about 0.5% in the final three months of the year.

“On a monthly basis, it probably won’t recover to September’s level until the spring, when it should be possible for Covid-19 restrictions to be sustainably relaxed,” he added.

Looking further ahead, Sarah Hewin, chief economist at Standard Chartered bank, told the BBC there was “uncertainty” about the first three months of 2021, “particularly if we have trade disruptions related to Brexit as the transition period comes to an end at the end of the year”.

What difference could a vaccine make to the economy?

“The sooner that way out of Covid comes into effect, the more businesses are likely to survive in financial terms,” he told the Financial Times in a video interview.

Mr Bailey said the news was “broadly consistent” with the Bank’s latest set of economic forecasts, which assumed that the pandemic would start to recede after the winter as better treatments arrived.

But the news “reduces the huge level of uncertainty that we have in the forecasts”, he added.