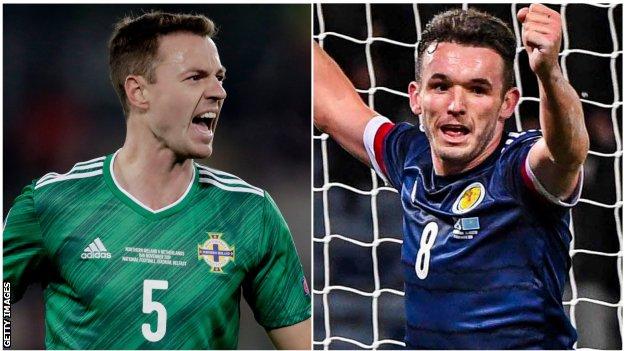 Jonny Evans of Northern Ireland and John McGinn of Scotland will hope to help their nations reach Euro 2020Northern Ireland and Scotland are set for massive games on Thursday, with both nations one win away from a place at next summer’s delayed Euro 2020.Scotland face Serbia in Belgrade in their play-off final (19:45 GMT), hoping…

Northern Ireland and Scotland are set for massive games on Thursday, with both nations one win away from a place at next summer’s delayed Euro 2020.

Scotland face Serbia in Belgrade in their play-off final (19:45 GMT), hoping to qualify for a major men’s tournament for the first time since 1998.

And Northern Ireland host Slovakia at Windsor Park in their final (19:45), aiming to reach a second European Championship, four years after their debut appearance in the competition.

Euro 2020, which has retained its name despite being moved to next year because of the coronavirus pandemic, will start on 11 June.

Scotland are on their longest unbeaten run since 1988, having not lost in their previous eight matches, and will be hopeful their good form can take them that final step.

Their most recent major tournament appearance came at the 1998 World Cup in France, while they last featured at a Euros in 1996.

If Scotland can overcome Serbia, they will join England, Croatia and the Czech Republic in Group D at next year’s tournament.

“It is really difficult to say but this is just another game,” said Scotland boss Steve Clarke.

“When you go into every game, [no regrets] is a message you give. A game of this magnitude, I probably don’t need to say that because the players understand if they come off the pitch with regrets they’ll never forget that night.

“You go out there, do your best, give everything you can and hopefully the footballing gods smile on you and you get the right result.”

Northern Ireland came through a dramatic penalty shootout against Bosnia-Herzegovina to secure their place in the play-off final.

Slovakia also won their semi-final on penalties, overcoming the Republic of Ireland after a goalless draw.

There will 1,060 spectators at Windsor Park to cheer on Ian Baraclough’s side on Thursday, with fans given socially distanced seats in the 18,500-capacity stadium.

A spot in Group E alongside Spain, Sweden and Poland is up for grabs.

“They want to get down to business. That’s how it was last month and how I feel it was this week. We’ll build that up as we go on,” said Baraclough.

“It’s a game we’re capable of winning if we set our minds right; if we do the right things.”

“It will definitely be on an equal level, if not better, to do it again.

“It’s a game we believe we can win. It’s a game we’ve been looking forward to for a long time and we’re delighted we’ll have a number of fans back in the stadium to back us.”

For Northern Ireland and Scotland, hot on the heels of their Euro 2020 play-offs are Nations Leagues fixtures, with England and Wales also in action in that competition.

Gareth Southgate’s England are at Belgium on Sunday (19:45) and then at home to Iceland on 18 November (19:45), although there is doubt over the second fixture because of travel restrictions.

Belgium are top of Group A2 and if they beat England, and Denmark fail to win against Iceland, Roberto Martinez’s side cannot be caught.

England are third – level on points with Denmark – but have won their past four away games without conceding a goal.

However, continuing that run will be severely tested by a Belgium side who have won their past 10 competitive home games, scoring 46 goals.

Northern Ireland, meanwhile, will take on Austria and Romania looking for their first Nations League win after picking up a single point from their four Group B1 games so far.

Scotland are top of Group B2, four points clear of the Czech Republic in second, and face games against Slovakia (Sunday, 15 November 14:00 GMT) and Israel (Wednesday, 18 November 19:45 GMT).

Wales, who will not have manager Ryan Giggs in the dugout for any of their games in November after an allegation of assault made against him – which he denies – are top of Group B4 with three wins and a draw from their four games so far.

What do you do when you have a packed couple of weeks with big Euro 2020 qualifying games and Nations League fixtures taking place? Schedule in a few friendlies too, of course…

England warm up for their Nations League games with a friendly at home to the Republic of Ireland on Thursday (20:00).