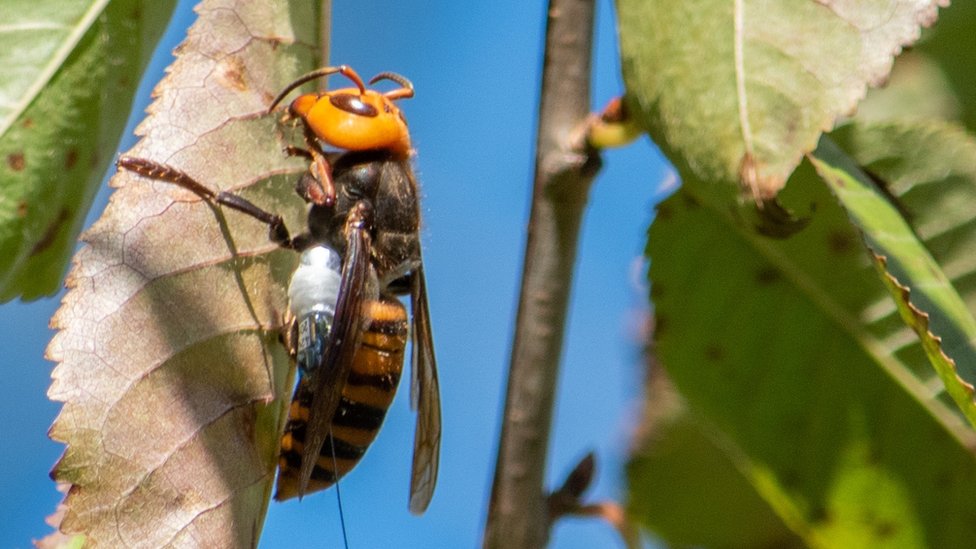 Publishedduration3 hours agoimage copyrightReutersimage captionAsian giant hornets are not native to the Pacific North-West and kill honeybeesWashington is unlikely to have seen its last Asian giant hornets, the state’s agricultural department has said, after scientists found 200 queens in one nest. The nest – the first in the US – of the so-called murder hornets…

Washington is unlikely to have seen its last Asian giant hornets, the state’s agricultural department has said, after scientists found 200 queens in one nest.

The nest – the first in the US – of the so-called murder hornets was captured with a vacuum from a tree in October.

Researchers believe more queens – which are responsible for establishing colonies – could remain at large.

But they are confident the population can be brought under control.

Asian giant hornets are an invasive species in the Pacific North-West. They target honeybees, which pollinate crops. The insect, which is native to Japan and South Korea, can slaughter a bee colony in a matter of hours.

They can also spit venom and inflict numerous powerful stings on humans.

“We believe there are additional nests. There is no way to be certain we got them all,” Sven-Erik Spichiger, who researches insects with the Washington State Department of Agriculture, said in a press conference on Tuesday.

The nest was extracted from a tree in the city of Blaine, close to the Canadian border, on 24 October. Scientists then quarantined the 22cm (9 in) diameter nest and after 24 hours were able to open it to examine the contents.

Inside they found evidence of almost 500 insects at various stages of life including 112 worker hornets and close to 200 queens.

“It’s possible some [queens] emerged before we did the extraction. There is no way of knowing how many more,” Mr Spichiger said, explaining that three queens were found in the local area after scientists had removed the nest.

But he said they had arrived “in the nick of time” to prevent the majority of queens from leaving the nest and mating.

“Frankly we are encouraged because of the number of queens we were able to count and kill,” he said.

Mr Spichiger said it was likely that the insects arrived in the Pacific North-West as part of international commerce. “We will never know how they got here…but it could have been a vehicle, wood chips, hay bales,” he explained.

The Washington State Department of Agriculture is committed to eradicating the invasive species from the region, he added.

Asian giant hornets “are not going to hunt you down and murder you”, Mr Spichiger explained, but that if a person were to walk into a nest, their life would be “probably in danger”.

Around 40 people are killed annually by the hornets in Asia, according to the Smithsonian museum in Washington DC.