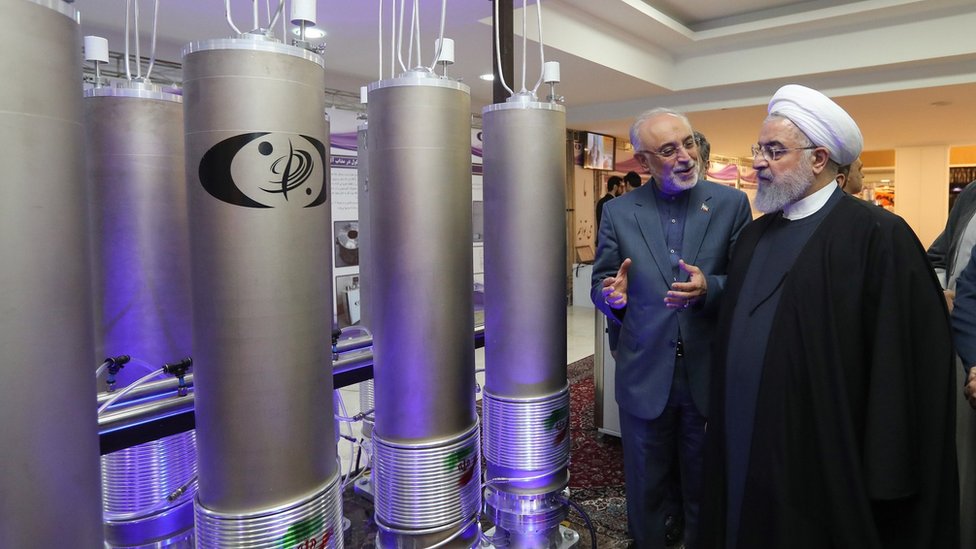 Publishedduration3 hours agoimage copyrightEPAimage captionSince last year, Iran has been reneging on its commitments under a 2015 nuclear dealIran now has more than 12 times the amount of enriched uranium permitted under a 2015 nuclear deal with world powers, a global watchdog says.The International Atomic Energy Agency (IAEA) said Iran’s stockpile of low-enriched uranium had…

Iran now has more than 12 times the amount of enriched uranium permitted under a 2015 nuclear deal with world powers, a global watchdog says.

Iran insists its nuclear programme is exclusively for peaceful purposes.

The IAEA also said Iran’s explanation for the presence of nuclear material at an undeclared site was “not credible”.

On Twitter, the country’s ambassador to the IAEA, Gharib Abadi, said “any hasty comments should be avoided”, adding: “Interactions are ongoing with a view to finalize the resolution of the matter.”

In its latest report, distributed to member states, the IAEA did not identify the site where it had found nuclear material. An unnamed source told AFP news agency that there was no indication it had been used for processing uranium, but it could have been used to store the material.

The IAEA added that Iran was continuing to enrich uranium to a purity of up to 4.5% – in violation of the 3.67% threshold agreed under the 2015 deal.

The watchdog is still analysing samples taken in September from two suspected former nuclear sites, which were opened up to inspectors this year.

Last year, Iran began deliberately and publicly reneging on commitments it had made under an international nuclear accord signed with China, France, Germany, Russia, the UK and the US. The move was made in retaliation after US President Donald Trump abandoned the nuclear accord and reinstated crippling economic sanctions.

Under the agreement, Iran is only allowed to produce up to 300kg of enriched uranium in a particular compound form (UF6), which is the equivalent of 202.8kg of uranium.

Low-enriched uranium – which has a concentration of between 3% and 5% of U-235 isotopes – can be used to produce fuel for power plants. Weapons-grade uranium is 90% enriched or more.

Shortly after the IAEA report was released, King Salman of Saudi Arabia – Iran’s regional rival – said in a speech that the world should adopt “a decisive stance” to ensure Tehran did not acquire weapons of mass destruction.

“The kingdom stresses the dangers of Iran’s regional project, its interference in other countries, its fostering of terrorism, its fanning the flames of sectarianism and calls for a decisive stance from the international community against Iran that guarantees a drastic handling of its efforts to obtain weapons of mass destruction and develop its ballistic missiles programme,” he said.

During a UN General Assembly meeting, Iranian ambassador Majid Takht Ravandchi said his country and the IAEA “have agreed to work in good faith” and resolve questions around safeguards.

US President-elect Joe Biden has signalled his willingness for America to rejoin the nuclear deal, and offered Iran a “credible path back to diplomacy.”

On Wednesday, Iranian President Hassan Rouhani said his country would take “any opportunity” to “lift the pressure of sanctions from the shoulders of our people”.