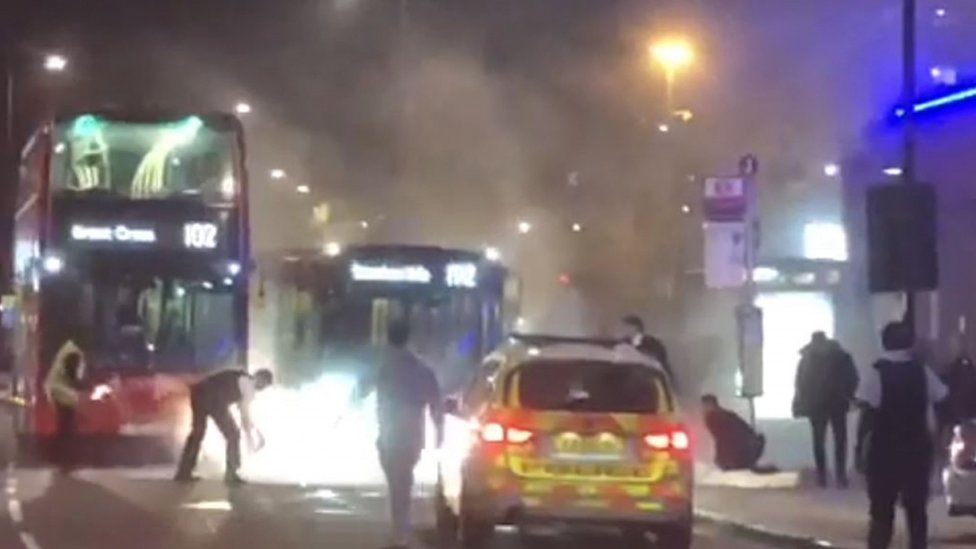 Publishedduration4 hours agomedia captionEyewitness footage shows a man pouring petrol on the ground and setting light to itA police station in north London had to be evacuated after a car crashed into the building.The crash happened shortly before 19:00 GMT in Edmonton. An eyewitness reported seeing a man then pouring petrol over the car and…

A police station in north London had to be evacuated after a car crashed into the building.

The crash happened shortly before 19:00 GMT in Edmonton. An eyewitness reported seeing a man then pouring petrol over the car and setting it alight.

Footage, posted on social media, shows a vehicle partially embedded in the entrance of the building. The Met Police said the car was being examined.

A man in his 40s has been arrested on suspicion of arson and other offences.

Both the London Ambulance Service and London Fire Brigade were called to the crash on Fore Street.

Police said officers were still at the scene but an earlier cordon had been reduced and staff had returned to the station. No injuries have been reported.

“At this time this remains a local investigation but is being supported by counter-terrorism officers,” the Met added.

Enfield Council leader Nesil Caliskan had earlier described the crash as a “major incident” and urged people to avoid the area.

Store manager Ogur Mazlum, 34, witnessed the moment the car crashed into the building.

His wife Serife Mazlum said: “He literally just walked out (of his shop) to just call me and see if everything’s OK at home.

“Then he said I have to shut the phone quickly… that was when the car crashed into the front of the police station.”

A man has been detained in connection with the incident.

The vehicle remains at the scene. Specialist officers are in attendance while it is examined.

Mrs Mazlum said her husband, who speaks limited English, saw that the car had crashed through an exterior glass entrance to the police station and a man was trying to get through a second barrier.

“He was insisting on trying to get inside, but the glass door wouldn’t break anymore so he couldn’t get any closer,” she added.

“Then he casually got out of the car with a tank of petrol. He poured it down from the car into the middle of the road and then he just set it on fire.”

Video footage of the immediate aftermath shows police officers tackling the man and putting out the flames.

Mrs Mazlum said another man watching the scene from across the street ran to intervene after the driver had set the fuel alight.

“He pinned [the driver] to the ground just as the police was arriving,” she added.

“So by the time the police came and got out of the cars the citizen had already slammed him to the ground.”

London Mayor Sadiq Khan said he had been in “constant contact” with Metropolitan Police Commissioner Cressida Dick about the incident.

Writing on Twitter, he said: “I’m grateful to the police officers and other emergency services who brought the situation under control and continue to investigate the incident.”

Latest news and stories from London