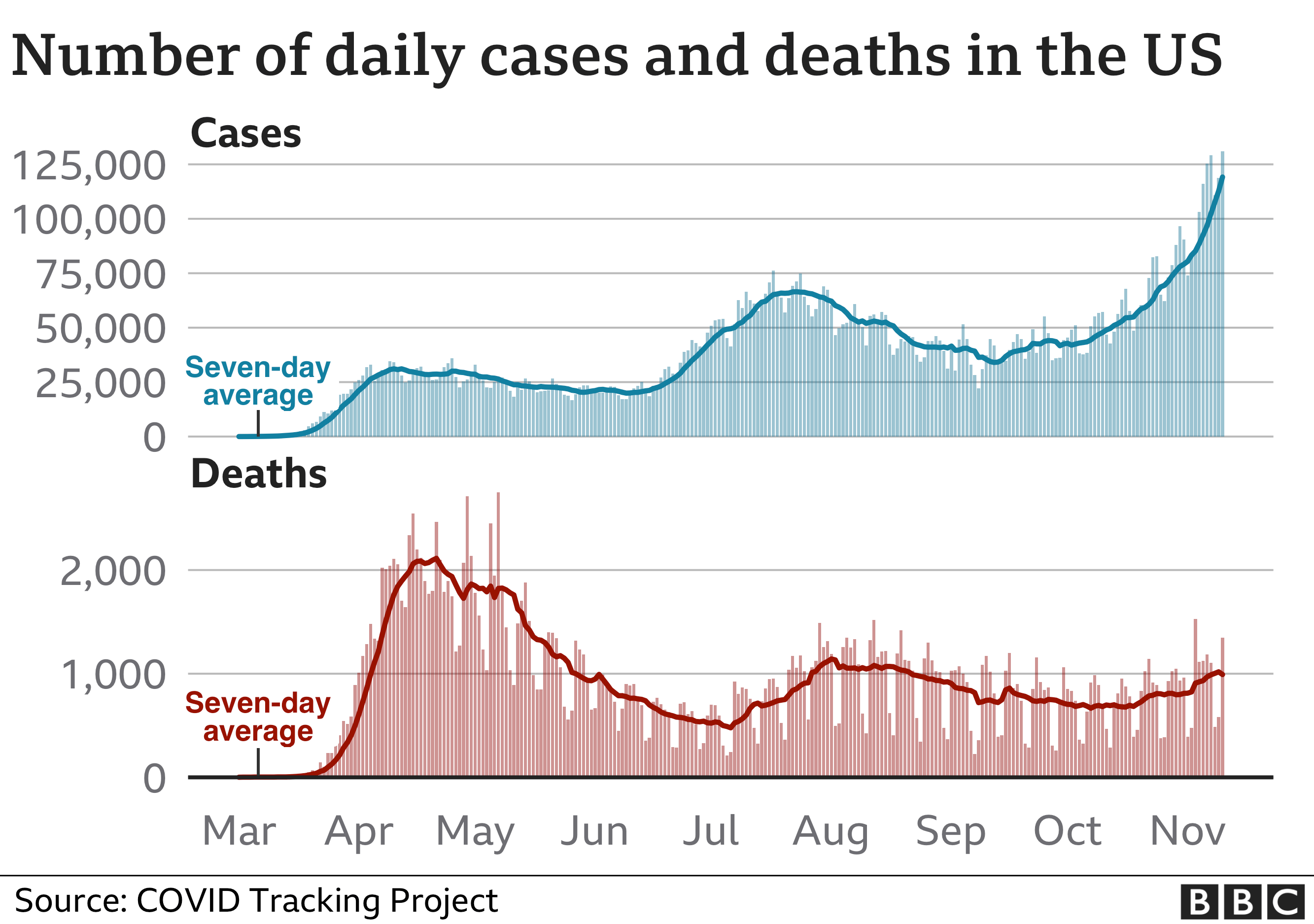 Publishedduration4 hours agoimage copyrightGetty Imagesimage captionLate-night gatherings have been identified as a key source of infection spread in New YorkNew York has introduced new restrictions aimed at curbing coronavirus, with Mayor Bill de Blasio warning it was the city’s “last chance” to stop a second wave.Bars, restaurants and gyms must close by 22:00 and people…

Bars, restaurants and gyms must close by 22:00 and people can only meet in groups of 10 or less.

The US is seeing a surge in coronavirus – a record 61,964 Americans were in hospital on Tuesday.

An average of over 900 people a day are now dying with the disease.

More than a million new cases in November pushed the total confirmed cases to over 10 million nationally with 239,732 deaths so far.

The US has been seeing more than 100,000 new cases per day over the last 10 days in what experts say may be a worse outbreak than those seen in the spring and summer.

Experts warn hospitals across the country could soon be overwhelmed.

On Wednesday a member of President-elect Joe Biden’s Covid-19 advisory panel said a four to six week lockdown could bring the pandemic under control.

Dr Michael Osterholm said that the government could borrow enough money to cover lost income for businesses during a shutdown.

“We’re seeing a national and global Covid surge, and New York is a ship on the Covid tide,” state Governor Andrew Cuomo said on Wednesday.

This is our LAST chance to stop a second wave.
We can do it, but we have to act NOW.

If the rate of spread of infection continued to rise, Mayor Blasio said the New York City’s public school system would close and children would begin online classes.

“This is our last chance to stop a second wave. We can do it, but we have to act now,” Mr de Blasio tweeted.

New York City was badly hit by the virus earlier this year when nearly 18,000 people died with Covid-19 in March, April and May, according to the city’s Department of Health and Mental Hygiene.

States across the US have broken new case records this week. On 10 November, Texas became the first state to hit one million total cases. If Texas were a separate country, it would rank 11th in the world for most cases.

Other states, including Illinois, Wisconsin, Minnesota, California and Florida, have also seen numbers rise. CBS News reports 15 states saw the numbers of patients in hospital due to the virus double in the last month.

Some hospitals, such as in Idaho and Missouri, have had to turn patients away because they ran out of room.

State leaders have been re-imposing pandemic restrictions as a result. Residents of Wisconsin and Nevada have been urged to stay at home for two weeks. In Minnesota, bars and restaurants must shut by 22:00.

On Tuesday, Mr Osterholm warned of a “perfect storm”. Speaking to the CBS This Morning programme, Mr Osterholm said there was “no question that our hospitals are about to be overrun”. He noted “the darkest days of this pandemic between now and next spring”, before the vaccine arrives.

Mr Osterholm, who heads the infectious disease research centre at the University of Minnesota, said during the summer spike after the Labour Day national holiday, new cases rose to 32,000 a day.

The same day, US infectious disease chief Dr Anthony Fauci offered some hopeful news. He said the new Covid vaccine by Pfizer was expected to go through an emergency authorisation process in the next week or so. Human trials suggest it is 90% effective.

Dr Fauci told MSNBC: “I’m going to look at the data, but I trust Pfizer, I trust the [Food and Drug Administration]. These are colleagues of mine for decades, the career scientists.”

Amid the ongoing outbreak, the US Centers for Disease Control and Prevention (CDC) has updated its research around masks, saying that wearing one not only protects others but also the person wearing the mask.

Previous guidance had rested on the idea that the main benefit of mask-wearing came from potentially stopping an infected person transmitting Covid to others.

The CDC referenced several studies, including one case where two Covid-positive hair stylists interacted with 139 clients – but of the 67 clients researchers tested, none developed an infection. The stylists and all clients had worn masks in the salon.

Another study looking into the outbreak aboard the UUS Theodore Roosevelt aircraft carrier found mask-wearing seemed to have reduced the risk of virus transmission by 70%, the CDC said.