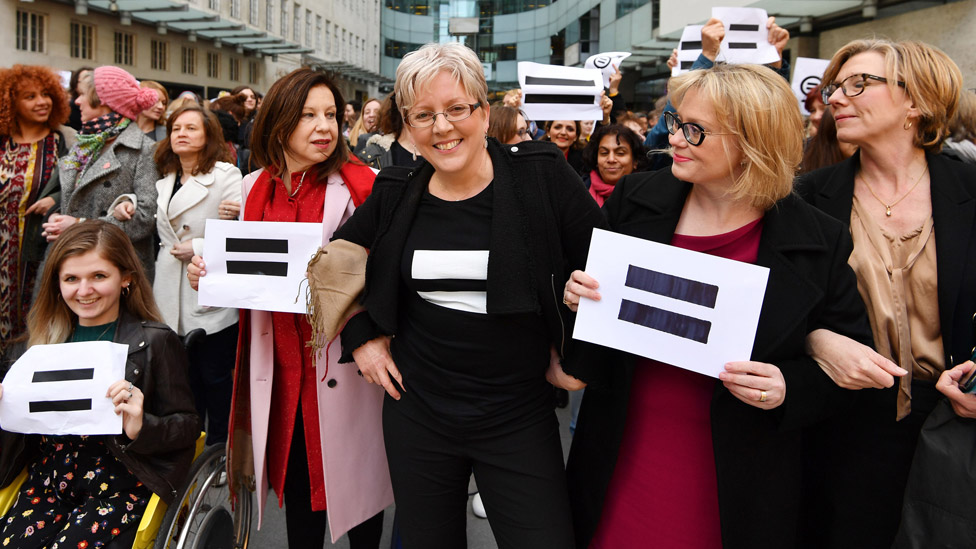 Publishedduration42 minutes agoimage copyrightPA Mediaimage captionCarrie Gracie (centre), pictured in 2018, received back pay and an apology from the broadcaster that yearFormer BBC journalist Carrie Gracie has said a report that found no unlawful pay discrimination against women at the BBC “feels like a whitewash”.The Equalities and Human Rights Commission’s investigation came after presenters like…

Former BBC journalist Carrie Gracie has said a report that found no unlawful pay discrimination against women at the BBC “feels like a whitewash”.

The Equalities and Human Rights Commission’s investigation came after presenters like Gracie and Samira Ahmed were revealed to have been underpaid.

The watchdog said the BBC didn’t break the law but must “increase transparency and rebuild trust” with women.

The BBC Women group said it was “deeply disappointed by the findings”.

The commission defended its “robust investigations”, but a statement from BBC Women, which represents female employees, said the findings “do not reflect our experiences”.

The report “does not address the systemic issue of unequal pay suggested by the hundreds of pay increases and settlements the BBC has made to women”, the group added.

Gracie won back pay and an apology in 2018 after resigning as BBC China editor following the discovery that she was paid less than male colleagues.

She took issue with the way the commission started by looking at 1,000 complaints from female BBC employees, whittled them down to 40, before focusing on 10.

“Seriously?” She wrote on Twitter. “FOLLOW THE ££ INSTEAD: #BBC forced to pay out to 100s of #bbcwomen. Moral of story: don’t rely on regulator but stay strong, calm, united + JUSTICE WILL PREVAIL.”

More than 500 women have been awarded rises since 2017 after making pay complaints. Gracie left the BBC in August after 33 years at the corporation.

Meanwhile, earlier this year an employment tribunal found that Newswatch presenter Ahmed had been paid six times less than Jeremy Vine received for doing similar work on Points of View.

And Sarah Montague received a £400,000 settlement after being paid less than former Radio 4 co-presenters like John Humphrys and Nick Robinson.

The Equalities and Human Rights Commission (EHRC), which launched its investigation in March 2019, said the BBC accepted that “its historical practices were not fit for purpose and has made significant changes since 2015”.

BBC director general Tim Davie pledged to implement the report’s recommendations, saying: “We have to work even harder to be best in class.”

EHRC interim chair Caroline Waters said it was “easy to see why trust between some women at the BBC and the organisation has broken down”.

She said: “Many women felt their voices were not being heard and have been left feeling confused as to how decisions about their pay have been made.

“This took a heavy emotional toll on those involved in the process and the strength of feeling of women at the BBC should not be understated.

“While we have not found any unlawful acts in our investigation, repairing the damage caused by these issues requires continued leadership and we hope the BBC board takes forward our recommendations.”

Asked why the EHRC found no unlawful pay discrimination despite the high-profile cases, Suzanne Baxter, who led the investigation, explained: “Our work here has been carried out under the equality act, and has a different remit to an employment tribunal.

“I do understand why there might be some surprise. Our investigation is broader, we’re gathering every piece of evidence we can, which isn’t always available to a tribunal.

“We think we’ve done robust investigations. The important thing here is the recommendations we make.”

She said they did find “real concerns about the overall processes which led to concerns about trust and transparency”, and acknowledged that “this is about real lives [of the women] at the centre of this investigation”.

She added: “We talked to them, they had gone though humiliation, anxiety, insomnia, were signed off work. One woman waited 370 days, another woman was passed between eight people in 10 months. These are real people having a terrible time.”

Ms Baxter said she was “very confident our recommendations will make a difference to women going forward”.

The recommendations include better record keeping and a more transparent grievance process that it is done within a “reasonable time limit”.

The BBC has also been told to continue improving training and guidance for BBC staff making decisions about pay, and reviewing pay frameworks regularly.

Welcoming the report, Mr Davie said: “Trust is vitally important and as an organisation that serves the public, the BBC must continue to lead the way on pay transparency and fairness. We are committed to building a truly inclusive culture.

“We agree with the Commission that we should continue to deliver on our reform programme which began in 2015. We accept every one of their recommendations and will implement them.”

The National Union of Journalists (NUJ) said many members would feel the report “doesn’t address their lived experiences” and there were “still vital changes that need to take place”.

‘Still improvements to be made’

Broadcasting union Bectu said the report “highlights the importance of transparency in pay and terms and conditions” and there are “still improvements to be made, particularly in relation to pay progression”.

Differences between men and women were exposed when the corporation published its first star salaries list in 2017. Only two of the top 14 earners were women, and men made up about two-thirds of the overall list.

The corporation said most of the 500 salary increases rises awarded to women since 2017 related to the issue of fair pay rather than equal pay, and that 99% of pay queries had now been resolved.