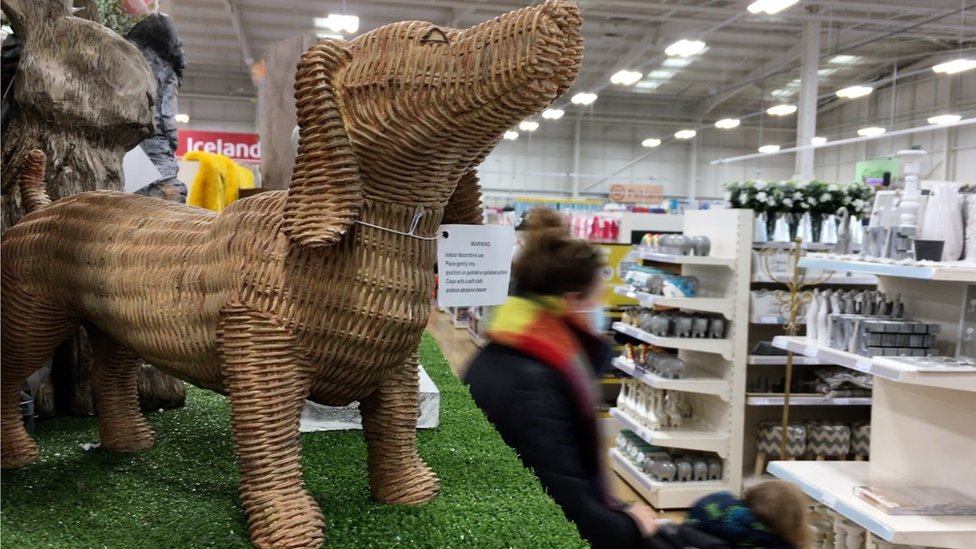 By Vivienne NunisBusiness reporter, BBC NewsPublishedduration3 hours agoimage captionGoods for sale in The Range during lockdownRetailers and supermarkets have been accused of taking advantage of lockdown loopholes for Christmas trading while other stores remain closed.Homeware chain The Range has been encouraging consumers in England to “Shop Christmas in-store and online”. The firm – which sells…

Retailers and supermarkets have been accused of taking advantage of lockdown loopholes for Christmas trading while other stores remain closed.

Homeware chain The Range has been encouraging consumers in England to “Shop Christmas in-store and online”.

The firm – which sells groceries alongside soft furnishings and art supplies – says it’s acting within the rules.

But traders whose businesses are closed say some companies aren’t playing fair.

A competitor to The Range who didn’t want to be named, told the BBC: “It’s the wild west out there. The legislation was rushed and now government has lost control, with some retailers taking liberties in a very unfair playing field.”

But The Range said it was following government guidance.

“The Range is classed as an essential retailer and is complying with all aspects of government legislation and guidelines,” a spokesman for the firm said.

“Our stores trade in a fully Covid-compliant manner, creating a safe environment for our customers and staff.”

Martin Coles-Evans runs a gifts and homeware store called Hargreaves & Sons in Buxton, Derbyshire. The business has been going for more than 150 years, but now he says times are “tough”.

“Shops like ourselves, we’re following the rules and we’re making people stay safe so we’re closed, and yet these bigger companies are trying on loopholes left, right and centre to stay open, when really they shouldn’t be,” he said.

“It does seem to be they’re mopping up all the Christmas trade while we’re just limping along, struggling trying to get by with some government support.”

The business owner says he visited a garden centre at the weekend that was also selling clothing, shoes, books, home décor, candles and photo frames. He’s written to his local MP to voice his concerns but so far he’s heard nothing back.

All non-essential retail stores – as well as hospitality and leisure venues – must remain closed in England from 5 November to 2 December.

“Lidl is stacked high with wooden toys and books. It feels like the big supermarkets are capitalising on the fact they are able to sell non-essential goods alongside their essentials, in the run up to Christmas,” she said.

Lidl says it is closely following government guidance, which states: “A business selling a significant amount of essential retail may also continue to sell goods typically sold at non-essential retail. For example, a supermarket that sells food is not required to close off or cordon off aisles selling homeware.”

“Why is that allowed to happen?” asks Ms Stirling Baker. “It’s definitely given the bigger supermarkets and retailers a massively unfair advantage.”

Only stores that sell non-essential goods on another floor or in a different building are required to close those parts of their premises, according to the guidance.

The Department for Business, Energy, and Industrial Strategy (Beis) said the restrictions were necessary to slow the spread of coronavirus.

“These restrictions have been brought in because we have to limit social contact in order to control the virus, protect the NHS and save lives,” a spokeswoman said.

“We recognise this continues to be a very difficult period for businesses, which is why we’ve confirmed that there will be a full package of financial support in place, with the furlough scheme extended and grants worth up to £3,000 per month for businesses legally required to close.”

But just six weeks out from Christmas, many store owners say that help doesn’t go far enough to compensate business owners who’ve been forced to close.

“I don’t think the government truly understand how retail works in the UK,” says William Coe, who runs Coe’s department store in Ipswich.

“They think if we pay their wages and give them a little towards overheads, they’ll be alright. But these are key trading weeks that have massive implications for cash flow and stock and ongoing implications.”

Mr Coe says he understands the government is in a difficult position, “but if you tell people they have to shut, you have to give them adequate support.”

Other “non-essential” retailers including bookstore owners and clothing firms have criticised the government’s handling of the second coronavirus lockdown.

James Daunt, the boss of Waterstones, told the BBC that “arbitrary lines” had been drawn, with smaller bookshops forced to shut, while large newsagents such as WHSmith, which sell books alongside other items, were able to stay open.

But a spokesman for WHSmith said the chain isn’t really benefitting from the rules, since lockdown means there are far fewer shoppers on High Streets anyway.

He said the company is operating in line with government guidance, which allows newsagents and post offices to keep trading.