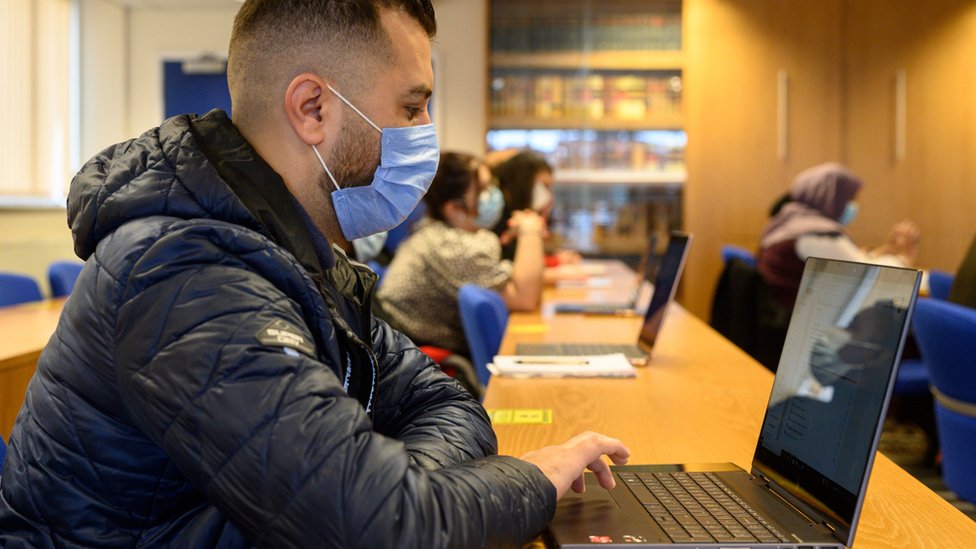 By Hannah RichardsonEducation and social affairs reporterPublishedduration1 hour agoimage copyrightGetty ImagesAn evacuation-style operation is to be mounted to get students home safely for Christmas, once the national lockdown in England ends.Working with their local public health bodies, universities will allocate their students travel slots during the week of 3 to 9 December.Universities will have to…

An evacuation-style operation is to be mounted to get students home safely for Christmas, once the national lockdown in England ends.

Working with their local public health bodies, universities will allocate their students travel slots during the week of 3 to 9 December.

Universities will have to move all teaching online from 9 December, so students can study from home.

As many students as possible will be offered rapid result Covid tests.

These are set to begin at the end of November, and universities in areas with higher rates of the disease will be prioritised.

However, any student who tests positive for Covid will be required to self-isolate for 10 days under the current guidelines. But the timing means they would still be able to get back for the Christmas holidays.

The government has now nominated the week after the national lockdown is due to end as a designated “student travel window”, and students are strongly advised to travel during this period.

The Department for Education says universities will now start working with their local public health teams and local transport operators to manage the mass movement in a staggered fashion.

Universities should soon begin contacting students with allocated travel days, and some may hire coaches to help with the transportation.

The department insists there is enough capacity on the nation’s public transport system for this to take place safely, adding that many students will have their own transport or be collected by parents.

BBC Scotland expects that students will be tested twice, five days apart, with those testing negative on both occasions able to travel home.

Dr Tim Bradshaw, chief executive of the Russell Group of research universities, welcomed the government’s confirmation on the end of term.

But he said: “However, a mandatory cut-off date for in-person teaching to deliver a ‘student travel window’ does create practical challenges for universities, which our members will now work hard to mitigate.”

Students will be required to follow government travel guidance which includes wearing face coverings, avoiding busy routes and times, and only car sharing with their household bubble group.

Anyone wishing to travel after the travel window would have to follow self-isolation restrictions until they leave to be able to travel.

Despite universities’ best efforts, many students contracted the virus within days of arriving on campus. An estimated 40,000 students have become infected whilst in their university towns, leading to thousands having to isolate.

This sparked concerns about infected students bringing the virus back home with them, thus accelerating the spread of the disease.

There were suggestions that students might have to remain at university for an extra two-week period, so they could isolate, before returning home.

But this was criticised by the National Union of Students as likely to have a negative effect on student mental health.

Universities minister Michelle Donelan said the government had worked hard to find a way to allow students home safely for the holidays, whilst limiting the risk of transmission.

“Now it is vital they follow these measures to protect their families and communities, and for universities to make sure they have their well-being support they need, especially those who stay on campus over the break.”

Deputy chief medical officer Dr Jenny Harries said: “The mass movement of students across the country at the end of term presents a really significant challenge within the Covid-19 response.”

University lecturers and the NUS had warned of the risks of bringing 1.2 million students back to universities since the summer, and urged ministers to move courses online as the default.

But the government had defended the continued use of face-to-face teaching.

Responding to the new guidance, NUS president Larissa Kennedy said: “The government have finally listened to our calls to ensure students can travel home safely for Christmas.

“We particularly welcome this mass-testing approach as it equips students with the knowledge to make informed decisions about travel ahead of the winter break.”