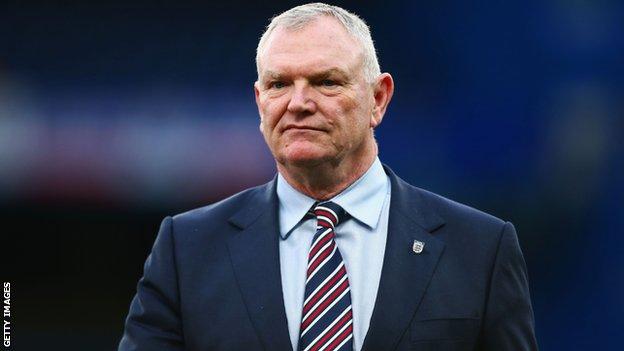 Clarke became Football Association chairman in August 2016The resignation of chairman Greg Clarke is not going to improve diversity at the Football Association, says former England defender Joleon Lescott.Clarke resigned on Tuesday after using “unacceptable” language when referring to black players.Lescott described Clarke’s comments as “very disturbing” and said even thinking about them made him…

The resignation of chairman Greg Clarke is not going to improve diversity at the Football Association, says former England defender Joleon Lescott.

Clarke resigned on Tuesday after using “unacceptable” language when referring to black players.

Lescott described Clarke’s comments as “very disturbing” and said even thinking about them made him “emotional”.

“One hundred percent of black players want to see change, but that’s not going to happen,” he told BBC Radio 5 Live.

The former Manchester City defender believes Clarke’s comments hint at structural problems within the FA and says any successor may be unable to instigate real change.

“So we now expect the next person in line will have heard this and have been a part of this. Now he’s going to step up and we expect that person to take us forward.

“How do you expect change if the people that are in charge have the same mindset, or similar mindset?”

Clarke made the comments while speaking to the Department for Digital, Culture, Media and Sport (DCMS) select committee via video link.

He used the term as he was talking about the racist abuse of players by trolls on social media.

Clarke received further criticism for comments he made referring to gay players making a “life choice”, about the different career choices of people from black and Asian communities, and about a coach telling him young female players did not like having the ball hit hard at them.

Former Huddersfield and Gillingham striker Iffy Onuora, who is an equalities officer at the Professional Footballers’ Association, says it shows more education is still needed about the effect of certain words and phrases and why they are offensive.

“It’s just so outdated. There’s certain terms we don’t use any more about disabled people or gay people – we’ve moved on,” he told BBC Radio 5 Live.

“It’s as much the message it sounds. Don’t forget people in the FA are looking up to the chairman to provide leadership, to provide that voice and to drive on some of the initiatives they are doing, as is everybody in the game.”

Clarke’s departure means there are now nine people remaining on the FA board, including acting chairman Peter McCormick.

Of those, four board members are women and one is from a black and minority ethnic (BAME) background.

That is in line with reforms agreed by the FA in 2017, which pledged to increase BAME representation on the board to at least 10%, have 10% representation from the LGBT+ community and 40% female representation.

It also pledged to add 11 new members to improve the diversity of the 122-strong FA council, which was overwhelmingly made up of white men over 60.

Dame Heather Rabbatts, who spent five years as the only woman and BAME member on the FA board before resigning in 2017, said Clarke’s comments “revealed the fault line” in the sport.

“The leadership and management of football, one of the most diverse games on the planet, is still controlled, fundamentally, by white men,” she told BBC Radio 4’s Today programme.

Mark Bullingham, the FA’s chief executive, said the recruitment process would be an open system.

“Our process will be open and conform to the Diversity Code, ensuring that we are able to select the best candidate from a diverse talent pool,” Bullingham said.

Will there be change?

“It’s outrageous to be honest – it sounds like something from 20, 30 years ago,” he told 5 Live. “That language has been inappropriate for decades now so it shows in some ways that perhaps he’s lived in an echo chamber where things like this are acceptable to say.”

Match of the Day presenter and former England striker Gary Lineker told ITV’s Good Morning Britain the organisation was full of “lots of old white men” and said he believes real change can only be implemented if the FA, English Football League and Premier League work together.

Former England winger John Barnes said the issue of racism needed to be tackled by society as a whole, not just football.

“A lot of people are now looking at this problem as if it’s unique to football,” he told BBC Radio Wales.

“But if you look at the higher echelons of any institution, a lot of white men over 50 have the same ideas. This is the way society is and this is what we have to tackle, society as a whole.”

Bernstein was among a group who this month launched a manifesto for change called ‘Saving Our Beautiful Game’, calling for changes at the FA as well as an independent regulator of English football.

“The FA has been resistant to serious change over the years and frankly if you have an organisation that is not modern, that has not been updated, then this sort of thing is much more likely to happen,” he told 5 Live.

“I hope there are progressive people across the board who feel strongly about this. I think the FA has to think very carefully about the sort of person who is brought forward to lead the organisation next time.”

Onuora thinks the code is a “step in the right direction” but says this incident highlights the need for further change.

“It’s not the answer to everything,” he said. “Behaviours will have to change as well and ways of discussing these things, as we have seen today.

“But it’s a step in the right direction and that’s what the code is meant to represent.”

Former Manchester United and England striker Andy Cole remains optimistic things are moving in the right direction and says people should wait to see whether the new code makes a positive impact.

“We need to make progress now,” he told BBC Breakfast. “I’m hoping, seeing what we are going through now, that within six months there will be progress, and I want to see where we are at.”