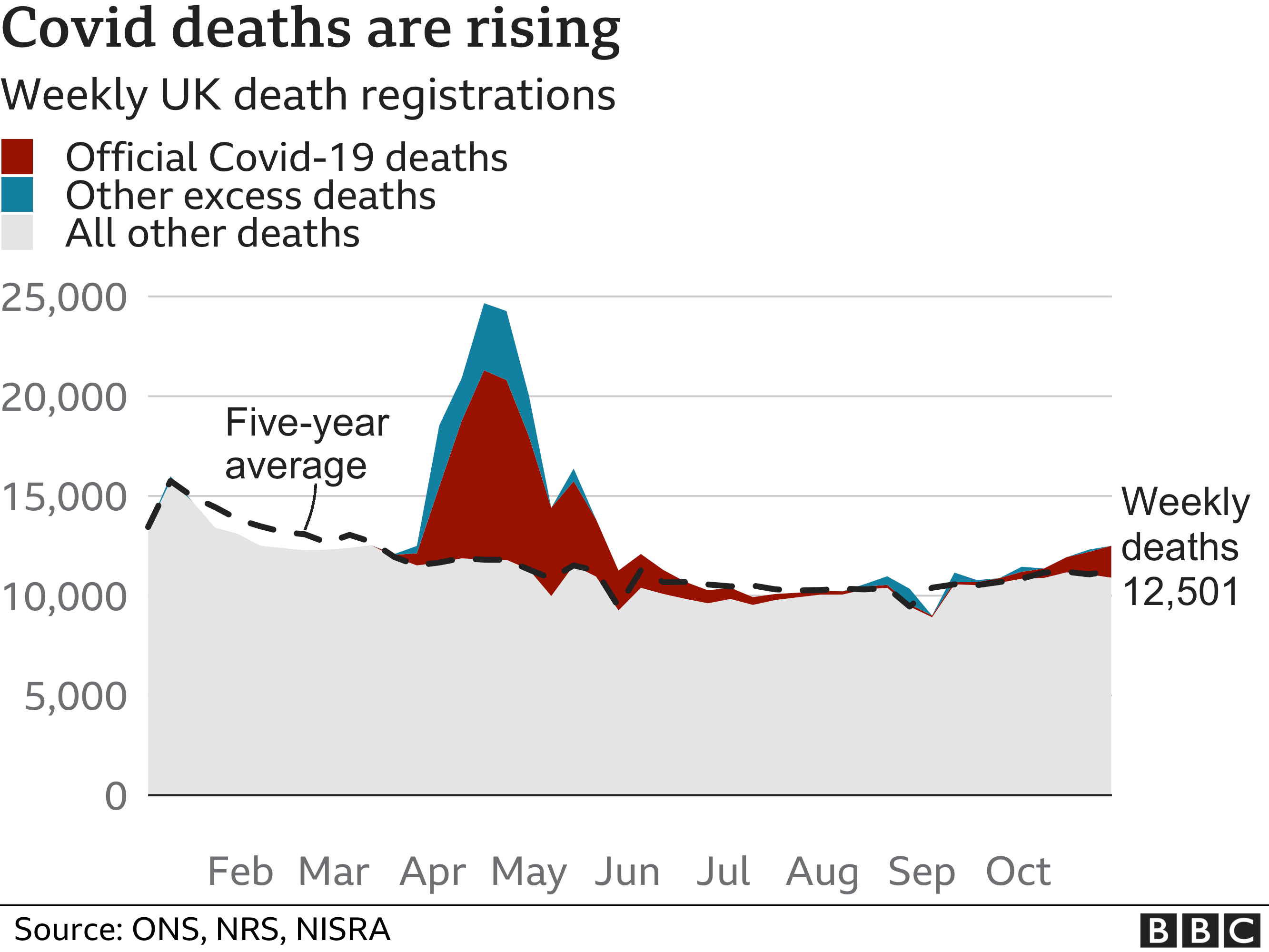 Publishedduration20 minutes agoimage copyrightGetty ImagesThe UK has become the first country in Europe to pass 50,000 coronavirus deaths, according to the latest government figures.A total of 50,365 people have died within 28 days of a positive Covid test, up 595 in the past 24 hours.The UK is the fifth country to pass 50,000 deaths, coming…

The UK has become the first country in Europe to pass 50,000 coronavirus deaths, according to the latest government figures.

The UK is the fifth country to pass 50,000 deaths, coming after the United States, Brazil, India and Mexico.

Prime Minister Boris Johnson said the figures showed, despite hopes for a vaccine, “we are not out of the woods”.

He said: “Every death is a tragedy,” but added: “I do think we have got now to a different phase in the way that we treat it.”

A further 22,950 cases of coronavirus were also recorded on Wednesday, government figures show.

There have been some 1.2 million confirmed cases in the UK since the epidemic began, and more than 185,000 people have been admitted to hospital with the virus.

The UK’s Covid death toll has reached a grim and tragic milestone – and illustrates what a devastating impact the pandemic has had on the country.

But one figure alone cannot tell the full story. The burden has not been felt equally.

The single biggest factor has been age – with more than nine in 10 deaths in the over 65s.

Poorer areas and ethnic minorities have also been disproportionately affected.

Deaths from other causes have also risen as people have gone without treatment.

The UK has on most measures seen one of the highest death rates in the world.

Blame, understandably, has been laid at the government’s door. It has been criticised in particular for being too slow to lockdown and for its record on testing and tracing.

But the UK is not alone in struggling. Similar debates have been had in Italy, Spain and France.

And the sad reality is this figure will keep climbing in the months to come.

But there is now at last some real hope that, with a vaccine looking likely, the toll will be much, much less next year.

The government’s death figures only include people who died within 28 days of testing positive for coronavirus – but two other ways of measuring deaths give higher overall figures.

The first includes all deaths where coronavirus was mentioned on the death certificate, even if the person had not been tested for the virus. The most recent figures suggest there had been more than 60,000 deaths by 23 October, by this measure.

The second is a measure of “excess deaths” – the number of deaths over and above the usual number at this time of year.

Deaths normally do rise at this time of the year, but the latest data from the Office for National Statistics and its counterparts in Scotland and Northern Ireland show the second wave of the virus has pushed the death rate above the average seen over the past five years.

The latest figures come after officials said no decision has yet been made on how people under the age of 50 should be offered a Covid vaccine.

The current priority list of people who would get a vaccine in “phase one” starts with those living and working in care homes, then – in stages – everyone over 60 years old, then adults with a health condition that puts them at greater risk from the virus, then people aged over 55 and finally those over 50.

Attention is turning to how a vaccine will be rolled out after Pfizer and BioNTech revealed their vaccine protects more than 90% of people from developing Covid symptoms.

But the prime minister said on Monday that news of the vaccine should not lead people in the UK to “slacken our resolve at a critical moment”, adding: “There is a long way before we have got this thing beat.”

Speaking at a Downing Street news conference, Mr Johnson said levels of Covid-19 remained significant and were doubling in many areas, with recent data showing one in 90 people in England currently has the virus.

Please enable JavaScript or upgrade your browser to see this interactive

Restrictions have been tightened across the UK in recent weeks. In England, a new four-week lockdown started last Thursday – replacing the three-tier system until 2 December.

On a visit to a Tesco distribution centre in south-east London on Wednesday, the prime minister said England must “get through this current period of tough autumn measures” to “hopefully” curb the spread of the virus enough to allow Christmas to be “as normal as possible for as many people as possible”.

Meanwhile, pubs reopened and travel restrictions were lifted in Wales on Monday, as it ended a two-week “firebreak” lockdown.

In Scotland, there is now a five-tier system of virus alert levels with different measures in place in different parts of the country. The tiers are numbered from zero to four, with level four requiring the introduction of lockdown restrictions for that area.

If you would like to send us a tribute to a friend or family member who died after contracting coronavirus, please use the form below.

Please remember to include a photo of your loved one and their name. Upload your pictures here. Don’t forget to include your contact details, so we can get in touch with you.

We would like to respond to everyone individually and include every tribute in our coverage, but unfortunately that may not be possible. Please be assured your message will be read and treated with the utmost respect.

If you are reading this page and can’t see the form you will need to visit the mobile version of the BBC website to submit your tribute.