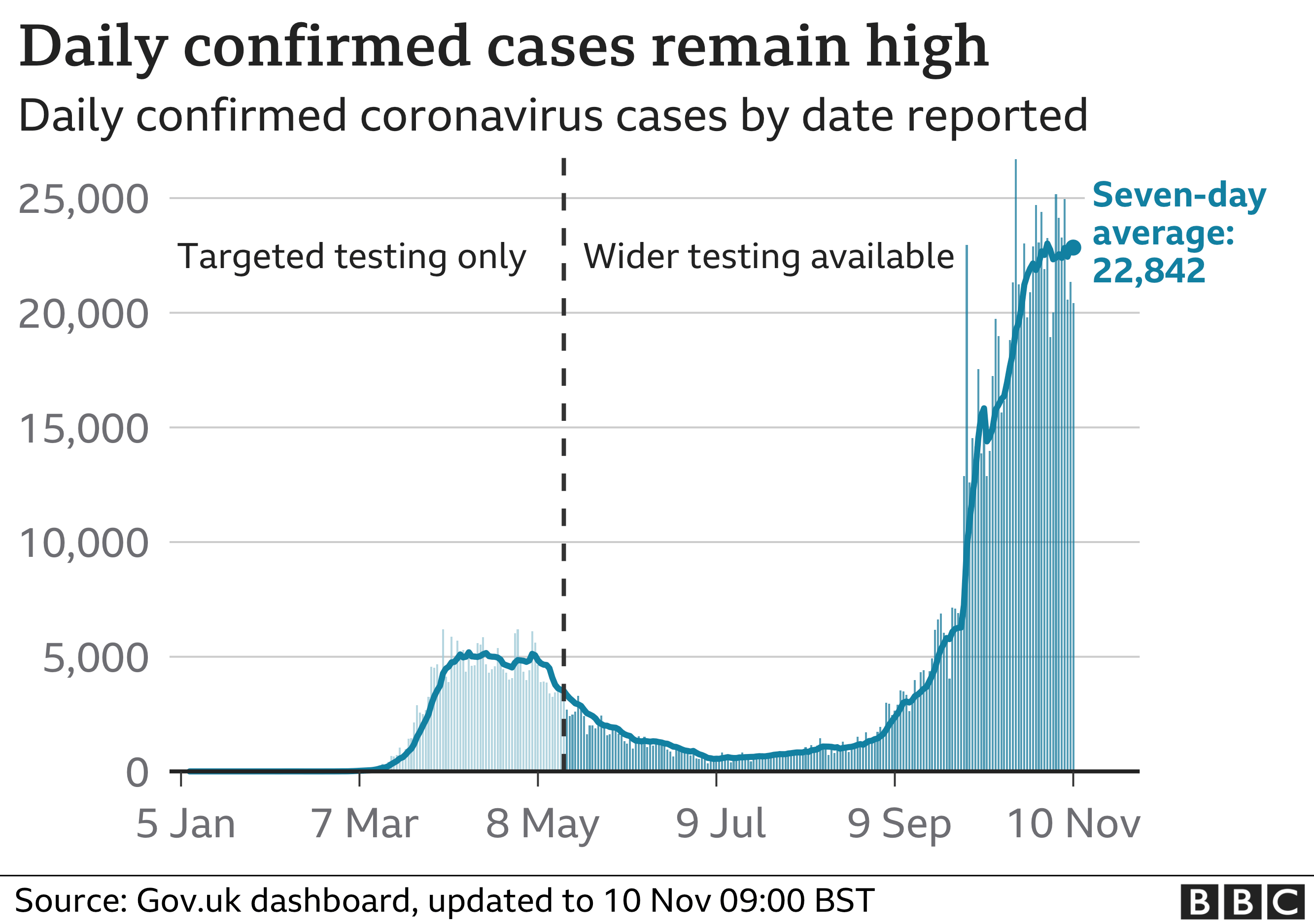 By Hannah RichardsonEducation and social affairs reporterPublishedduration25 minutes agomedia captionThe BBC’s Dan Johnson takes a look at one of the first university testing facilitiesAn evacuation-style plan will aim to get students home safely for Christmas.Students in England are to be allocated departure dates during a “student travel window” between 3 and 9 December, to minimise…

An evacuation-style plan will aim to get students home safely for Christmas.

Students in England are to be allocated departure dates during a “student travel window” between 3 and 9 December, to minimise the risk of them spreading Covid-19.

In Wales, they are being asked to travel by 9 December at the latest.

Many will be offered rapid result tests, while teaching will move online from 3 December in Wales and 9 December in England.

The Scottish government wants as many as possible of the 80,000 or so students going home for Christmas to be offered voluntary tests before they travel.

Northern Ireland is expected to publish plans for students’ return in the coming days.

One union said the plan for a week-long travel window in England “leaves little room for error”.

Universities Minister Michelle Donelan said the government chose the week after the four-week national lockdown in England ends on 2 December because “students will pose a much reduced risk to their loved ones and their community”.

She told BBC Breakfast the timing means that anyone who develops symptoms on 9 December will still “have enough time to isolate and then return home for Christmas”.

Ms Donelan confirmed that students will not need to have a negative test result before travelling home.

Students are strongly advised to travel during the travel window.

“This is a choice. If they choose to leave after [9 December] they will run the risk of potentially not getting home for Christmas with that isolation window,” Ms Donelan said.

‘I am desperate to go home’

Jiya Saggu, 20, is torn between desperately wanting to go home and wanting to keep her medically vulnerable family safe.

Her 15-year-old sister had a kidney transplant some years ago and still has a weakened immune system, as does her mother who has rheumatoid arthritis.

Also her uncle, one of the earliest cases of Covid in England, spent weeks on a ventilator before finally recovering.

She says: “That really brought home the fact that if any of my family get this virus, it would be devastating.”

Reading the plans in the news to test students, before helping them get home, brought the third year University of Durham student “a great sense of relief because it is a possible way out”.

“I think having designated days for people to leave may be a little difficult, especially within a week,” she says.

“But if it means I can get home safely then that’s all that matters.”

Dr Jo Grady, general secretary of the University and College Union, said allowing one week for around one million students to travel in England “leaves little room for error”.

“If the government instead told universities to move online now it would provide much more time to stagger the movement of students and better protect the health of staff, students and their wider communities,” she said.

The Department for Education said universities in England would now start working with their local public health teams and local transport operators to manage the mass movement in a staggered fashion.

They should soon begin contacting students with allocated travel days, and some may hire coaches to help with the transportation.

UK coach operator National Express said it was talking to universities about putting on extra services to help get students home.

The Department for Education insisted there was enough capacity on the nation’s public transport system for the evacuation-style plan to take place safely, adding that many students would have their own transport or be collected by parents.

Ms Donelan described the roll-out of rapid result tests to as many students as possible in England as a “complementary element” to the travel window.

She said the government wants to “facilitate as much testing as possible”, but will target universities in areas with higher infection rates and proportions of vulnerable students.

The distribution is set to begin at the end of November.

Any student who tests positive will be required to self-isolate for 10 days under current guidelines.

Scottish higher education minister Richard Lochhead confirmed Scotland would be part of the UK-wide programme of asymptomatic testing for students.

He said students would be advised to only go out for essential reasons, including exercise, for two weeks before going home for Christmas and added there would be “staggered and early departures” home.

He also said Scottish universities would be asked to make adjustments to in-person teaching and assessments to allow students time to get home at the end of term.

De Montfort and Durham universities have been running pilot projects for rapid Covid testing, including identifying those who might be infectious but have no symptoms.

Prof Jacqui Ramagge, executive dean of the science faculty at Durham University, said students who receive a positive test result from these then undertake a PCR (polymerase chain reaction) test – the type you get in NHS centres – to confirm their status.

That is because the PCR tests are “the ones that are legally required,” she added.

She said mass testing of students is “absolutely essential”.

“So many people in the age group that our students are in are asymptomatic carriers of the virus, and so if we only test those who are symptomatic, we miss a large number of people,” she said.

An estimated 40,000 students have become infected with coronavirus whilst in their university towns.

This sparked concerns about infected students bringing the virus back home with them, thus accelerating the spread of the disease.

There were suggestions that students might have to remain at university for an extra two-week period, so they could isolate, before returning home.

But this was criticised by the National Union of Students (NUS) as likely to have a negative effect on student mental health.

Deputy chief medical officer Dr Jenny Harries said: “The mass movement of students across the country at the end of term presents a really significant challenge.”

University lecturers and the NUS had warned of the risks of bringing 1.2 million students back to universities since the summer, and urged ministers to move courses online as the default.

But the government had defended the continued use of face-to-face teaching.

NUS president Larissa Kennedy welcomed the plans for voluntary tests and urged students to get one.

“We are glad to see this concession from government and we really do think students will be seeking to take these tests and to do this safely,” she told the BBC.