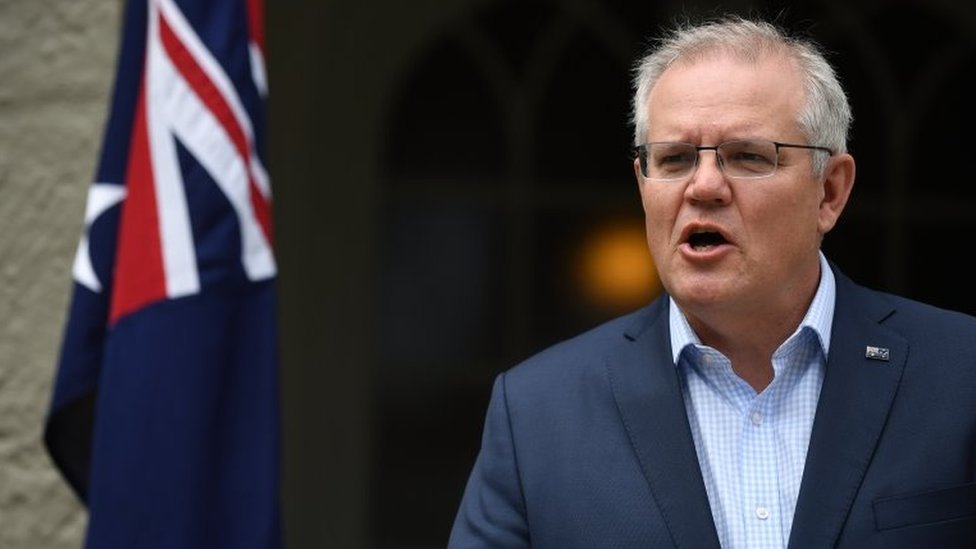 Publishedduration4 hours agoimage copyrightEPAimage captionScott Morrison spoke over his female minister during press conference about sexist conduct in parliamentAustralian Prime Minister Scott Morrison has been criticised for interrupting a senior minister who was responding to a question about what it’s like to be a woman in parliament. Anne Ruston, minister for families and social services,…

Australian Prime Minister Scott Morrison has been criticised for interrupting a senior minister who was responding to a question about what it’s like to be a woman in parliament.

Anne Ruston, minister for families and social services, was asked if the political culture for women had improved.

But she was interrupted a few words into her response.

The incident comes amid reports of sexual misconduct in parliament.

Mr Morrison addressed the investigation in a press conference on Tuesday, where he defended his ministers and said no action would be taken. However his interruption of Ms Ruston garnered more attention on social media.

Ms Ruston was asked whether things had changed in parliament since the introduction of the so-called “bonk ban” in 2018 – which prohibited sexual relations between ministers and their staff.

The ban was introduced by then-Prime Minister Malcolm Turnbull, after his deputy Barnaby Joyce was revealed to have had an affair with a former adviser.

Video of the press conference on Tuesday has been viewed more than 700,000 times.

After being asked again by the journalist, Ms Ruston was able to respond. She said she had felt “wholly supported” during her time in parliament.

The ABC investigation raised questions about the behaviour of male members of the ruling Liberal Party including that of Attorney-General Christian Porter.

His alleged behaviour includes making unwanted advances to women while he was in federal office.

The investigation said Mr Porter had been warned by Mr Turnbull about public behaviour with a female member of staff in a bar. Mr Porter denies the allegations against him.

The investigation also spoke with Rachelle Miller, a Liberal staffer who detailed her affair with married minister Alan Tudge.

She told ABC’s Four Corners programme there was a “significant power imbalance” in relationships between ministers and staffers.

In a statement after the investigation, Mr Tudge said: “I regret my actions immensely and the hurt it caused my family. I also regret the hurt that Ms Miller has experienced.”

On Tuesday, Mr Morrison said he would not investigate the allegations further as they had been “dealt with”.

He praised Mr Turnbull’s ban and said his ministers were in “no doubt about what my expectations are of them”, but added: “I think Australians understand human frailty, and I think they understand the people who work in this place are just as human as anyone else.”