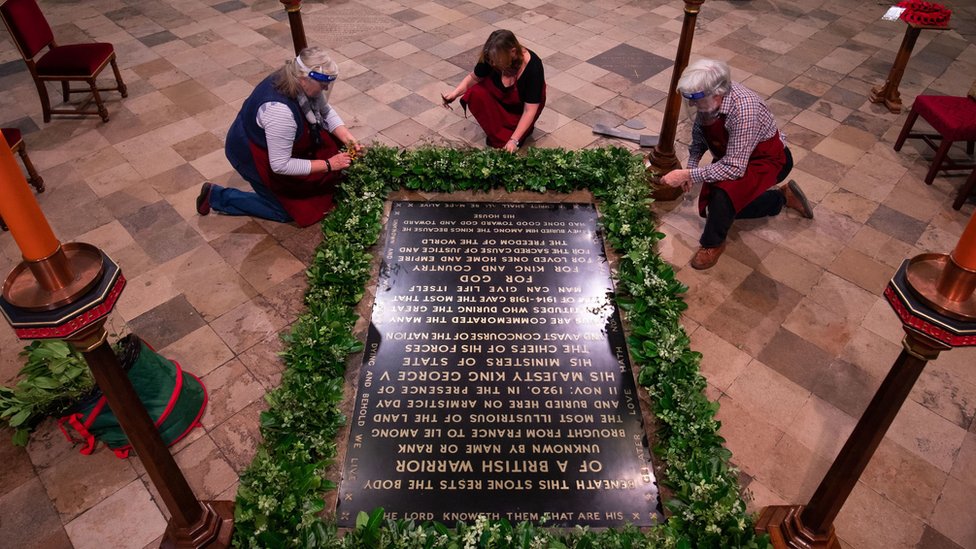 Publishedduration3 hours agoThe centenary of the burial of the Unknown Warrior is to be commemorated at a special service, as Armistice Day is marked across the country.Prince Charles and the Duchess of Cornwall are expected to join figures from government and the armed forces for the service at Westminster Abbey.Then at 11:00 GMT a two-minute…

The centenary of the burial of the Unknown Warrior is to be commemorated at a special service, as Armistice Day is marked across the country.

Prince Charles and the Duchess of Cornwall are expected to join figures from government and the armed forces for the service at Westminster Abbey.

Then at 11:00 GMT a two-minute silence will be held to commemorate those who died in conflict.

Armistice Day marks the day World War One ended in 1918.

The grave of the Unknown Warrior represents those who died in the war and whose place of death is not known or whose remains are unidentified.

The service will be led by the Dean of Westminster, Dr David Hoyle, and will include an address from the Archbishop of Canterbury, Justin Welby.

It will be broadcast live on BBC One and include the national two-minute silence.

The coronavirus pandemic will affect commemorations this year, though Downing Street has confirmed that remembrance services and events can be held as long as there are strict social distancing measures.

Ahead of the commemorations, the Duchess of Cambridge spoke to military families who have lost loved ones, telling them they should be “proud” of their achievements and “the sacrifice and the bravery that they’ve shown”.

The duchess marked Remembrance week by speaking via video call on Monday to three women about how they had been supported by the Royal British Legion.

It comes after the Queen led the nation in marking Remembrance Sunday at a scaled-back service at the Cenotaph in London’s Whitehall.

Social distancing measures were in place and the service was closed to the public for the first time.

Days before, the Queen was seen wearing a face mask in public for the first time when she made a private pilgrimage to the grave of the Unknown Warrior.

The concept of the Grave of the Unknown Warrior was inspired by Rev David Railton, who had served as a chaplain on the Western Front during World War One.

After the conflict he wrote to the then-Dean of Westminster, Herbert Ryle, about his proposal which was later supported by King George V and Prime Minister David Lloyd George.

The body was chosen from four unknown British servicemen – exhumed from four battle areas – by Brig Gen Louis Wyatt, commander of British forces in France and Flanders, and transported back to Britain.

On 11 November 1920, the coffin was draped with a union jack and taken on a gun carriage to the Cenotaph, where the Queen’s grandfather George V placed a wreath upon it.

The King was present as the warrior was buried at the Abbey and dropped a handful of earth from France onto his coffin during the service.