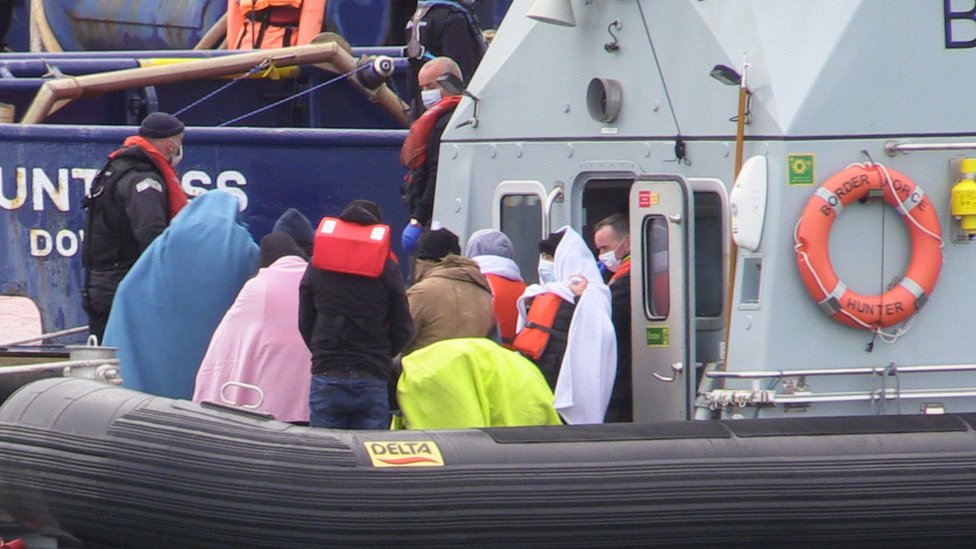 Publishedduration3 hours agoimage copyrightPA Newsimage captionVessels carrying migrants were intercepted by Border Force and brought to DoverUp to 170 migrants in 12 boats have crossed the English Channel after days of choppy sea conditions improved.A further 222 people were stopped from making the “perilous” journey by French authorities, the Home Office said. The authorities later…

Up to 170 migrants in 12 boats have crossed the English Channel after days of choppy sea conditions improved.

A further 222 people were stopped from making the “perilous” journey by French authorities, the Home Office said.

The authorities later confirmed the body of a man in a lifejacket, found on a beach near Calais at 08:00 BST, was that of a migrant.

Six migrants on two kayaks tied together were also rescued by the French navy off the coast of Calais.

The man, who was found dead on the beach at Sangatte, had almost certainly been trying to cross the Channel, said Pascal Marconville, the prosecutor of nearby town Boulogne-sur-Mer.

The number of people reaching the UK by boat had fallen in October amid harsher conditions in the Channel.

Mr Marconville said initial examinations of the man’s body indicated there was no third party involvement in his death.

There was also no suggestion he had been in the water for any length of time – washing up just a few hours after attempting to make the crossing.

Officers investigating his death would work with the migrant communities based in Calais and Dunkirk to try to establish his identity and the circumstances around his death, he added.

About 260 people have successfully made the crossing this month, compared to a record 1,951 in September.

Home Office minister Chris Philp said the government was “taking action at every step of these illegally-facilitated journeys to make this route unviable”.

The National Crime Agency this week arrested 12 people alleged to be responsible for smuggling migrants into the UK, he said.

A 30-year-old man was arrested in Hastings on Friday on suspicion of sourcing boats in the UK and transporting them to France, where they were allegedly used to cross the Channel.

Meanwhile, about 250 people gathered in Folkestone, Kent, to show support for asylum-seekers being housed inside a former army barracks.

It followed claims that far-right activists were using the arrival of asylum-seekers at the Napier barracks to “fuel hate”.

“There’s a narrative that has been put forward by a group of people saying that these fellow human beings aren’t wanted in Folkestone and we know that isn’t the case,” said Bridget Chapman, of charity Kent Refugee Action Network.

And Clare Moseley, co-founder of refugee charity Care4Calais, said they were only risking crossing the Channel “because they are frightened, fleeing appalling horrors in some of the most dangerous places on earth”.

“They [also] do it because of the grim and unsanitary conditions in Calais, where they are constantly harassed and abused by the authorities,” she continued.

“They do it because there is no safe and legal way to have their UK asylum claim heard.”

Kent Police thanked “the vast majority of the attendees” at the Folkestone protest at what it described as a “peaceful event”.

One man was arrested on suspicion of criminal damage following a confrontation with a small counter demonstration.