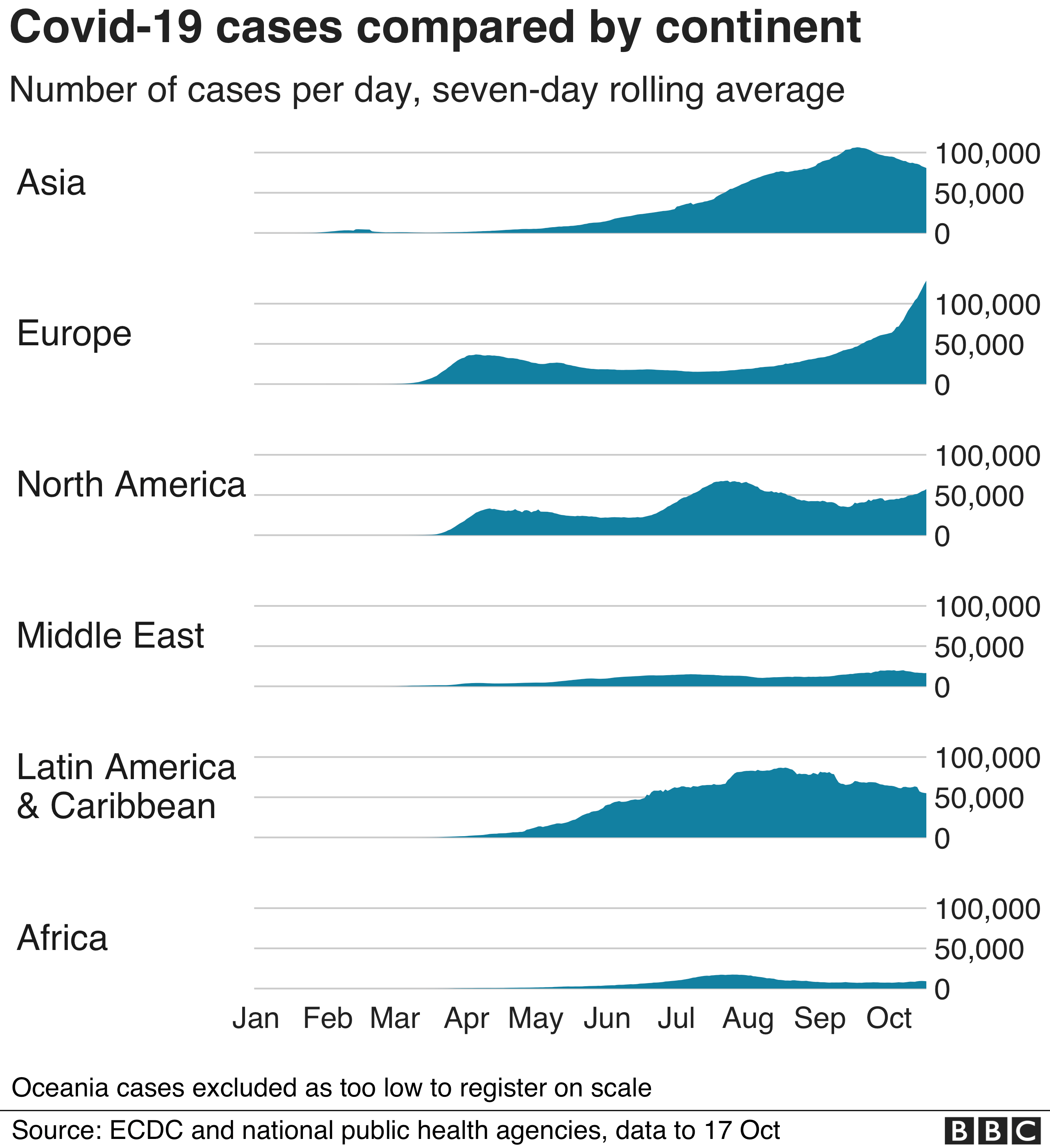 By The Visual and Data Journalism TeamBBC NewsPublishedduration39 minutes agoCoronavirus is continuing its spread across the world, with nearly 40 million confirmed cases in 189 countries and more than one million deaths.The virus is surging in many regions and some countries that had apparent success in suppressing initial outbreaks are also seeing infections rise again.In…

Coronavirus is continuing its spread across the world, with nearly 40 million confirmed cases in 189 countries and more than one million deaths.

The virus is surging in many regions and some countries that had apparent success in suppressing initial outbreaks are also seeing infections rise again.

Note: The map, table and animated bar chart in this page use a different source for figures for France and the UK from that used by Johns Hopkins University, which results in a slightly lower overall total. US figures do not include Puerto Rico, Guam or the US Virgin Islands.

Coronavirus cases have risen over the last few months in several regions of the world.

The World Health Organization (WHO) has warned the global death toll could hit two million before an effective vaccine is widely in use.

It says roughly one-in-ten people worldwide may have already been infected but that “the vast majority of the world remains at risk”.

Cases and hospital admissions are now rising fast again in many European countries.

France introduced a new 21:00 curfew on Saturday in Paris and eight other French cities to try to curb the country’s soaring infection rate.

Germany, Italy, Portugal and the UK have all recently recorded their highest number of infections since the start of the pandemic.

These latest increases are concerning because many countries felt they had brought infections under control in the summer.

However, experts had predicted a second wave of infections in the autumn.

Lockdowns and other restrictions have been brought back in the worst-affected regions, and there have been fresh appeals for people to wear face coverings and follow social distancing rules.

The pattern of rising infections following the loosening of lockdown restrictions is not limited to Europe, though.

Israel imposed a new national lockdown after recording record numbers of daily cases in late September, which is expected to be lifted only gradually towards the end of October.

Peru has recently reopened its borders for the first time in seven months. Other countries that have seen a resurgence of the virus include Canada and Russia.

In Latin America, Brazil has now passed five million confirmed cases, although the number of daily new infections is thought to be slowing.

In Argentina, cases have been rising quickly – the country now has nearly one million infections.

Cases are also continuing to rise in Indonesia. The country has recorded more than 12,000 deaths – the highest number in South East Asia.

In the Middle East, cases in Iraq have been rising steadily since June, with the country having recorded more than 400,000 cases in total. However, there are signs cases may now be levelling off.

India has driven the increase in numbers in Asia, with more than seven million confirmed infections, the second-highest official total in the world after the US.

The country has, however, maintained a relatively low death rate, given the size of its population, and there are signs that both cases and deaths may now have begun to decline.

Africa has recorded more than 1.5 million confirmed cases, although the true extent of the pandemic there is not known as testing rates are low.

South Africa, with some 700,000 cases and 18,000 deaths, is still the worst affected country on the continent. Morocco and Egypt are the only other African countries to officially record more than 100,000 cases.

US has world’s highest death toll

The US has recorded nearly 220,000 deaths from coronavirus – the world’s highest official death toll.

It has more than eight million confirmed cases and the handling of the pandemic has become a central talking point in the presidential election campaigns.

The number of daily cases had slowed in recent weeks but is now rising again, driven mostly by renewed outbreaks in the Midwest.

Damage to the world’s major economies is four times worse than the 2009 global financial crisis, according to the Organization for Economic Cooperation and Development (OECD).

Meanwhile, the United Nations has said that up to 265 million people could face starvation by the end of the year because of the impact of Covid-19.