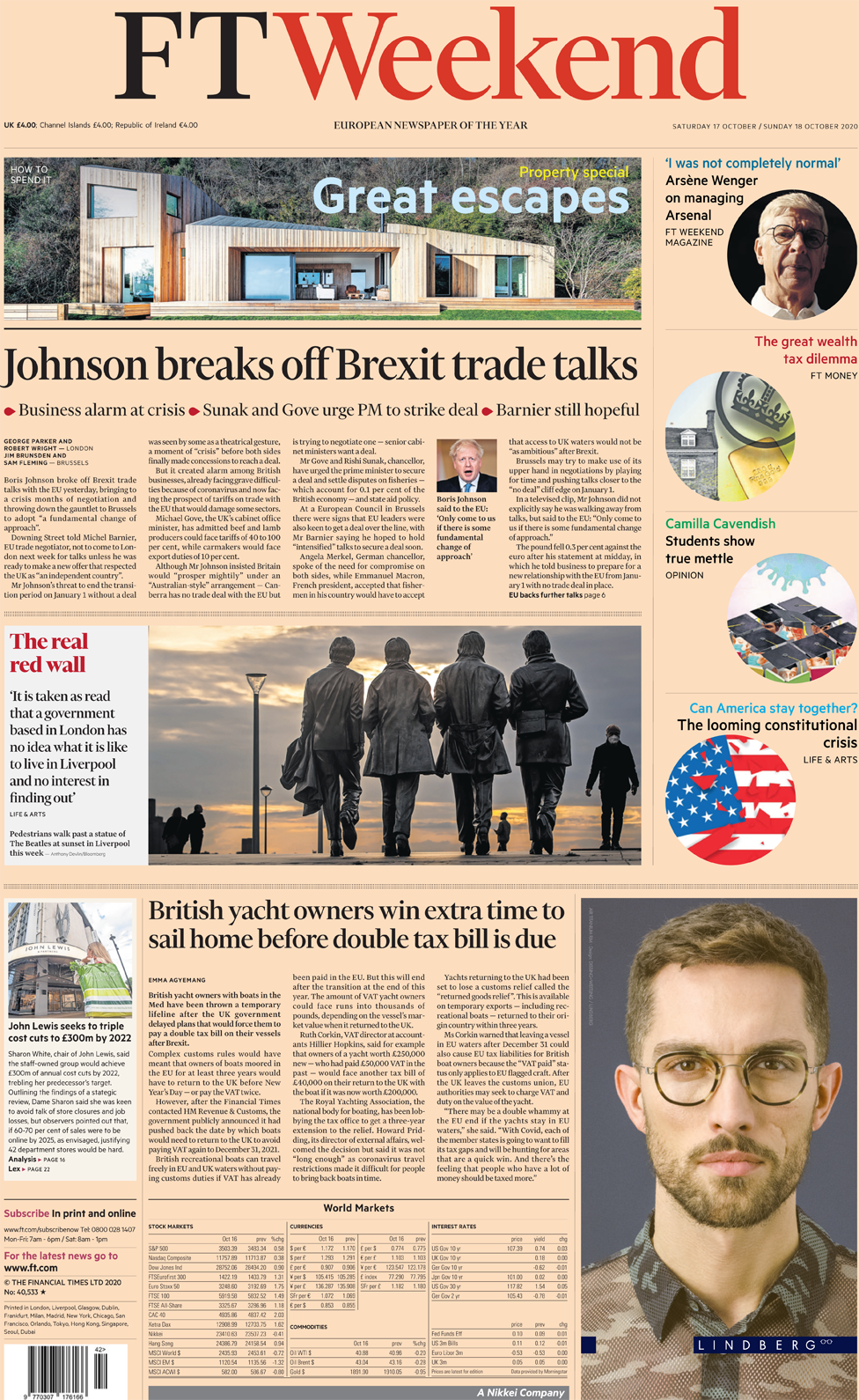 By BBC NewsStaffPublishedduration46 minutes agoimage captionSome of Saturday’s papers lead with growing tensions between Westminster and regional governments over coronavirus restrictions. The Guardian says Boris Johnson has attempted to “strongarm” leaders in Greater Manchester into accepting restrictions without providing additional money to businesses. It comes after the PM held a Downing Street press conference during…

It sees Boris Johnson’s claim that every day of delay means “more people will die” as an attempt to “strongarm” Greater Manchester into accepting tougher restrictions without providing extra money.

The paper says the PM’s rejection of a short national “circuit breaker” lockdown, appears to be at odds with the views of his chief scientific adviser, Sir Patrick Vallance, who’d confirmed government experts had pressed for such a move.

The main cartoon in the Daily Telegraph sums up Mr Johnson’s dilemma: a first image shows the PM bound in chains and padlocks “weighed down by local restrictions and struggling to keep track of local lockdowns”.

A second image shows another way: the PM freed of his shackles and imposing one massive padlock on everyone else. The caption reads: “Consolidate into one easy to manage national lockdown: set yourself free, lock everyone else up.”

Online, the Independent sums up the Brexit and pandemic crises as “no deal one” and “no deal two”.

It says Mr Johnson was fighting on two fronts as he refused to back down to leaders in the North West of England over bringing in a tier three restrictions and to the EU over Brexit.

The Daily Express salutes the PM in its leader column: “Boris is right on Brexit Britain’s bright future.”

It suggests Brussels has been given a wake up call that it can’t continue to punish and browbeat a country which had the audacity to quit the toxic club.

Former chancellor George Osborne is being lined up as the next chairman of the BBC according to the Daily Telegraph.

The paper says it can disclose that Mr Osborne is being urged to stand for the position by senior figures – after the government raised the salary for the part-time role to £160,000 a year.

It says Mr Johnson’s understood to be keen to appoint a Tory – but Mr Osborne has declined to comment on the speculation.

In the Daily Mail’s exclusive interview, the American businesswoman, Jennifer Arcuri, says she had a four-year affair with Mr Johnson after being “swept away” by what she calls his “avalanches” of reckless, blind passion.

She denies any suggestion she profited from the relationship and an investigation by the Independent Office for Police Conduct found no evidence that Mr Johnson had influenced payments of public money or access to trade missions. He has denied any wrongdoing.

“Bring dog walkers to heel” is the headline on a report in the Times about fresh calls to regulate the dog-walking industry.

The RSPCA wants a national licensing system for commercial walkers and a limit of no more than four animals each.

The City of London Corporation, which manages Hampstead Heath, is also calling for the change, after complaints about walkers with more than ten dogs.

The paper says there were nearly 350 dog related incidents in the last two years – with six going to court.