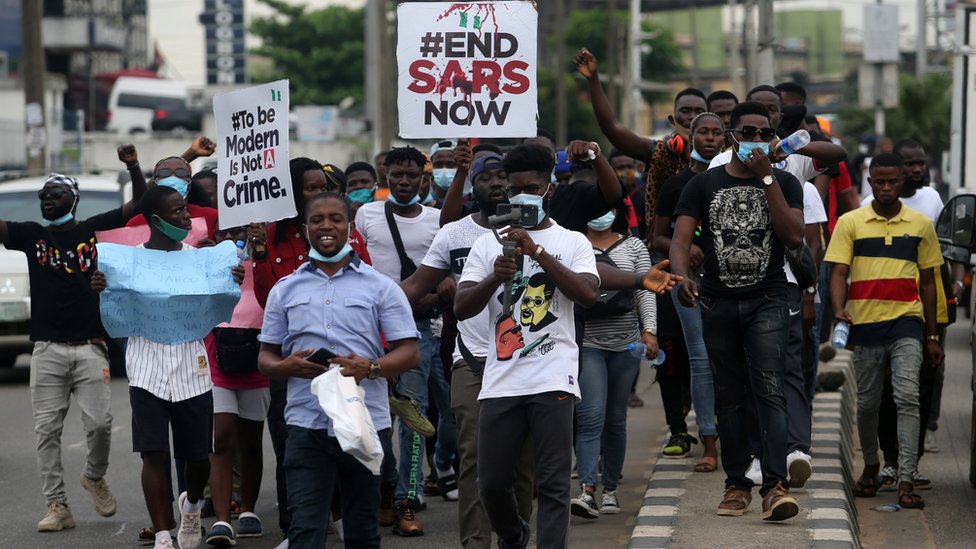 Publishedduration2 hours agoNigerians have been protesting for years against police brutality, so why did this October’s protests gain international attention and support at a scale never seen before?Over the last two weeks, an outpouring of support for Nigerian protesters has played out on Twitter, with various hashtags, but predominantly #EndSARS.Sars stands for the Special Anti-Robbery…

Nigerians have been protesting for years against police brutality, so why did this October’s protests gain international attention and support at a scale never seen before?

Over the last two weeks, an outpouring of support for Nigerian protesters has played out on Twitter, with various hashtags, but predominantly #EndSARS.

Accusations of Sars officers robbing, attacking and even killing people go back years but a new wave of protest started at the beginning of October.

A tweet by someone with just 800 followers received more than 10,000 retweets:

SARS just shot a young boy dead at Ughelli, Delta state as we speak. In front of Wetland hotels. They left him for dead on the road side and drove away with the deceased Lexus jeep.

The Tweeter, who calls himself Chinyelugo, told the BBC that he normally keeps a low profile on Twitter but that he personally had been harassed by the police previously so when a friend told him about what appeared to be another attack by police he felt the need to tweet it.

“If Sars see you as a young person who is successful with a nice car, they will harass you and extort money from you,” he explained.

He later tweeted video of what he said was the young man shot by police.

Her posts are normally a mixture of posing in fishnet tights and promoting body scrubs.

It’s possible that this video had already passed from the person who filmed it, through many different people, and WhatsApp groups before it reached Azakaza Sarah.

A few people who the Nigerian press described as social media influencers, and later described themselves as “accidental leaders” took up the cause.

The BBC’s Nduka Orjinmo says the real energy was injected on Wednesday 7 February, four days after the tweet about the man being shot, when Rinu Oduala, a woman who describes herself as a media strategist, persuaded other protesters to spend the night outside government house in Lagos.

In the early days of the protests BBC Nigeria correspondent Mayeni Jones observed an interesting digital protest which could explain why this protest got so much more attention than previously.

The organisers appeared to be attempting to shame brands and journalists by tagging their twitter handles in tweets and asking them why they weren’t covering the protests.

Here’s one directed at broadcaster DSTV.

Excuse me @DStvNg @DStv there is a nationwide protest going on against police and SARS brutality, and their primary targets are young innocent Nigerians who happen to make up a high part of your viewers,don’t you think adding your voice to it will make sense? #EndSARS #EndSarsNow

Other tweeters piled in by cutting and pasting the text of the tweet and tweeting it on their own accounts.

It was like a “swarm of shame,” our correspondent says.

It was very effective – within a day it was trending and more people were talking about it, she says.

On Friday 9 October Dípò Awójídé, who describes himself on Twitter as a senior lecturer in strategy, strategically tweeted Nigerian-British boxer Antony Joshua and Star Wars actor John Boyega asking them to tweet about it.

In his request, he equated the protests to the Black Lives Matter protests earlier in the year.

A little over an hour later, Boyega obliged.

Three years ago Nigeria’s police chief re-organised SARS after public condemnation about the violence that came with their operations. That change has done nothing for Nigerians and today many are still in danger. #EndSarsProtests

The hugely popular Nigerian musicians Davido and Wizkid had also been bombarded with messages about the protests and they followed closely after Boyega in tweeting their support for the protesters.

By the end of that day the #EndSars hashtag was trending worldwide.

Over the weekend celebrities who had no tie to Nigeria, like German/Turkish Arsenal player Mesut Özil, also tweeted their support.

Horrible to hear what’s been going on in Nigeria. Let’s make this a trending topic everywhere ▶️ #EndSARS – My thoughts go out to everyone who has been affected. 🇳🇬💚 #EndPoliceBrutality

The discussion on Twitter reached a peak of 661,340 tweets on Sunday 11 October.

By the middle of the next week, the CEO of Twitter himself, Jack Dorsey, tweeted, asking for donations to the protesters.

Two days later, he tweeted a new Twitter emoji, showing a raised fist in the colours of the Nigerian flag, designed especially for the protests.

As of Friday 16 October, there were nearly 3.3 million tweets with 744,000 retweets of posts containing the #EndSARS hashtag.