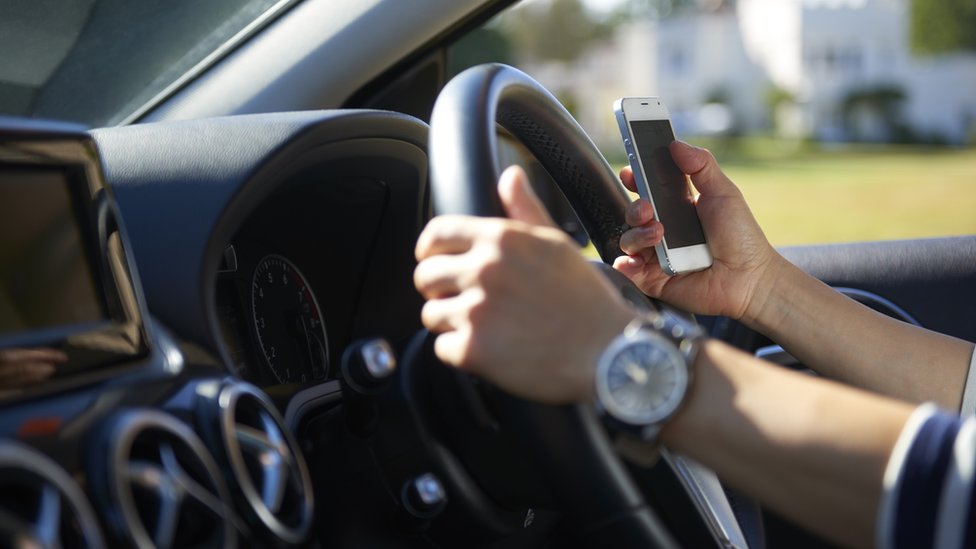 Publishedduration5 hours agoimage copyrightGetty ImagesIt will become illegal for anyone to pick up and use their mobile phone while driving, under new legislation to be enacted next year.The Department for Transport wants to update laws so that phone calls and texts are not the only things banned for drivers using their device.Mobiles could still be…

It will become illegal for anyone to pick up and use their mobile phone while driving, under new legislation to be enacted next year.

The Department for Transport wants to update laws so that phone calls and texts are not the only things banned for drivers using their device.

Mobiles could still be used for payment when the vehicle is stationary, such as at a drive-through takeaway.

And drivers would still be able to use devices hands-free under the plans.

Ministers rejected calls to ban the use of hands-free function, for example using a sat-nav in a phone cradle, as part of the consultation.

Roads minister Baroness Vere said of hand-held phone use behind the wheel: “It’s distracting and dangerous, and for too long risky drivers have been able to escape punishment, but this update will mean those doing the wrong thing will face the full force of the law.”

The change in law would apply across Britain and is expected to come into effect early next year, depending on the outcome of the consultation.

“Police will take robust action against those using a hand-held mobile phone illegally and proposals to make the law clearer are welcome.”

The punishment for drivers caught breaking the rules on hand-held mobile use is six penalty points and a £200 fine.

Phones behind the wheel: the law

In 2019, there were 637 casualties on Britain’s roads – including 18 deaths and 135 serious injuries – in crashes where a driver using a mobile was a contributory factor.

But drivers have successfully argued that filming or taking photos while driving does not match the wording in the current legislation – which says it is illegal to use a device “which performs an interactive communication” while driving.

In 2019 Ramsey Barreto was found guilty of using his phone to film a crash in north London two years ago. However, the 51-year-old then successfully appealed against the conviction.

The ruling led two High Court judges to criticise the 16-year-old law on using mobile phones, which they said had failed to evolve with the rise of smartphones.

RAC head of roads policy Nicholas Lyes said: “The closing of this loophole is very welcome and reflects the multitude of ways drivers can use hand-held phones when behind the wheel in 2020.

“We know that the use of hand-held mobile phones at the wheel continues to represent a very real road safety risk, so it’s clear more needs to be done to make this as socially unacceptable as drink-driving.”