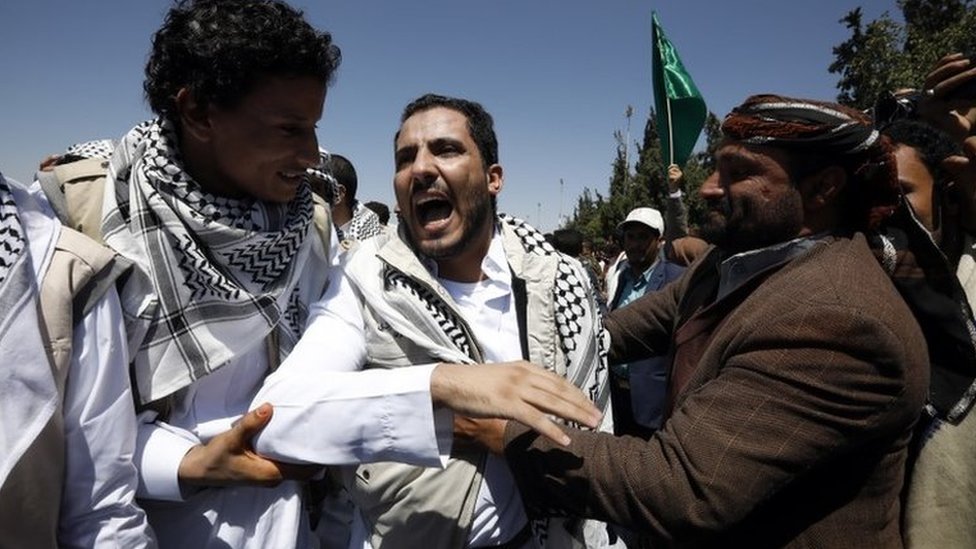 Publishedduration1 hour agoimage copyrightEPAimage captionFreed Houthi rebels were welcomed on arrival at Sanaa’s airportHundreds of prisoners have been freed in the biggest such exchange between the warring sides in Yemen since the conflict there began in 2015.Some 680 Houthi rebels and 400 pro-government fighters were flown between the capital Sanaa and the second city of…

Hundreds of prisoners have been freed in the biggest such exchange between the warring sides in Yemen since the conflict there began in 2015.

Some 680 Houthi rebels and 400 pro-government fighters were flown between the capital Sanaa and the second city of Aden on Thursday and Friday.

The swap was agreed at UN-supervised talks in Switzerland last month.

On Wednesday, the Houthis freed two US hostages and 200 of their supporters were allowed to return from Oman.

Yemen has been devastated by a conflict that escalated in 2015, when the rebels seized control of much of the west of the country and a Saudi-led coalition of Arab states launched a military operation to restore President Abdrabbuh Mansour Hadi’s rule.

The fighting has also reportedly left more than 110,000 people dead; triggered the world’s worst humanitarian disaster, with millions on the brink of famine; and left the country even more vulnerable to the Covid-19 pandemic.

The International Committee of the Red Cross (ICRC), which oversaw the prisoner exchange, said 352 people had been released on Friday, after more than 700 on Thursday.

Planes transported pro-government fighters to Aden, the temporary seat of Mr Hadi’s government, and Houthis to Sanaa, the rebel-held capital, where they were welcomed by cheering crowds and a brass band.

The ICRC conducted one-on-one interviews and medical checks with the freed prisoners to be sure they wanted to be transported home and were healthy enough to do so, it said.

They were also provided with clothes, money for transportation, and personal protection equipment to protect against the transmission of Covid-19.

“This operation that means so much to so many families is under way.”

Over 1,000 former detainees are being released in #Yemen.

It’s the largest release operation during wartime in which we’ve been involved since the Korean conflict. pic.twitter.com/vb8UEEW0Yb

The UN special envoy to Yemen, Martin Griffiths, told the Security Council on Thursday that the operation was an “airlift of hope”.

“This will bring immense relief and comfort to all those families who waited so long to be reunited as well as to other families, close relations, friends and members of their communities,” he said.

But Mr Griffiths noted that there remained many thousands more conflict-related prisoners and urged the warring parties to meet very soon to discuss further releases in line with the commitment they made at UN-brokered peace talks in Sweden in 2018.

The Stockholm Agreement should have resulted in 15,000 prisoners being exchanged within a month.

Houthi spokesman Mohammed Abdul Salam said the exchange brought “back hopes of building peace”, while Information Minister Moammar al-Eryani tweeted that the Saudi-backed government was committed to continue working to secure the release of all the rebels’ detainees.

Mr Eryani said five journalists were among those freed by the Houthis, and alleged that they had undergone “heinous psychological and physical torture”. He also warned the rebels that they would be held responsible for the safety of four other journalists who have been sentenced to death.