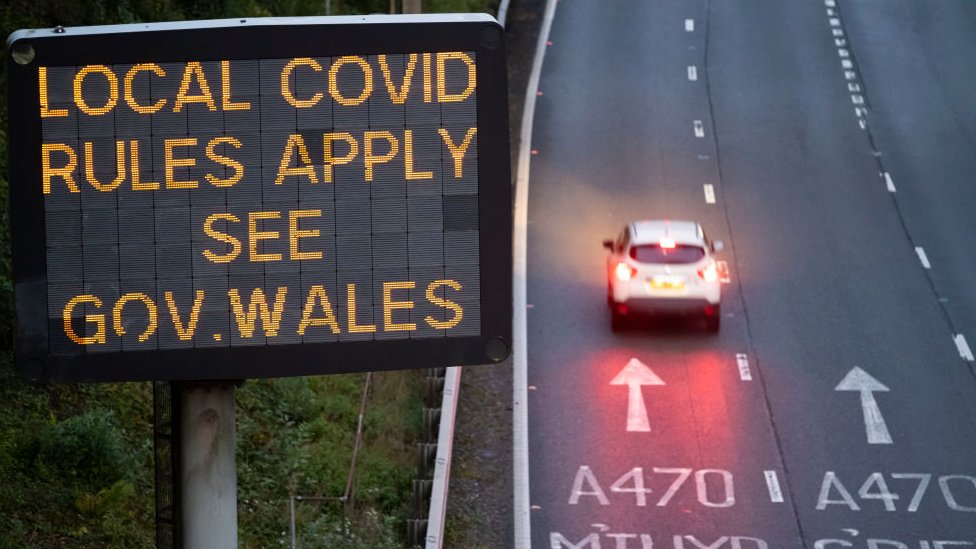 A ban on people travelling to Wales from coronavirus hotspots elsewhere in the UK has come into effect.

The ban covers all of Northern Ireland, England’s tier two and three areas and the Scottish central belt.

But the move has been backed by Scotland’s First Minister Nicola Sturgeon.

The new rules mean anyone coming from places in the UK with extra restrictions is now banned from entering the country.

People living in parts of England and Scotland without extra restrictions can still travel to areas of Wales which are not under local lockdowns, including Powys, Pembrokeshire and Gwynedd (apart from Bangor).

Currently, 17 areas of Wales, including 15 of its 22 counties, as well as the city of Bangor and town of Llanelli, are currently under local lockdowns.

Movement in and out of these counties without a reasonable excuse was already banned.

Can I travel to Wales?

Under the new rules, exceptions to the travel ban include:

Rules could be ‘unenforceable’

Announcing the ban, Mr Drakeford said: “Evidence from public health professionals suggests coronavirus is moving from east to west across the UK and across Wales.

“As a general rule, it is concentrating in urban areas and then spreading to more sparsely populated areas as a result of people travelling.”

Mr Drakeford said the law will be “essentially designed to prevent people going to those holiday parts of Wales, the far west and the far southwest of Wales, where the virus is still in very low circulation”.

Speaking on behalf of the four Welsh police forces, North Wales Police said officers would be “proactive” in targeting those not sticking to rules on gatherings.

But the head of the Police Federation in Wales warned that the rules could be “unenforceable”.

Can I be fined?

The Welsh Government said police will explain regulations to anyone caught breaking the rules before issuing a fixed penalty notice, but will issue a fine of £60, which will be halved if paid within 14 days.

Alun Michael, the police and crime commissioner for South Wales Police, said officers would ask the public to “use common sense”.

“It obviously makes no sense for people who are in high infection areas to travel into Wales into lower infection areas,” he told BBC Radio Wales Breakfast on Friday.

“It’s very clear we’ve got a very challenging period coming up and obeying the rules is absolutely crucial. This is a public health emergency.”

Responding to the ban, the UK government said: “It is clear that this virus does not respect geography and any new local spikes need all levels of government to work together.

“We’ve been working closely with the devolved administrations to support communities and businesses and it is disappointing that they have chosen to act unilaterally rather than collaborating with other parts of the UK.

“It is important that people follow their devolved administration’s local guidance.

“From the outset, our guidance has also been very clear that people from very high prevalence areas should avoid travelling in or out of that area.”