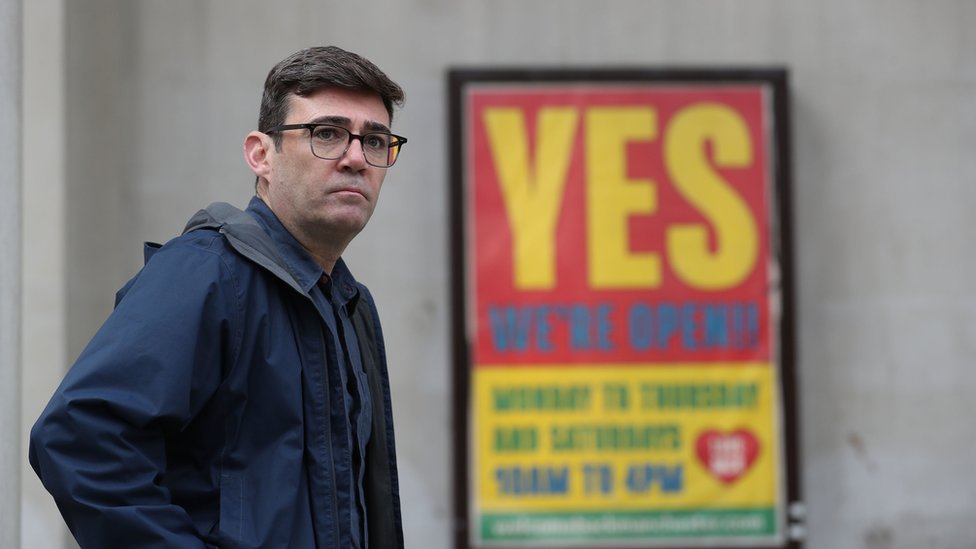 Publishedduration1 hour agoimage copyrightPA Mediaimage captionAndy Burnham says northern England has been treated with contemptGreater Manchester’s mayor should “do the right thing by the people” and agree to the highest level of Covid measures, Dominic Raab has said. The foreign secretary said Labour’s Andy Burnham was “effectively trying to hold the government over a barrel…

Greater Manchester’s mayor should “do the right thing by the people” and agree to the highest level of Covid measures, Dominic Raab has said.

The foreign secretary said Labour’s Andy Burnham was “effectively trying to hold the government over a barrel over money and politics”.

Discussions between central government and local leaders over putting the region into Tier 3 have stalled.

The leader of Manchester City Council, Sir Richard Lees, said no talks were planned for Friday.

It comes as a scientist advising the government, Dr Jeremy Farrar, warned that the row over England’s three-tier coronavirus restrictions was “very damaging to public health”.

On Thursday, Mr Burnham said Greater Manchester would “stand firm” against plans to move it into Tier 3, calling it a “flawed” and “unfair” policy.

He said the government was “asking us to gamble our residents’ jobs, homes and businesses and a large chunk of our economy on a strategy that their own experts tell them might not work”.

Under Tier 3 – the “very high” alert level – measures include pub closures and a ban on household mixing indoors, in private gardens and in most outdoor venues.

Mr Raab told BBC Breakfast: “Ultimately we need to take action – we can’t have a situation as we have seen in Manchester where Andy Burnham is effectively trying to hold the government over a barrel over money and politics.”

“I would just urge Andy Burnham to do the right thing by the people of Manchester,” he said.

Mr Raab said, but the government would “hold in reserve the ability” to impose stricter restrictions, adding that the “right response” was for Mr Burnham to “recognise that the financial package is generous”.

“If Manchester and, if Andy Burnham, are just pulling up the drawbridge and just saying ‘we’re not going to proceed unless more money is coming in’, I don’t think that’s an appropriate way to proceed,” Mr Raab said.

“We can’t have a situation where Andy Burnham is effectively saying unless you give us what we want, we’re not going to do the right thing in terms of following the new rules which will protect the very people of Manchester he’s elected to represent.”

Manchester Ciy Council leader Sir Richard told BBC Breakfast that “at the moment there are no meetings in the diary between us and government”, adding that “we are in a bit of a vacuum”.

So far the only area in the top tier is the Liverpool City Region, but Mr Raab said talks were “ongoing” with leaders in Lancashire about also putting that area under the same restrictions.

This means more than half of England’s population will now be living under high or very high alert restrictions.

However, he said local leaders must “lean in” and back the system to ensure it functions as “effectively and swiftly as possible”.

His comments come after Dr Farrar, who sits on the Scientific Advisory Group for Emergencies (Sage), warned making it a north-south or party political issue was “a very dangerous route”.

He also said that negotiations with individual areas delayed the ability to respond to the virus, and he was more in favour of national restrictions.

A modern browser with JavaScript and a stable internet connection is required to view this interactive.

Meanwhile, the Wales government is likely to introduce a two-week national lockdown, according to a union chief and a leader of Wales’ largest council.

Welsh government officials – including the first minister – have been meeting local authorities and key stakeholders over a potential “circuit-breaker” – a short, limited lockdown.

It comes as a ban on travelling to Wales from coronavirus hotspots elsewhere in the UK comes into effect on Friday evening.

In Northern Ireland, pubs, restaurants and cafes will only be allowed to offer takeaway and delivery services for four weeks from 18:00 BST on Friday.

Tighter rules around face coverings have come into effect in Scotland, making them mandatory in workplace setting such as canteens.

On Thursday, a further 18,980 cases and 138 deaths within 28 days of a positive test were reported across the UK.