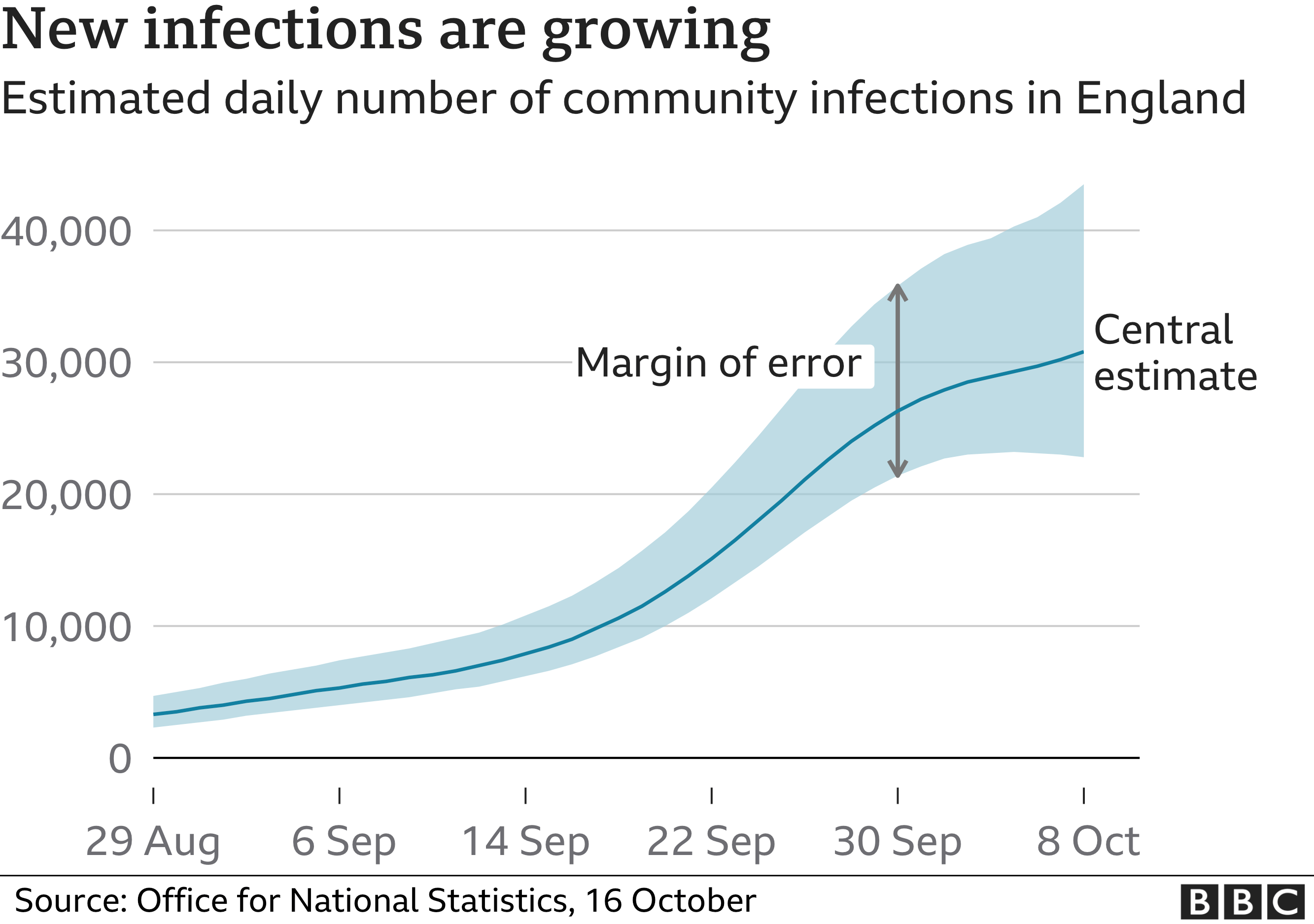 Publishedduration2 hours agoimage copyrightGetty ImagesCoronavirus infections are continuing to rise rapidly, with an estimated 27,900 new cases a day in England, the Office for National Statistics says.The R number has risen slightly to 1.3-1.5, with growth of the epidemic still widespread across the country.It comes as the highest level of restrictions are introduced in more…

Coronavirus infections are continuing to rise rapidly, with an estimated 27,900 new cases a day in England, the Office for National Statistics says.

The R number has risen slightly to 1.3-1.5, with growth of the epidemic still widespread across the country.

It comes as the highest level of restrictions are introduced in more of the UK.

Sir Patrick Vallance, the government’s chief scientific adviser, said ‘R’ was not growing as fast as it would be without the measures people were following.

But he said “we are not where we need to be”, adding there was “more work to do”.

The increase in people testing positive in recent weeks is being driven by high rates in older teenagers and young adults, the ONS infection survey says.

It found steep increases in infection rates in the north west, the north east, Yorkshire and the Humber.

New cases of the virus have gone up by 60% in a week, according to the ONS, based on its survey of people in random households with or without symptoms.

It estimates that one in 160 people in England had the virus in the week to 8 October – an increase on one in 240 the previous week.

For the same week, the ONS estimates one in 390 people had the virus in Wales and one in 250 in Northern Ireland – both an increase on the week before.

The ONS survey doesn’t cover Scotland. As confirmed cases and hospital admissions rise there, First Minister Nicola Sturgeon says Scotland is in a “precarious” position in its fight to contain Covid-19.

An app which tracks the Covid symptoms of four million users estimates there are more than 27,000 new cases per day in the UK.

Its latest figures, for the two weeks to 11 October, found the fastest acceleration of cases in the north west, while Scotland, Wales, London and the Midlands were also increasing, but more slowly.

Prof Tim Spector from King’s College London, who founded the Covid Symptom study app, said there was no longer the “exponential increases” of a couple of weeks ago – but the data still shows “new cases continuing to rise”.

Other estimates, from a large study by Imperial College London and a group of scientists advising government, suggest new cases could be even higher – up to 74,000 a day.

A different measures of cases – the number of people with symptoms to test positive for coronavirus – rose by 15,650 on Friday, the lowest for four days.

The R number is the average number of people infected by each person testing positive for the virus. An R number above 1 means the epidemic is growing.

At the peak of the epidemic back in April, the R number is thought to have been around 3.

From May up until mid-August after the national lockdown, it stayed below 1, but has been rising steadily since. All the restrictions in place around the UK are now an attempt to reduce transmission of the virus between people and get it back to below 1.

How have you been affected by the issues relating to coronavirus? Share your experiences by emailing haveyoursay@bbc.co.uk.