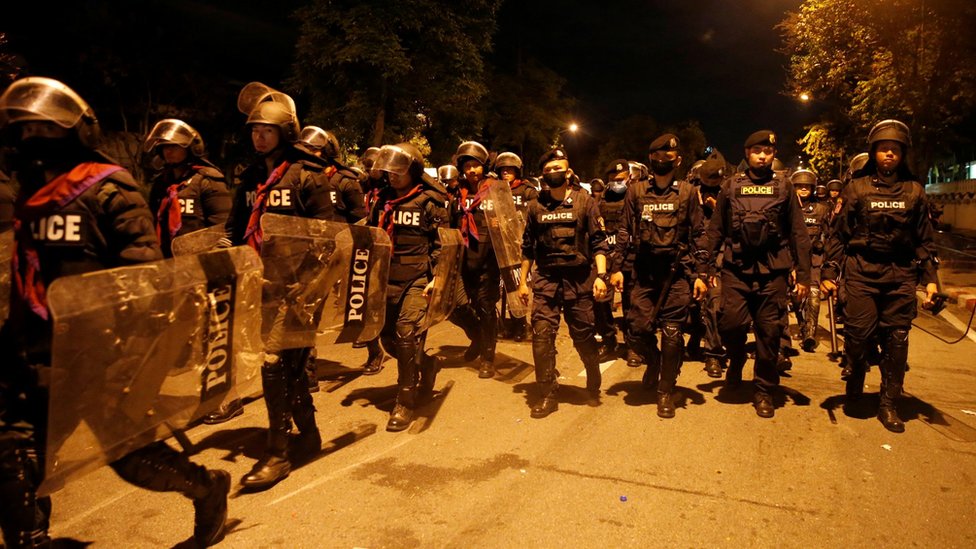 Publishedduration18 minutes agoimage copyrightReutersimage captionSecurity forces have been deployed to disperse protestersThailand’s government has announced an emergency decree to combat protests in Bangkok, which includes banning gatherings of more than four people. A televised announcement read out by police said “many groups of people have invited, incited and carried out unlawful public gatherings in Bangkok”.It…

Thailand’s government has announced an emergency decree to combat protests in Bangkok, which includes banning gatherings of more than four people.

A televised announcement read out by police said “many groups of people have invited, incited and carried out unlawful public gatherings in Bangkok”.

It said urgent measures were needed to “maintain peace and order”.

Protesters have called for curbs on the king’s powers and for the resignation of Prime Minister Prayuth Chan-ocha.

They have set up camp near the prime minister’s office and confronted a motorcade carrying King Maha Vajiralongkorn on Wednesday. The protesters, who were pushed back by ranks of police, raised the three-finger salute that has become a symbol of the protest movement.

The announcement on state television said protesters had “instigated chaos and public unrest”.

The emergency measures came into effect at 04:00 local time on Thursday (21:00 GMT on Wednesday).

In addition to limiting gatherings to four people, the decree puts restrictions on the media, prohibiting the “publication of news, other media and electronic information that contains messages that could create fear or intentionally distort information, creating misunderstanding that will affect national security or peace and order”.

Meanwhile, Thai authorities arrested two protest leaders, according to the Thai Lawyers for Human Rights group. Police have not yet commented on this.

The growing student-led protest movement, which began in July, has become the greatest challenge in years to Thailand’s ruling establishment. Protests over the weekend in the capital were some of the largest in years, with thousands defying authorities to gather and demand change.

Authorities say 18,000 people joined Saturday’s demonstration, although others gave higher figures. Many stayed to continue the protest into Sunday before dispersing.

The protesters’ calls for royal reform are particularly sensitive in Thailand, where criticism of the monarchy is punishable by long prison sentences.

Why are there protests?

Thailand has a long history of political unrest and protest, but a new wave began in February after a court ordered a fledgling pro-democracy opposition party to dissolve.

The Future Forward Party (FFP) had proved particularly popular with young, first-time voters and garnered the third-largest share of parliamentary seats in the March 2019 election, which was won by the incumbent military leadership.

Protests were re-energised in June when prominent pro-democracy activist Wanchalearm Satsaksit went missing in Cambodia, where he had been in exile since the 2014 military coup.

His whereabouts remain unknown and protesters accuse the Thai state of orchestrating his kidnapping – something the police and government have denied. Since July there have been regular student-led street protests.

Demonstrators have demanded that the government headed by Prime Minister Prayuth, a former army chief who seized power in the coup, be dissolved; that the constitution be rewritten; that the authorities stop harassing critics.

What happened with the king’s motorcade?

The king, who spends most of his time abroad but has returned from Germany for several weeks, travelled in a car alongside Queen Suthida through a crowd of peaceful protesters, who chanted and raised their hands in the three-finger salute. The gesture is thought to have been inspired by the Hunger Games films in which it is used as a symbol of unity and defiance.

The royal couple were on their way to a Buddhist ceremony on Ratchadamnoen Avenue, where demonstrations had taken place earlier in the day, before the protesters moved on towards Government House. The protesters had vowed not to block the royal motorcade’s passage and they did not.

Supporters of the monarchy, dressed in t-shirts in royal yellow colour, staged rival protests in the capital, with some filmed violently attacking the pro-democracy protesters. Some witnesses accused the government of disguising police as royalist demonstrators.

The two sides gathered separately along Ratchadamnoen Avenue on Wednesday afternoon and were kept largely apart by police. The anti-government protesters linked arms and marched chanting “Prayuth, get out!” – referring to the prime minister – and “Long live the people!”

The protesters were prevented from reaching Government House by what appeared to be ranks of royalist supporters who linked arms and shouted insults at them.

“We want to show that we love the king,” 47-year-old Sirilak Kasemsawat told AFP news agency, accusing the pro-democracy movement of wanting to “overthrow” the monarchy – a charge the movement has always denied.

“We’re not asking them to be toppled, forgotten, or not to be respected,” said Dear Thatcha, a pro-democracy protester. “We’re just asking them to change with us. Our country needs to adapt to many things, and the monarchy is one of the issues that needs to be adapted as well,” she said.