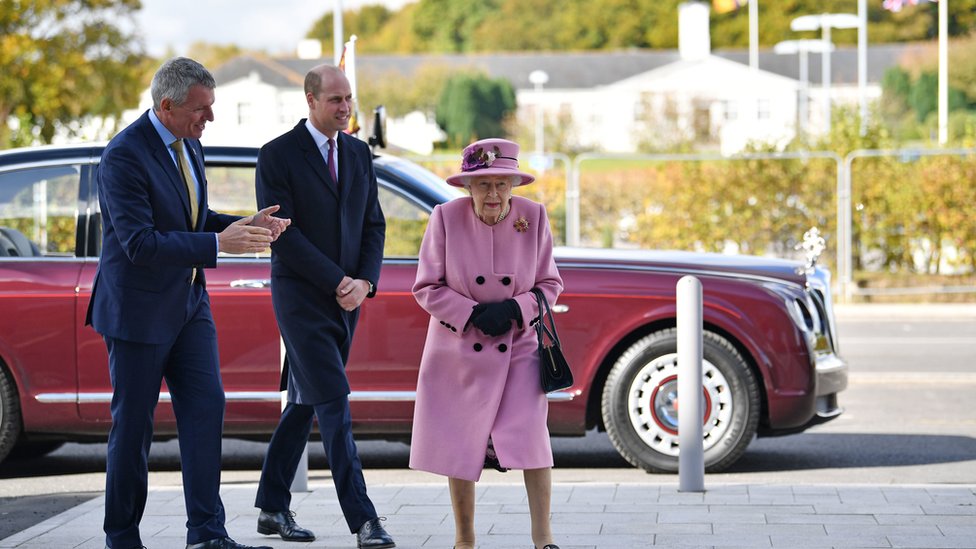 Publishedduration1 hour agomedia captionSpecial safety measures were put in place to protect the QueenThe Queen is carrying out her first public engagement outside of a royal residence in seven months. The monarch, 94, was joined by the Duke of Cambridge for the visit to Porton Down, near Salisbury, to meet scientists at the Defence Science…

The Queen is carrying out her first public engagement outside of a royal residence in seven months.

The monarch, 94, was joined by the Duke of Cambridge for the visit to Porton Down, near Salisbury, to meet scientists at the Defence Science and Technology Laboratory (DSTL).

They also met staff involved in the rapid response to the Novichok poisoning attack in Salisbury in 2018.

Special safety measures were put in place to protect the Queen.

She arrived separately to her grandson William and all those due to come into close contact with the pair were tested for coronavirus ahead of the visit. Small groups of people taking part in the event were arranged two metres apart.

Neither the monarch nor William wore a face covering when they arrived and they walked two metres apart.

Kensington Palace declined to comment as to whether the duke was required to have a test in order to be able to accompany his grandmother.

A Buckingham Palace spokeswoman said: “Specific advice has been sought from the medical household and relevant parties, and all necessary precautions taken, working closely with DSTL.”

Until now, the Queen has been in royal residences with a household of reduced staff, nicknamed HMS Bubble.

She knighted Captain Sir Tom Moore in the grounds of Windsor Castle in July and had also watched a socially-distanced Trooping the Colour there for her birthday the previous month.

The Queen travelled to Balmoral for her private summer break and also spent a few weeks in Sandringham before returning to Windsor on 6 October.

Before the Porton Down visit, she had last been seen outside a royal residence on 9 March, when she joined the Royal Family at Westminster Abbey for a Commonwealth Day service.

The monarch and William were shown weaponry used in counter-intelligence during their visit to DSTL and met counter-terrorism staff.

As part of the visit, they then spoke to those involved in identifying the nerve agent used in the Novichok incident, and those who worked on the decontamination clean-up operation.

Russian intelligence has been accused of being behind the attempted assassination of former Russian spy Sergei Skripal and his daughter Yulia.

Months after the attack, Dawn Sturgess and her partner Charlie Rowley fell ill in nearby Amesbury. Ms Sturgess later died after coming into contact with a perfume bottle believed to be linked to the case.