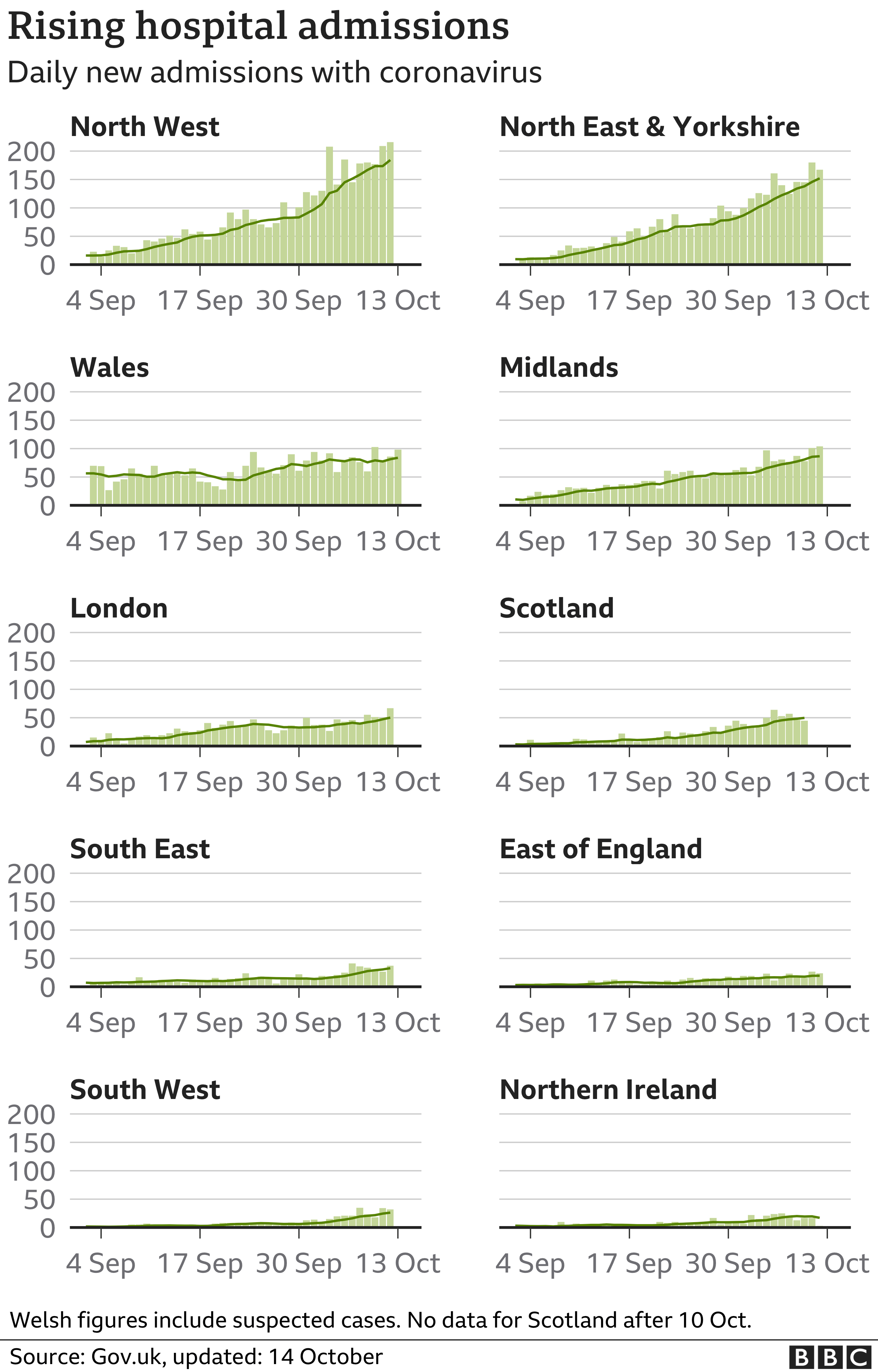 Publishedduration1 hour agoimage copyrightGetty ImagesA final decision has not yet been made on whether Greater Manchester will move into the highest level of Covid measures, local MPs have told the BBC.A financial package has not been finalised, with local leaders expressing concerns about the impact on the hospitality industry.Tier 3 involves pub closures and a…

A final decision has not yet been made on whether Greater Manchester will move into the highest level of Covid measures, local MPs have told the BBC.

A financial package has not been finalised, with local leaders expressing concerns about the impact on the hospitality industry.

Tier 3 involves pub closures and a ban on household mixing indoors, in private gardens and in most outdoor venues.

Meanwhile, other parts of England will move into Tier 2 from Saturday.

Under this “high” alert level, the regions will face restrictions on meeting indoors.

It means more than half of England’s population will be living under Tier 2 or 3 restrictions.

Talks between the government and officials in Greater Manchester and Lancashire were taking place on Thursday morning about moving to Tier 3 or the “very high” alert level.

Speaking in the House of Commons, Health Secretary Matt Hancock said discussions with local leaders in other parts of the country “in Greater Manchester, in Lancashire, and elsewhere” were ongoing – including “what financial support is needed”.

But he told MPs he wanted to see “rapid progress” on the issue, and said “we have put in place unprecedented support [for] those affected”.

He added: “Let us be under no illusions about the danger posed by this virus.

“Coronavirus is deadly and it is now spreading exponentially in the UK.”

Greater Manchester Mayor Andy Burnham has been resisting following the Liverpool City Region into Tier 3 restrictions, which he has described as unfair and a threat to jobs and businesses.

Shadow foreign secretary and Labour MP for Wigan Lisa Nandy said “despite repeated attempts to claim we’re divided” there was “total unity” from Conservative and Labour Greater Manchester MPs on a call with Downing Street officials on Thursday morning.

She tweeted: “We will support evidence based interventions with adequate financial support. We will not support this chaos.”

Oldham Council leader Sean Fielding described the meeting as a “masterclass in how not to” hold negotiations.

He said the government’s “opening line” was that Tier 3 would be implemented with local leaders or imposed, with “nothing… to bring us on side because ‘there is no money'”.

Meanwhile, Labour’s Andrew Gwynne, the MP for Denton and Reddish, tweeted that the briefing “was utterly pointless”.

“While they claim ‘no decision on Tier 3’ we know it was being heavily briefed,” he said.

“The strength of feeling was strong from Tory and Labour MPs alike. The minister needs to listen: we are a city united.”

The new three-tier system sees every area of England classed as being on medium, high or very high alert – also known as Tiers 1 to 3, respectively.

Medium alert means areas are subject to the national restrictions currently in force, including the rule of six on indoor and outdoor gatherings and the 22:00 closing time for pubs, bars and restaurants.

In addition to these restrictions, in areas on high alert – including north-east England, much of the North West and parts of the Midlands, along with West and South Yorkshire – different households are not allowed to mix indoors.

Pubs and bars will be closed unless they are serving substantial meals and there is also guidance against travelling in and out of the area.

Further restrictions may be agreed for particular regions in the top tier and in the Liverpool City Region gyms, leisure centres, betting shops and casinos have also been forced to close.

Workers at firms told to shut because of coronavirus rules over the winter will receive at least two-thirds of their pay from the government, under the Job Support Scheme announced by Chancellor Rishi Sunak.

This means the scheme – which replaces furlough at the start of November for six months – will pay those people who can’t go to work because pubs and restaurants have been closed under ”very high” Tier 3 coronavirus restrictions.

Until then, workers are in line for up to 80% of their pay – 20% from their employer and 60% from the government – if their premises must close, or if there isn’t enough for them to do.

In a meeting on Wednesday, health officials from the Joint Biosecurity Centre (JBC) suggested that Greater Manchester along with much of north-east and north-west England and parts of Yorkshire and the Midlands should be moved into the top tier.

Meanwhile, schools in Northern Ireland will close from Monday and pubs and restaurants face new restrictions from Friday.

Wales is preparing to ban people from parts of the UK that have high rates of coronavirus from travelling to the country from 18:00 BST on Friday.

And in Scotland, First Minister Nicola Sturgeon has advised Scots against travelling to high risk areas of England, singling out Blackpool as being linked to “a large and growing number” of Covid-19 cases in her country.

On Wednesday, a further 19,724 coronavirus cases were recorded in the UK, while 137 more people have died within 28 days of testing positive for the virus.

How will the new measures affect you? Do you have any questions about the restrictions? Share your experiences by emailing haveyoursay@bbc.co.uk.