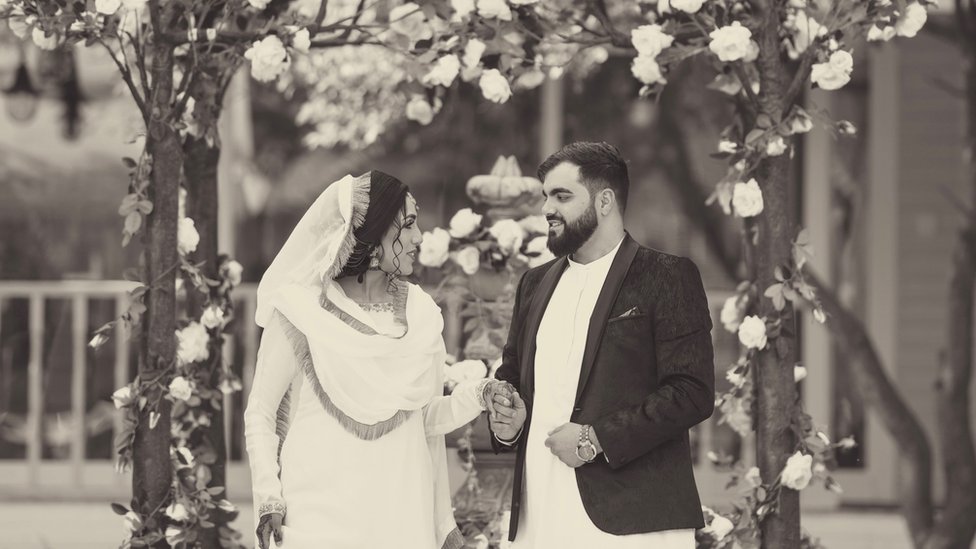 Publishedduration55 minutes agoimage copyrightAlisha Rehmanimage captionAlisha Rehman married her husband in a small ceremony earlier this yearA bride whose dream wedding plans were derailed by Covid-19 has said she is being denied her £16,000 deposit.Alisha Rehman, 25, from Birmingham, was due to get married at Excellency Midlands’ venue in Telford in July in a 500-person…

A bride whose dream wedding plans were derailed by Covid-19 has said she is being denied her £16,000 deposit.

Alisha Rehman, 25, from Birmingham, was due to get married at Excellency Midlands’ venue in Telford in July in a 500-person ceremony.

Official rules say couples affected by government restrictions have a right to refunds, but getting money back has proved difficult.

Excellency Midlands said the whole sector had been left “on hold”.

Mrs Rehman cancelled her booking when restrictions were brought in and got married in a small ceremony in her mother-in-law’s garden.

She said the pandemic meant it was not certain when a large-scale event could be held.

Excellency Midlands hit the headlines last month when police found 120 guests at a post-wedding party at its venue.

Couples up and down the country have faced similar decisions to Mrs Rehman – whether or not to cancel. Official figures suggest 73,600 weddings and civil partnership ceremonies have been affected by restrictions.

“My wedding was initially booked for July, then because of the pandemic, clearly nothing can go ahead,” she said. “We’ve given them £16,000 and they are not giving us a penny back.”

According to the Competitions and Markets Authority, refunds should be given for weddings that could not take place as planned due to coronavirus.

Mrs Rehman and her husband drove to Telford to meet the venue owners to discuss the refund, but she said nobody turned up. They scheduled another meeting and “still nothing”.

“It’s taken my whole life to save that and they’re not even giving us a penny,” Mrs Rehman said. “It stresses me out… it’s just a joke.”

She said the firm had instead offered a new date in March 2021. Despite approaches from her solicitor, she said the venue had failed to respond.

In a statement to BBC News on Thursday, Excellency Midlands said the wedding industry had been badly affected by the pandemic and the whole hospitality sector was “on hold”.

It blamed the government for a lack of “any directions, help or guidance as to how we are looking to open in the near future” which meant it was “impossible” to provide any clear information to clients.

“We completely understand the difficulty couples, hoping to get married, are in, and want to let them know that we will be supporting them fully, once the industry is back,” a spokesman said.

“As soon as the government provides a pathway to opening the industry back, we will be contacting all of our loyal customers and making sure they receive the urgent attention we know they deserve.”

The CMA said it could not comment on individual cases, but it “would expect a consumer to be offered a refund where lockdown laws prevented a wedding going ahead” as planned.