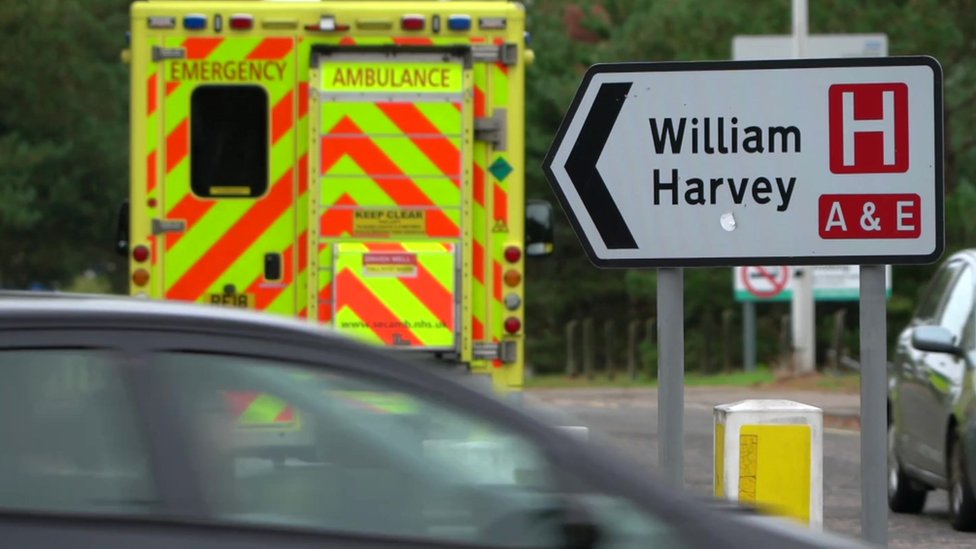 By Michael BuchananSocial affairs correspondent, BBC NewsPublishedduration1 hour agoAn elderly patient with dementia was restrained on 19 separate occasions to allow hospital staff to forcibly treat him, BBC News has learned. The man was repeatedly bruised by security guards and his requests for the restraints to be stopped ignored. One incident, at Kent’s William Harvey…

An elderly patient with dementia was restrained on 19 separate occasions to allow hospital staff to forcibly treat him, BBC News has learned.

The man was repeatedly bruised by security guards and his requests for the restraints to be stopped ignored.

One incident, at Kent’s William Harvey Hospital, saw a cloth held over his head while his arms and legs were held so nurses could insert a catheter.

The hospital apologised “unreservedly” to the patient and his family.

According to an internal investigation seen by BBC News, the man was admitted from his care home to the hospital, in Ashford, last November, with urinary retention.

The patient’s condition, the reports say, could make him confused and aggressive, occasionally shouting and hitting out at staff and refusing treatment.

But the investigation shows staff rarely tried to de-escalate the situation and repeatedly failed to sedate him effectively.

Instead, over the course of nearly three weeks at the hospital, the 77-year-old, who we are not naming at his family’s request, was physically restrained 19 times, with the hospital’s security guards assisting on 18 occasions, under orders from nursing staff on the ward.

In the first restraint, on 29 November, the guards “held down arms and legs”, causing “broken skin, redness to wrists and knees”, the investigation report says.

Between 6 and 15 December, security guards were called 15 times to control the patient, often in the middle of the night.

On another occasion, nursing staff managed to restrain him themselves.

The report records this as “restraint by nursing staff for catheterisation without sedation, 20 minute restraint, intermittent release”.

Security guards filmed the restraints, on their body-worn cameras, at least twice.

And it was the review of the footage of the second restraint that prompted senior management to take action.

A whistleblower who has seen the video said “it is truly appalling” as it showed “22 minutes of silence” with no-one speaking to the patient.

The staff member said the patient had been lifted from a sitting position, thrown on to a bed and had his arms and legs restrained by two security guards and four carers, a mix of healthcare assistants and nurses.

The patient had been struggling and repeatedly asking staff to stop.

At one point, he had spat out and a carer had responded by putting a cloth over his head.

The aim of the restraint was to insert a catheter.

On occasion, some members of staff had realised what had been happening had been wrong, the investigators found.

On 9 December, a security guard raised concerns about being asked to restrain the man.

“The security guard spoke to the patient about the procedure,” the report says.

“And the patient said he did not want this.

“The security guard… felt uncomfortable about continuing and told the nurses he would stop the restraint.”

Later that same day, during another restraint, a supervisor “threatened to stop assisting, as he felt we were denying human rights”.

But he was told there was a “clinical need and [it was in the] best interest of patient”.

A separate incident report, paints a damning picture of the Cambridge J ward, where the man was a patient, describing it “chaotic” with a “poor” reputation that had affected staff recruitment and retention.

It was often understaffed and “unsafe on most shifts,” this report says.

Medicines “would be left on lockers or tables”, so staff did not know whether patients had taken them.

And the “fundamental and basic nutritional needs of the patients were not always met”.

Three days after the final restraint, the patient was moved to another hospital, the Kent and Canterbury.

He is now well and settled in a different care home.

An investigation by Kent Police into the patient’s care has ended without any charges.

The company that supplies the hospital’s security guards, RightGuard, told BBC News: “We did nothing wrong.

“Security staff will only ever act under the instructions of clinicians.”

“He was just seen as someone with dementia.

“And his wishes were totally ignored.”

In a statement, East Kent Hospitals Trust said: “We apologise unreservedly to the patient and his family for the failings in his care.

“This fell far short of what patients should expect.

“We are rolling out a programme of dementia training for every member of staff, which more than half of staff have completed.

“One member of staff has been referred to the Nursing and Midwifery Council.”