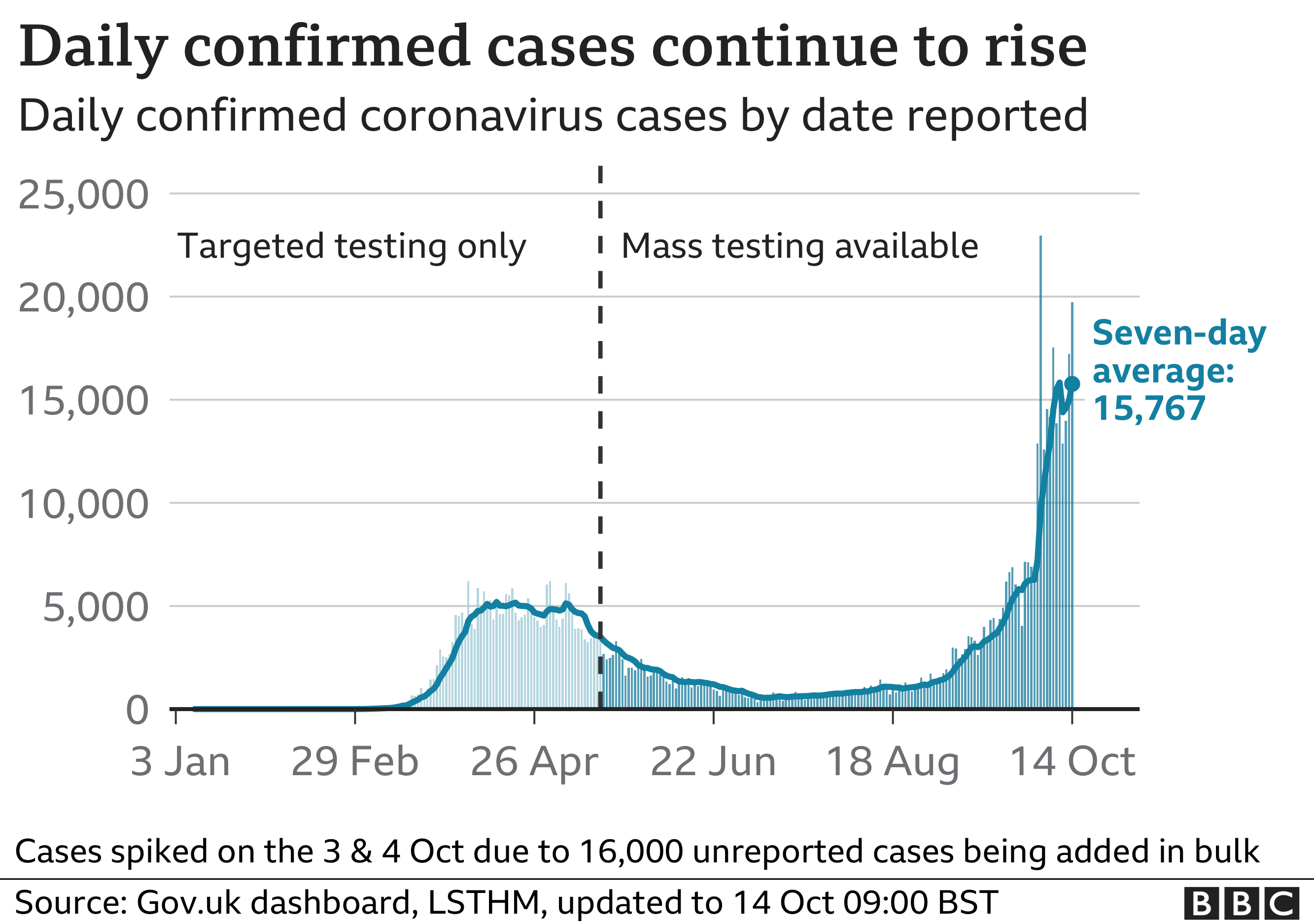 Publishedduration3 minutes agomedia captionThe prime minister and Labour leader clash over policies for local and national restrictions to fight coronavirusA new three-tier system of regional Covid-19 restrictions in England “is the right way forward”, Boris Johnson has said.The PM told the House of Commons the policy “can bring down the virus” but that he did…

A new three-tier system of regional Covid-19 restrictions in England “is the right way forward”, Boris Johnson has said.

The PM told the House of Commons the policy “can bring down the virus” but that he did not rule out going further.

Labour’s Sir Keir Starmer again called for a “circuit-breaker” – a short, limited lockdown in England to bring the virus under control.

He said such a move was supported by government science advisers.

The PM said he hoped the three-tier system would “avoid the misery of a national lockdown”.

He added: “I rule out nothing of course in combating the virus, but we are going to do it with the local, the regional approach that can drive down and will drive down the virus, if it is properly implemented.”

It comes as Wales prepares to ban people from parts of the UK that have high rates of coronavirus from travelling to the country from 18:00 BST on Friday.

On Wednesday, a further 19,724 coronavirus cases were recorded in the UK, while 137 more people have died within 28 days of testing positive for the virus.

The new system has begun in England, with the Liverpool region the first to enter the highest alert level.

Most of the country is in the lowest tier – medium – but millions of people in the North and the Midlands face extra curbs on households mixing.

Schools, close-contact services and all retail outlets will remain open under basic measures, even in the highest alert areas.

Meanwhile, in Northern Ireland, schools will close from Monday and pubs and restaurants face new restrictions on Friday.

Scotland’s First Minister Nicola Sturgeon has advised Scots against travelling to high risk areas of England as she singled out Blackpool as “associated with a large and growing number of Covid cases in Scotland”.

Sir Keir said a “circuit-breaker” would help buy time to “save lives, fix testing, and save the NHS”.

The Labour leader had called for its introduction on Tuesday, saying his proposal would keep schools open as normal by using the upcoming October half term.

However, he said it would mean that “all pubs, bars and restaurants would be closed” and compensated “so that no business loses out because of the sacrifices we all need to make”.

Speaking at Prime Minister’s Questions, he said Mr Johnson had rejected the advice of government science advisers, who had suggested a circuit-breaker when they met on 21 September.

A modern browser with JavaScript and a stable internet connection is required to view this interactive.

But the PM said the three-tier system was an “opportunity to keep things going, to keep our kids in schools, to keep our businesses going”.

“That, I think, is what the people of this country want to do. This is our opportunity to do that and suppress the virus where it is surging,” he said.

The BBC understands that a meeting of the Joint Biosecsurity Centre (JBC) suggested that Greater Manchester alongside much of north-west and north-east England, large parts of Yorkshire and parts of the Midlands should be moved into the highest tier of Covid restrictions.

But the JBC recommendations will not necessarily be enforced. Discussions are likely to continue between local and national politicians and officials over the coming days.

The approach of targeting different restrictions at different parts of England has exposed a rift between Westminster and some local politicians, who have called for more say over what’s happening in their areas.

Under pressure to say why he has so far rejected the idea of a national “circuit-break” period, Boris Johnson was keen to stress that the current package of measures could bring down transmission IF there was co-operation at a local level and proper enforcement.

For now, the PM seems determined to continue to try to tread this middle path – mindful also perhaps of the chunk of his own MPs concerned about even the current range of restrictions and the impact on the economy.

The risk is that he may have lost valuable time, if he does decide to change course.

Separately, a scientific report has suggested a two-week circuit-breaker at the end of this month may halve coronavirus deaths between now and the end of the year.

The researchers said the measure “buys more time to put other controls in place”, but there is huge uncertainty over some of their predictions.

Local politicians in Greater Manchester have argued against the region being put into the highest tier of restrictions saying that, without increased financial support, they would prefer a circuit-breaker.

Greater Manchester mayor Andy Burnham said he would consider a legal challenge if the government placed the area in Tier 3 coronavirus restrictions, adding that such a move would be “by imposition, not consent”.

Local leaders would consider “other routes”, including legal ones, to protect “thousands of residents who are going to be left in severe hardship in the run up to Christmas”, he added.

Steve Rotheram, mayor of the Liverpool City Region, said he and Mr Burnham were considering a joint legal action against the new furlough scheme.

He said that it appeared “discriminatory” that No 10 had offered to pay 80% of workers’ pay in March “but because it’s happening in the Liverpool City Region you’re only going to be able to get two-thirds of your wage”.

But Bolton Council leader David Greenhalgh said he was not in support of a circuit-breaker at this time.

The PM said the disease was now “appearing much more strongly” in some parts of the country than others so a different approach was needed to that taken earlier in the year.

He highlighted the fact there were 670 coronavirus cases per 100,000 residents in the Liverpool region, compared with 33 per 100,000 in Cornwall.

“That is why the tiered approach… is the right way forward,” he said.

“We want to put in the most stringent measures necessary in the places where the virus is surging in order to get it down where it is surging,” he added.

“That is the logical thing to do.”