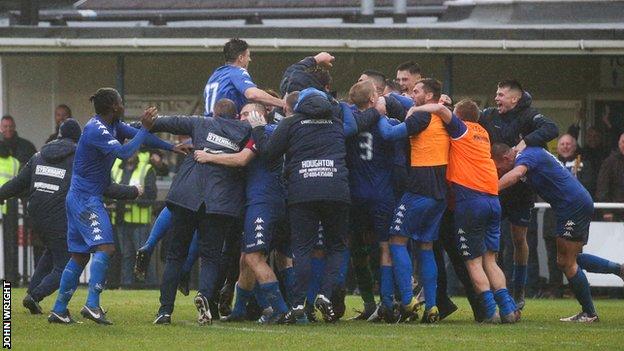 Christchurch knocked out National League North side Gloucester in a penalty shootout to reach the third qualifying roundVenue: Hurn Bridge Sports Ground Date: Tuesday 13 October, KO 19:45 BSTCoverage: Live on BBC iPlayer, Red Button and BBC Sport online.Fifteen years after losing his son in a car accident, Tony Bernard will look on at the…

Fifteen years after losing his son in a car accident, Tony Bernard will look on at the stand which bears his name and hope for inspiration as Christchurch aim for FA Cup progress in front of the BBC Sport cameras.

Former Christchurch player Stevie Bernard was just 18 when he died along with two friends in the accident on the A27. His family have since helped raise almost half a million pounds for the charity named after him.

“We’ve had our down times at the club so it’s nice to have a good day,” 63-year-old Tony says as the club and town prepare for the visit of Dulwich Hamlet in the FA Cup third round qualifying.

“Stevie had just had England schoolboys trials and was playing for Chichester, who made the second round last year, when he died.

“We play a friendly every year between the sides and it got cancelled this year, so fingers crossed we meet in the next round.

“We have raised £485,000 for the charity and have helped tens of thousands of kids.

“I’m quite happy looking at the stand hoping he’s looking down on the lads. If there is an extra hand he can give them I know he will.”

On a ‘normal’ pre-covid game they may expect 70 through the gates.

The club has had to have extra electric points put in for the first televised match in the club’s 135-year history as they aim to extend their best-ever run in the old competition.

Opponents Dulwich were on BBC TV last year when they hosted Carlisle in the first round.

They will start as favourites but, as Tony says, “hopefully they’ll have a horrible journey down from London”.

Harrogate Town manager Simon Weaver took some headlines this summer when, upon promotion, he became the longest-serving manager in the Football League.

Weaver’s 11-year reign at the new League Two side is certainly impressive, but he’s got nothing on one manager in FA Cup action this week – who’s into his second millennium at the reins.

Step forward Dave Diaper, who took charge of Sholing FC of the Southern League Division One South side way back in 1999.

They take on Walton Casuals, with the manager being able to plan from his new desk.

“It’s a great experience to be in one job as long as I have, I’ve created five or six teams in that time and it’s been great to see the club grow in the community.

“Off the field we have always been behind but we are getting nice facilities now and I’ve even got an office for the first time this year.

“All we had was a changing room before, the building was 60 years old, so I’m up here all the time now, which has been great – though my wife wouldn’t agree.”

Diaper’s longevity has extended to his players: Midfielder Byron Mason has played over 600 times, his brother Dan has scored an incredible 221 goals in the last six years, and at least six other players have made more than 200 appearances for the club.

“There’s no such thing as loyalty in football but these guys have certainly been loyal to me,” Diaper said.

“You either change your manager or the team every few years, that’s the model, but that hasn’t happened here. We don’t take losing lightly but we try and make it an enjoyable experience.

“We have got six or seven players who could easily play higher, with a good pedigree. They have got the talent and all I can ask is that they put on a show on Tuesday.”

Who else should we keep an eye on?

In total five clubs from from step five of the non-league pyramid have made it this far, namely:

Longridge Town and Skelmersdale United (play each other)

The Longridge Town v Skelmersdale United match guarantees a step five side in the fourth qualifying round draw, where the likes of Notts County and Chesterfield enter.

Get through that – and it’s first-round proper time…