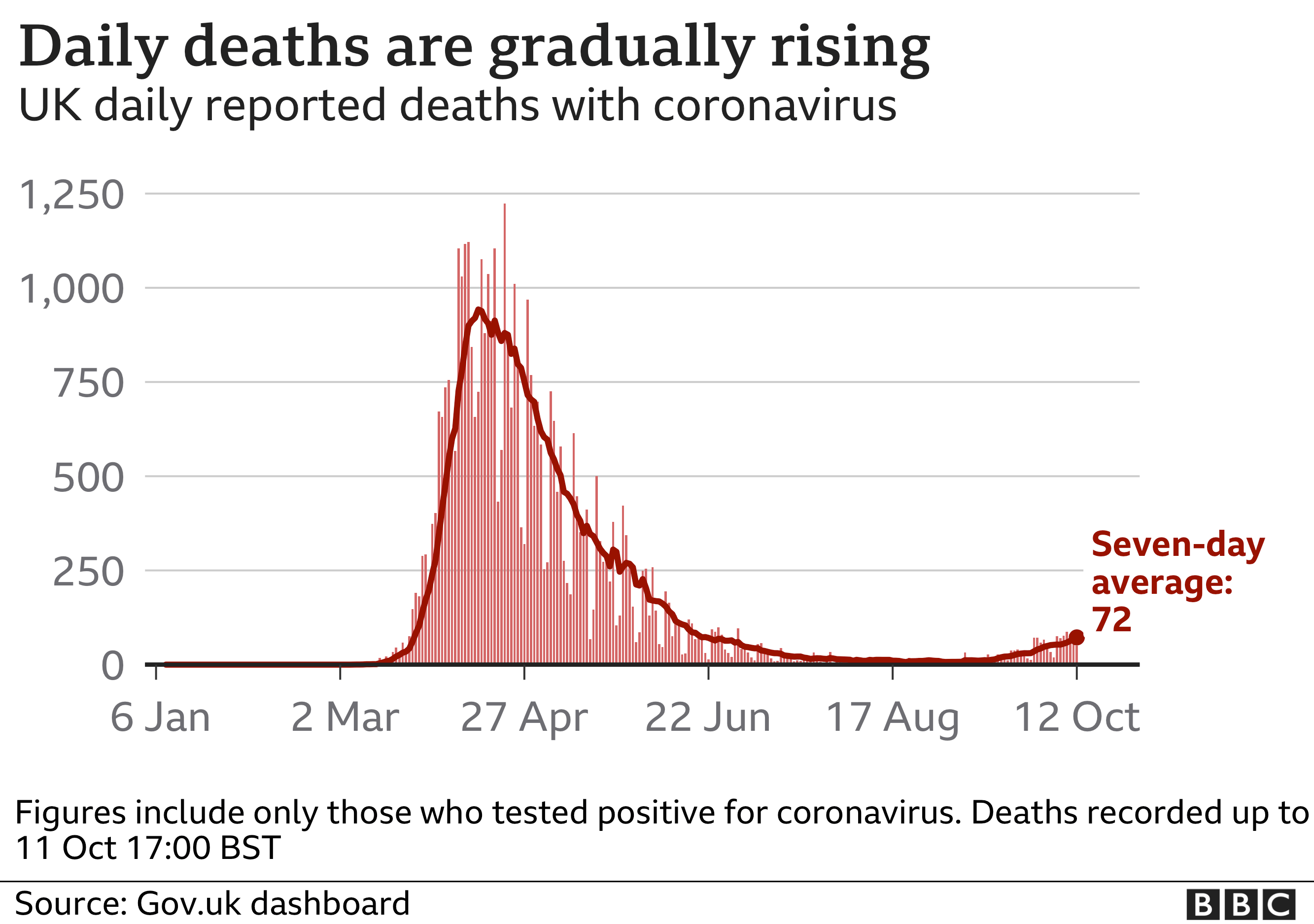 Publishedduration34 minutes agoimage copyrightGetty ImagesThe government’s scientific advisers called for a short lockdown in England to halt the spread of Covid-19 last month, newly-released documents show.The experts said an immediate “circuit breaker” was the best way to control cases, at a meeting on 21 September.Labour said the advice was ignored but No 10 said it…

The government’s scientific advisers called for a short lockdown in England to halt the spread of Covid-19 last month, newly-released documents show.

The experts said an immediate “circuit breaker” was the best way to control cases, at a meeting on 21 September.

Labour said the advice was ignored but No 10 said it took “robust” action.

It comes as the Liverpool region prepares to enter a “very high” Covid alert level from Wednesday, the highest of a new three-tier system.

Speaking at a Downing Street news conference on Wednesday evening, Boris Johnson said the alert system for England could succeed in driving cases down if it was implemented “very effectively”.

And the PM said he rejected the “extreme route” of a full nationwide lockdown “right now”.

But at the same press conference, England’s chief medical officer, Prof Chris Whitty, voiced concerns over the impact of the new measures, saying he was not confident they “would be enough to get on top of” the virus without further local restrictions.

Minutes from the meeting of the Scientific Advisory Group for Emergencies (Sage), which feeds into UK government decision making, stated the advisers had called for the immediate introduction of a short national lockdown three weeks ago.

The papers – released shortly after the No 10 news conference ended – also showed the scientists suggested:

Of all the measures proposed by the advisory group, just one – advising those who can work from home to do so – was implemented by the government at the time.

In the documents, Sage warned that “not acting now to reduce cases will result in a very large epidemic with catastrophic consequences”.

“The more rapidly interventions are put in place, and the more stringent they are, the faster the reduction in incidence and prevalence, and the greater reduction in Covid-related deaths,” the advisers added.

They also said NHS Test and Trace was having just a “marginal impact” and this would “likely decline further” unless the system expanded to keep up with the rise in cases and people were given support to enable them to self-isolate.

A separate document from 17 September stated that Sage believed a 22:00 closing time for bars, pubs, cafes and restaurants was also “likely to have a marginal impact”.

A 22:00 closing time was introduced for all hospitality venues in England from 24 September.

The BBC’s political editor Laura Kuenssberg said the minutes suggested “how much the political atmosphere has changed”.

She added: “At the start ministers were very keen to be seen to be following Sage – this paper makes clear how they are making different decisions now.”

Labour’s shadow health secretary Jonathan Ashworth said: “The government now needs to urgently explain why it ignored its own scientists and what it will be doing to get control of the virus.”

A No 10 spokesman responded: “We took robust but targeted and proportionate action in September, including introducing the rule of six, restrictions to hospitality opening hours, and advice for people to work from home where they can, alongside tougher enforcement.

“This was carefully judged to protect lives and reduce the transmission of the virus whilst minimising the impact to livelihoods, and followed extensive engagement including with scientific advisers.”

Cases are increasing across the whole of the country and the number of people in hospital is now higher than before the full lockdown in March.

We are at a critical stage in the epidemic.

It is at this moment the gulf between the official scientific advice and the decisions made by government has been laid bare.

It is the case that “advisers advise and ministers decide”. When considering new measures to stop Covid, government must also take into account the harms they cause to our health and the economy.

But there is some concern the government is doing too little, too late.

And that we can either choose the terms for controlling the virus now, or wait and the virus will force our hand as it did with lockdown in March.

A Sage document from 21 September warned that “single interventions by themselves are unlikely to be able to bring the R below one” and both local and national measures are needed.

However, a document examining measures including a “circuit-breaker” of two to three weeks, said this step, if it was “as strict and well-adhered to as the restrictions in late May”, could “put the epidemic back by approximately 28 days or more”.

“Multiple circuit-breaks might be necessary to maintain low levels of incidence,” it added.

The Sage documents were released shortly after the prime minister set out his three-tier system of alert levels for England.

During the press conference, Prof Whitty suggested there were questions over the effectiveness of the top tier of the new system, and said it was likely local authorities in the most-affected areas would have to go further than the base level of restrictions.

The new system is split into three alert levels: medium, high and very high. Most areas in England are in the medium alert level – meaning current restrictions continue, including the 10pm hospitality curfew and the rule of six.

Areas already under additional local restrictions are automatically in the high alert level – meaning bans on household mixing indoors are extended to include hospitality venues.

Nottinghamshire, East and West Cheshire and a small area of High Peak now come into this category, as well as Greater Manchester, parts of South Yorkshire, and north-east England. Around 4.4 million people will be in high alert areas.

The Liverpool City Region – home to 1.5 million people – becomes the first area to enter the very high alert level, with the closure of pubs and bars. Betting shops, gyms, leisure centres and casinos will also close in the region.

Household mixing will be banned anywhere indoors, and in outdoor gardens and hospitality. The rule of six will continue to apply in outdoor public spaces such as parks, according to government guidance.

A further 13,972 confirmed coronavirus cases were reported on Monday, with 50 more deaths within 28 days of a positive test recorded.