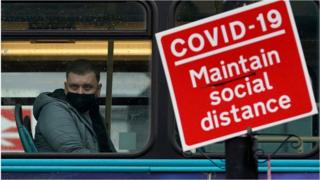 Image copyright Getty Images We have entered a crucial phase in the epidemic. Cases are increasing across the whole of the country and the number of people in hospital is now higher than before the full lockdown.It is at this critical moment that the gulf between the official scientific advice and the political decisions made…

We have entered a crucial phase in the epidemic.

Cases are increasing across the whole of the country and the number of people in hospital is now higher than before the full lockdown.

It is at this critical moment that the gulf between the official scientific advice and the political decisions made by government has been laid bare.

Documents released by the Scientific Advisory Group for Emergencies (Sage) reveal a call to action three weeks ago.

“The re-imposition of a package of measures is required urgently,” it warned on 21 September.

It added: “The more rapidly these interventions are put in place the greater the reduction in Covid-related deaths and the quicker they can be eased.

“Not acting now to reduce cases will result in a very large epidemic with catastrophic consequences.”

The government has to balance not only the impact of measures on the virus, but also their damaging impact on people’s health, wellbeing and the economy.

There was official advice to work from home, but none of the other measures have been implemented nationally.

The documents were published shortly after Boris Johnson’s televised briefing on Monday night, during which the chief medical officer for England, Prof Chris Whitty, openly declared nobody thought the current Tier Three measures being introduced around Liverpool would stop the virus.

“I am not confident and nor is anybody confident that the Tier Three proposals for the highest rates, if we did the absolute base case and nothing more would be enough to get on top of it,” he said.

He said it would take “significantly more” to achieve control and powers to do so had been given to local authorities.

Prof Calum Semple, who was at the Sage meeting on 21 September, said the three tier system had come too late and he believes that a short national lockdown could be needed within weeks.

Test and Trace is at the heart of the government’s plans – a way of avoiding the need for a national lockdown by targeting restrictions where the virus is.

Sage says “this system is having a marginal impact on transmission” and that unless it’s resources grow faster than the epidemic then Test and Trace “will further decline in the future”.

The documents say a two-week circuit break in October could drive cases down, essentially rewinding the clock by 28 days. This could buy time for Test and Trace to catch up.

The Sage papers also reveal how the widely-supported decision to keep schools open means a “wide range of other measures will be required”.

The national R number – the number of people each infected person passes the virus onto on average – is between 1.2 and 1.5. Anything above 1.0 means the epidemic is growing.

One set of Sage documents reveals how much individual policies may cut the R number by:

For each measure aimed at targeting the virus, Sage also details the damaging effect the measures are likely to have.

“Government will continue to have to juggle social freedom, economic activity and transmission for many months. It is imperative, therefore, that a consistent series of measures is adopted over the next 6-9 months,” it says.

Nine months from that meeting would be June.

The current situation has been widely predicted, including in a major report in July that warned there could be more deaths in the second wave than the first.

“We’re on track to have 100 deaths a day in next week or so, that’s very much tracing some of those worst case scenarios, if the outbreak’s increasing it doesn’t bode well for November/December,” said Dr Adam Kucharski, from the London School of Hygiene and Tropical Medicine and the modelling group that feed advice to Sage told me.

There is also mounting angst about what the government is trying to achieve.

The R number is thought to be comfortably above 1 in every region of England, not just parts of the North West.

Jeremy Farrar, the director of the Wellcome Trust and Sage member, tweeted: “Objective has to be to get R<1, if that is not the objective [then we] need clarity on what [the] objective is."

The the University of Warwick’s Dr Mi