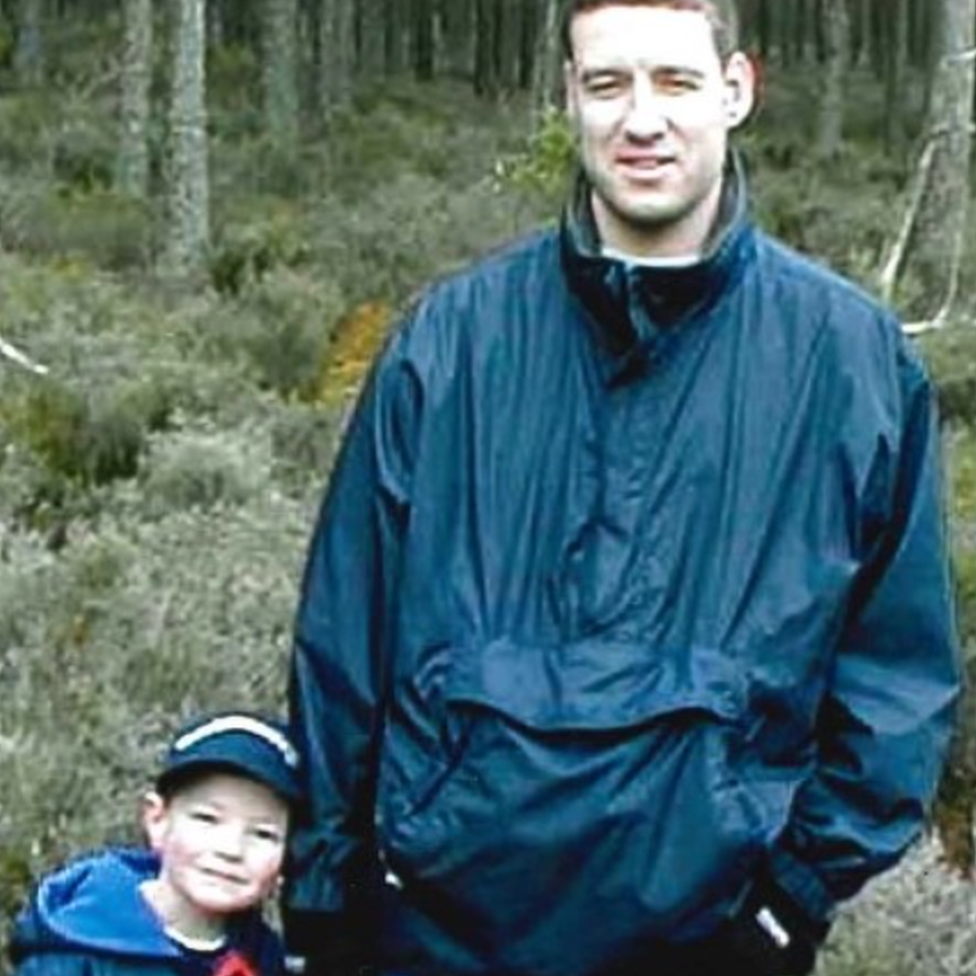 Publishedduration5 hours agoimage copyrightWilson familyimage captionA young Andrew Wilson with his father Alistair, mother Veronica and younger brotherThe son of bank worker Alistair Wilson, who was shot dead on the doorstep of his home in 2004, has appealed for help in catching his father’s killer.Andrew Wilson was aged just four at the time of the…

The son of bank worker Alistair Wilson, who was shot dead on the doorstep of his home in 2004, has appealed for help in catching his father’s killer.

Andrew Wilson was aged just four at the time of the murder in Nairn in the Highlands.

He says the only memory he has left of his father is seeing him lying on the ground moments after being shot.

It is the first time Mr Wilson has spoken publicly about the murder and how it has devastated his family.

He said: “I still cannot believe how someone could shoot my dad dead on our doorstep while my brother and I were upstairs.

“Photographs are all I have and no family should suffer the way we have all these years.

“I am appealing on behalf of my family to anyone who may have any information, no matter how big or small, to please come forward. Someone out there could have the missing piece of information.”

Mr Wilson’s wife Veronica had answered the door to his killer – a stocky man wearing a baseball cap – who asked for Alistair Wilson.

Mr Wilson spoke to the man and was handed an empty blue envelope with the word Paul written on it.

He was then shot with a German-made handgun.

A massive police inquiry was launched at the time, but no-one has been apprehended and detectives continue to investigate the case.

Andrew, now 20, recalled the moment he saw his father lying on the doorstep.

He said: “Someone came to our family home on a Sunday evening while my dad was reading my brother and me bedtime stories after our bath.

“The next thing I know I am looking at my dad lying in our doorway covered in blood.”

Mr Wilson’s family, along with detectives, are using the approaching 16th anniversary to make a renewed appeal for information in the hope of finally bringing someone to justice.

Andrew Wilson added: “I was four years old when this happened and my dad was only 30.

“There would be no more bedtime stories, no more playing football or helping him in the garden.

“My dad and I missed out on so many things together, showing me how to tie a tie, driving lessons and taking me for my first pint.

“I am now a 20-year-old with little answers regarding my dad’s death. For the last 16 years I have been left wondering why I didn’t have a dad like all my friends.

“Nothing can bring my dad back, but knowing who did this and why could give us the closure we need. Any information could be crucial to our case.”

Det Insp Gary Winter, of the Major Investigation Team, has outlined the specific areas being focused on in the latest appeal.

“Alistair’s killer would now be approaching his 50s or 60s and has enjoyed a life denied to his victim and his family.

“The handgun used was a Haenel Suhl pocket pistol from the 1930s, which has distinctive H and S letters superimposed on the grip.

“We believe this weapon is likely to have been taken to the UK after World War Two as some form of souvenir, however the ammunition used in the murder is from the 1980s or 90s.

Det Insp Winter also highlighted the envelope given to Mr Wilson before the shooting – and the possibility that the murder was a case of mistaken identity.

He said: “The blue envelope handed to Alistair by the killer had the name Paul on it, which may or may not be relevant. Does this mean anything to you in the context of this investigation?

“Lastly, do you know any other person by the name Alistair Wilson, who may have been the intended target of violence or retribution to any extent?”

Mr Winter said the force remained committed to ensuring the person responsible for the murder was brought to justice.

He added: “Someone out there knows what happened to Alistair and I hope this appeal serves as a vital reminder that it is never too late to come forward with information. Do not assume that the police already know the information you possess.”

Anyone with information is asked to contact the police on 101 or e-mail a dedicated inbox at SCDHOLMESAberdeen@scotland.pnn.police.uk.