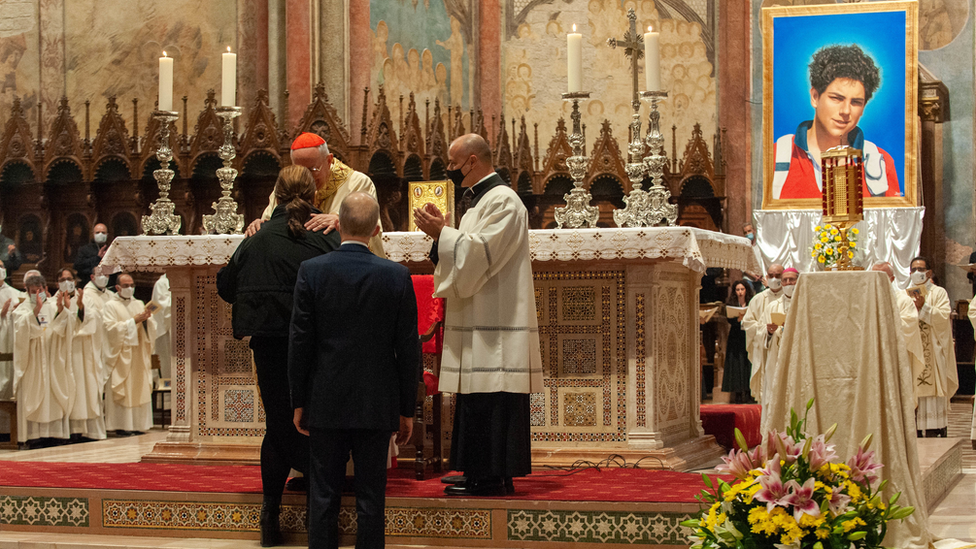 Publishedduration25 minutes agoimage copyrightPA Mediaimage captionCarlo Acutis’s parents attended their son’s beatification ceremony on SaturdayAn Italian teenager who used the internet to spread his faith is on a path to becoming the Catholic Church’s first millennial saint.Carlo Acutis, who died of leukaemia in 2006 aged 15, has already been dubbed “the patron saint of the…

An Italian teenager who used the internet to spread his faith is on a path to becoming the Catholic Church’s first millennial saint.

Carlo Acutis, who died of leukaemia in 2006 aged 15, has already been dubbed “the patron saint of the internet”.

On Saturday, he was beatified at a ceremony in the town of Assisi and moved one step closer to sainthood.

Acutis was placed on the path to sainthood after the Vatican ruled he had miraculously saved another boy’s life.

The Church claimed he interceded from heaven in 2013 to cure a Brazilian boy who was suffering from a rare pancreatic disease.

He is believed to be the youngest contemporary person to be beatified – the last stage before sainthood.

A ceremony was held in the Basilica of St Francis of Assisi on Saturday and a portrait of Acutis was unveiled. Those gathered also praised Acutis for his charity work.

“Carlo used the internet in service of the Gospel, to reach as many people as possible,” Cardinal Agostino Vallini said at the ceremony.

“Young people might have been tired of a pastoral ministry that’s maybe a bit out of step with the times despite all its efforts,” Church spokesman Enzo Fortunato said, according to the AFP news agency.

“But the Lord intervenes in history and human affairs and gives us these guiding lights,” he added.

For Acutis to become a saint, the Vatican would have to verify a second miracle in his name. But Pope Francis has waived this requirement on previous occasions.

Acutis was born in London in May 1991 to Italian parents. The family soon moved to Milan, and he spent the majority of his life in the city.

“There was in him a natural predisposition for the sacred,” his mother, Antonia Salzano, told the Corriere della Sera newspaper earlier this year.

The teenager had a passion for computers and reportedly taught himself to code at a young age.

“He was considered a computer genius,” Ms Salzano said in an interview with Vatican News. “But what did he do? He didn’t use [computers] to chat or have fun.”

Instead, Acutis took care of websites for local Catholic organisations and also created some of his own.

But he was said to be conscious of the dangers of technology, something referenced by Pope Francis when he spoke about the teenager last year.

“[Acutis] saw that many young people, wanting to be different, really end up being like everyone else, running after whatever the powerful set before them with the mechanisms of consumerism and distraction,” the Pope said.

The teenager was also involved in charity work and spent his own money on helping disadvantaged people in his local area. He also volunteered at a soup kitchen in Milan.

“With his savings, he bought sleeping bags for homeless people and in the evening he brought them hot drinks,” his mother told the Catholic News Agency.

How does someone become a saint?

There are a few steps required on the path to sainthood in the Catholic Church.

The process to make someone a saint cannot normally start until at least five years after their death. But this waiting period can, in some circumstances, be waived by the Pope.

An investigation can then be opened to see whether the person lived their life with sufficient holiness. Evidence is gathered, and if the case is accepted the individual is called a “servant of God”.

The department that makes recommendations to the Pope on saints scrutinises the evidence.

If the case is approved, it is passed to the Pope who decides whether the person lived a life of “heroic virtue”. If so, they can be called “venerable”.

The next stage, beatification, requires a miracle to be attributed to prayers made to the individual after their death.

Incidents need to be “verified” by evidence before they are accepted. After beatification, the candidate is given the title “blessed”.

This is the final step in declaring a deceased person a saint. To reach this stage, a second miracle normally needs to be attributed to the individual.