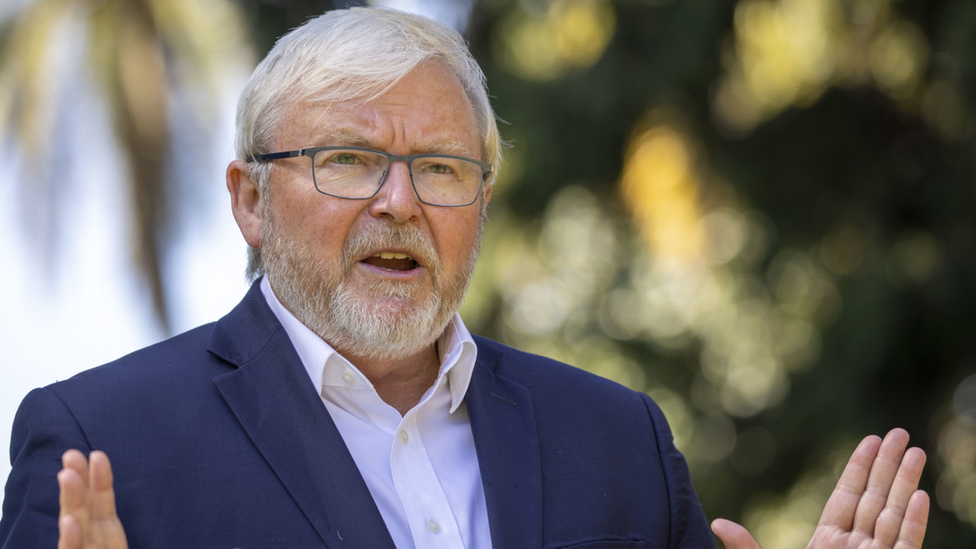 More than 100,000 people have signed a petition by former Australian PM Kevin Rudd calling for an inquiry into Rupert Murdoch’s media dominance in Australia.

Mr Rudd said a top inquiry should scrutinise media ownership but particularly Mr Murdoch, calling him “a cancer on our democracy”.

News Corp Australia and Mr Murdoch have not commented on the petition.

The company has often defended its reporting against accusations of political bias, racism and climate change scepticism.

Mr Rudd posted the petition on a parliamentary website on the weekend and said an “avalanche of support” for it had briefly overwhelmed IT systems.

The petition will be submitted to parliament on 5 November. Unlike in some nations, Australia’s government is not obligated to respond to it when support reaches a certain level.

What is the criticism?

Mr Rudd, a Labor prime minister from 2007-2010 and again in 2013, has been a frequent critic of Mr Murdoch and his impact on domestic politics.

The petition calls for a royal commission – Australia’s highest form of public inquiry – into “abuse of media monopoly in Australia in particular by the Murdoch media”, Mr Rudd said.

The company’s mastheads include The Australian, Sydney’s Daily Telegraph and Melbourne’s Herald Sun.

Among recent controversies, the publisher has been accused of minimising the role of climate change in reporting last summer’s bushfires, and of racism in a cartoon depiction of Serena Williams.

Though he is not involved in the petition, conservative former Prime Minister Malcolm Turnbull has also previously criticised News Corp Australia.

He has accused editors of working with right-wing politicians to influence elections and government policy.

It has often defended the integrity of its publications, which are among the best-selling in Australia.

In response to criticism of its bushfires coverage in January, chairman Michael Miller said the company did not deny climate change.

“However, we – as is the traditional role of a publisher – do report a variety of views and opinions on this issue,” he told The Sydney Morning Herald.

How widespread is Murdoch’s reach?

Rupert Murdoch’s influence in Australian, US and UK media has faced increasing scrutiny in recent years.

In the UK, he owns The Times and The Sun newspapers as well as radio outlets, while his US empire includes Fox News, the Wall St Journal, and Dow Jones news wires.

News Corp Australia has the only metropolitan newspapers in Queensland, South Australia, Tasmania and the Northern Territory.

Its reporting has won many awards, including last year’s most prestigious prize in Australian journalism – the Gold Walkley.