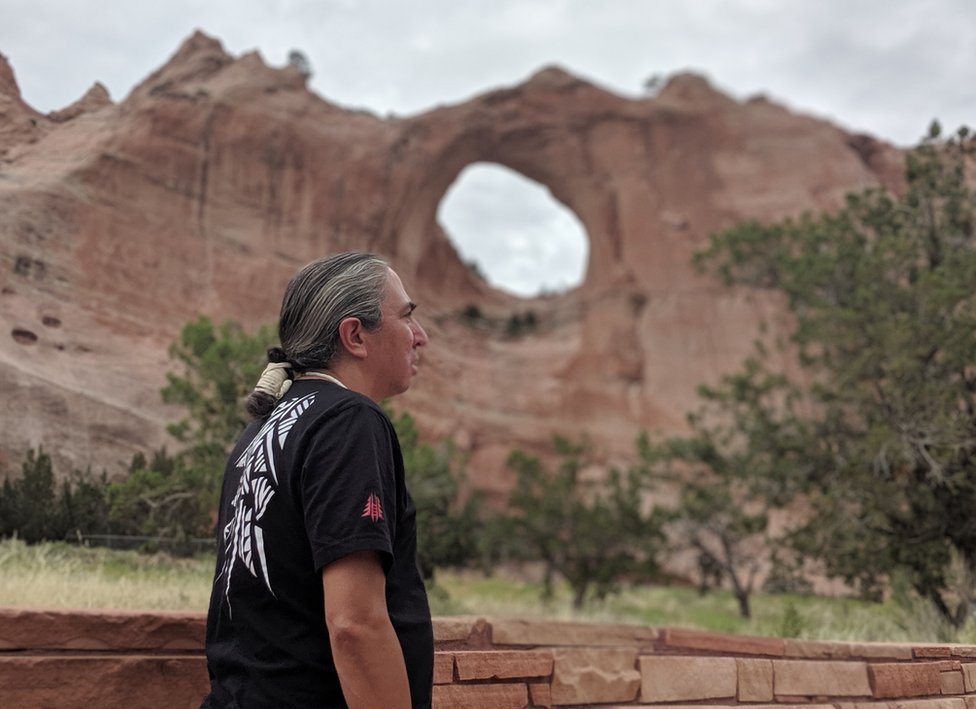 By Rebecca SealesBBC NewsPublishedduration6 hours agoimage copyrightPeter Ruprecht / Mark Charles / Michael Gillmanimage caption(From left): Brock Pierce, Mark Charles and Jade Simmons are all running for the US presidencyThe US has had presidents for more than 230 years, but only the first – George Washington – has ever been elected as an independent candidate.…

The US has had presidents for more than 230 years, but only the first – George Washington – has ever been elected as an independent candidate.

The twin peaks of US politics, the Republican and Democratic parties, dominate media coverage and campaign donations so completely that the chances of an outsider winning are virtually nil.

What kind of person looks at those near-insurmountable odds and thinks – I’m running anyway?

Quite a range as it turns out: As of 9 October, some 1,216 candidates (of varying levels of seriousness) have filed with the Federal Election Commission to run for president.

The BBC asked three of them – a concert pianist and motivational speaker, a Native American IT technician, and a crypto billionaire – what they stand for, and why they deserve the votes of Americans.

‘Americans will see the current two options are not the choice’

“This seemed to me to be a time when we couldn’t afford to do business as usual,” she says. “I’m the daughter of a civil rights activist, and the way my father raised me was that if you see voids, if you see injustices, you need to ask yourself if that might be you that needs to be leaning in.”

She says her goal is to create equal access to opportunity, through economic, educational and criminal justice reform. And in that spirit, she’s aiming to run “the least expensive campaign in the history of our nation”.

“We think it’s abominable that it costs now almost a billion dollars to run for president when the qualifications are that you are 35 years old, a US-born resident, and have lived here 14 years,” says Ms Simmons. “We’d rather spend that money on helping people.”

So is she a liberal or a conservative?

“It depends on who you ask!” she says. “Everything from disgruntled Bernie bros to conservative Christian pastors are liking our policy.”

Her background as a minister and a person of faith does not automatically denote conservatism, she says.

“I think Jesus is one of the most radical figures we have in history. And I think if you look at how he operated you might end up calling him progressive.”

The coronavirus pandemic has upended this year’s White House race, curtailing mass gatherings, pushing party conventions online and dominating news headlines. But for Jade, the major challenge of her campaign has been simply letting people know she exists.

“Even in a time where black lives supposedly matter, and black voices matter, and we saw statements of solidarity coming from the media and corporations, those same media outlets – including black media outlets – have refused to tell the story that I’m here.

“You have maybe a celebrity like a Kanye West who didn’t even file his papers, and on the Fourth of July when he announced, within 30 minutes he was covered by every major network. So we were a little bit shocked that the narrative of democracy is not carried out as much as American voters think when you look behind the scenes.”

While the Republican and Democratic nominees will be on the ballot in all states, independents must meet an array of state deadlines and access requirements.

Ms Simmons’ name will appear on the ballot in Oklahoma and Louisiana, but in 31 other states she’s registered as a write-in candidate – meaning that if voters physically write her name down, their vote will count. She acknowledges the odds are absolutely against her, but still believes she can make it to the Oval Office – and if not this year, then at some point.

“I know it sounds wild, given the history of independents! We believe that if we stay standing long enough, there’s still some more disruption coming in – that most Americans are going to see that the current two options are not the choice.

“[…] We’ve been saying from day one, that we must restore the fabric of the nation. That’s a spiritual fabric, that’s a cultural fabric, a social and a racial fabric, and we feel that’s been ripped to shreds – primarily and intentionally by both political parties.

“So if I were to close my eyes and envision a nation… This can’t be just a flip-flop of power and revenge – ‘We get to get back at you.’ I see a palate-cleansing season where we can take a deep breath and say, ‘Where do we go from here?'”

‘I made a decision to live my life in service’

Brock Pierce is a former child actor who appeared in the Mighty Ducks franchise and starred as the president’s son in the 1996 comedy First Kid. But thanks to his second career as a tech entrepreneur, he’s also probably a crypto currency billionaire.

Why is he running for president? Partly because he is deeply concerned by the state of the country.

“I think that we lack a real vision for the future – I mean, what kind of world do we want to live in, in the year 2030? What is the plan? Where are we trying to get to, you know? You have to aim for something. And I see mostly just a lot of mud being thrown around, not a lot of people putting forth game-changing ideas. It’s getting scary. And I have a view of what to do.”

For the last four years, Mr Pierce has focused on philanthropic work in Puerto Rico, where his foundation recently raised a million dollars for PPE to give to first responders.

Asked what America’s priorities should be for the next four years, he suggests the country stops pursuing “growth for growth’s sake”, and measures its success by how well life, liberty, and the pursuit of happiness are upheld.

It’s hard to pin Mr Pierce down politically. The man described by Rolling Stone as “the hippie king of crypto currency” favours legalising cannabis, held a unicorn-themed wedding ceremony at Burning Man, and was so unimpressed at being placed on a Forbes rich-list that he vowed to give away his first billion dollars. He also believes strongly in personal freedom, and has donated thousands to Republican candidates.

“I have many liberal tendencies, just like I have conservative tendencies,” Mr Pierce says. “And I think it’s time we take a collective breath and a brave step into the future, because all of these ideologies have something to teach us.”

The 39-year-old’s life has not been free of controversy. When he was 19, three male actors accused him and two business partners of sexual assault. Mr Pierce denied any wrongdoing, and was never charged with a crime. The three plaintiffs withdrew their cases against him and never received any personal compensation. But inevitably, the headlines linked to that episode have made a presidential run a tougher prospect.

“Having your name in a story like that is… it causes immense harm,” he says. “But the positive thing out of it is, it taught me not to judge people.”

Federal Election Commission data shows Brock Pierce has pumped $3.7m into his campaign. He says his strategy is to end up in the White House not by winning the election outright, but by taking a single state in a close race, then forcing the House of Representatives to pick a winner.

“Every time that this has happened before, 100% of the time, they’ve always chosen the third-place or last-place candidate to be president as a compromise. Now it’s only happened once – 1824. And so our goal is to win a single state. And if we knock it out of the park, to win three.

“I turn 40 in November, which means I also have time on my side. And so we are also laying the groundwork for the future – not just for me as a candidate, but for all independent candidates going forward.”

And if he doesn’t pull it off? Mr Pierce says he has offers.

“I’m constantly invited to run for Governor of New York, Governor of Minnesota. I mean basically everywhere I go they’re like, Brock, you could actually fix this. Like if you don’t become president next year, would you try and run our state, would you run our city?

“I wouldn’t even spend a moment thinking about this until November 4th, and that’s what I tell everyone. Call me November 4th. But I made a decision, you know, to live my life in service, and so however I can be of greatest service I’m prepared to do that work well.”

‘We have to change some things this nation was founded on’

One factor that unites independent candidates is that they haven’t had to please a party majority to get a platform – so they run as themselves, on the issues that really speak to them personally.

Mark Charles is a prime example.

Professionally he’s worked as a computer programmer and in tech support, but he’s also an ardent social justice campaigner on issues affecting Native Americans and people of colour.

His goal is to be an alternative candidate for voters who don’t feel a kinship with the Trump or Biden tickets.

Mr Charles is of Navajo heritage, an identity which has deeply shaped his candidacy and his view of what America should be.

The land upon which Washington DC was built belonged to the Piscataway people.

“These were their lands, long before Columbus got lost at sea – and they are still here. And I am humbled to be living on these lands, on their lands, and I want to honour them as the host people.”

In the early 2000s, Mr Charles chose to move his family to a remote home on a Navajo reservation, “because I wanted to experience the more traditional life”. They would stay for 11 years.

“I saw several presidential elections from that vantage point,” he says.

“We were six miles off the nearest paved road, lived in the one-room Hogan – the traditional Navajo dwelling. There was no running water, no electricity in our community, our neighbours were rug weavers and shepherds.”

The family prepared to cook on a camping stove, haul water, and live by candle-light. What they hadn’t anticipated was how marginalised they would feel.

“The only groups of non-Natives we ever saw on the reservation were those who came to take our picture or those who came to give us charity. Almost no one came to build relationships with us,” says Mr Charles. “On top of that, I was understanding and seeing some of the historical trauma that came from the very unjust history against our people.

“I [could] feel myself becoming both more insecure and more angry.”

He made a resolution to reach outwards and foster understanding instead of growing bitter. Now he says he’s fighting for a truly inclusive, modern America which rejects inequality.

“Our Constitution, which starts with the words ‘We the people’ […] never mentions women, it specifically excludes Natives, and it counts Africans as three-fifths of a person,” says Mr Charles.

“And so this is what my campaign is all about: if we want to be a nation where ‘we the people’ truly means all the people, we have to do some foundational-level work. We can’t just say it and wish it was so: we actually have to go in and change some things that this nation was founded on, such as the racism, the sexism and the explicit white supremacy.”