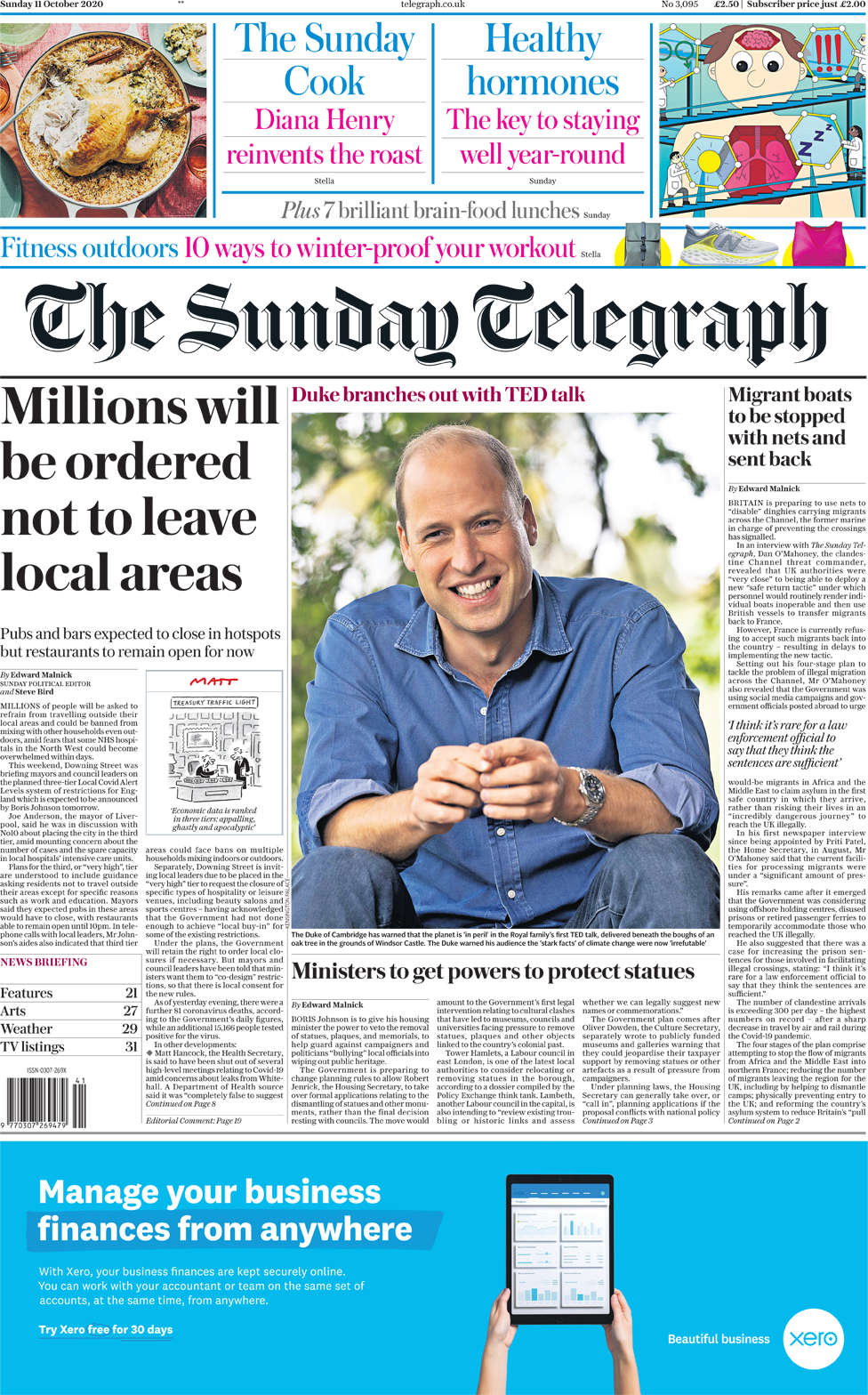 By BBC NewsStaffPublishedduration4 hours agoimage captionReaders of the Sunday People are met with an eerie image of Boris Johnson’s face merged with that of former prime minister Margaret Thatcher. The paper says the prime minister is “turning into” the “new Maggie” as the north of England “faces up to tough new lockdown measures”.image captionThe Sunday…

The Sun on Sunday says the new coronavirus restriction levels to be unveiled by Prime Minister Boris Johnson on Monday will be “very high risk”, “high risk” and “medium risk”. The paper says ministers have abandoned plans to use traffic light coding for the system amid fears that people living in “green” areas may feel they are safe to carry on as normal.

Under the headline “town halls to take control of war on virus,” the Sunday Times reports that local authorities will be given more control of the coronavirus test and trace system. The paper says with Covid “running rampant”, ministers want local teams to knock on doors and ask people to self-isolate. It’s hoped the new approach will generate “community spirit” and boost compliance. The Conservative mayor of the West Midlands, Andy Street, tells the paper trials of local contact tracing programmes have successfully identified between 98% and 100% of cases.

A “crucial day for Boris to get the balance right,” is the message from The Sunday Express’s editorial ahead of Monday’s announcement of a new system of restrictions for England. The paper says while the prime minister has a duty to protect citizens, he also needs to remember he cannot “lay waste to the economic landscape”.

The Sunday Telegraph’s leader also emphasises the importance of the prime minister getting the message right. “He needs to sell and explain his vision,” it says, pointing out that Mr Johnson cannot simply expect the public to accept it automatically.

The Sunday Mirror uses its leader column to call for the new restrictions to be applied “fairly and evenly”. It says many constituencies held by senior Conservatives – including the prime minister’s – have higher infection rates than the levels that saw northern cities subjected to a tightening of the Covid rules in July.

In the Sunday People, the Labour mayor of Liverpool, Joe Anderson, says the government’s approach risks dragging the country back to Margaret Thatcher’s divided Britain of the 1980s when violence erupted over pit closures and union disputes. The People’s leader says the prime minister “must be for turning”.

The Mail on Sunday says Mr Johnson heard the chancellor, Rishi Sunak, “forensically” pick apart data provided by scientific advisers to justify a hard lockdown – reportedly pointing out that demands to shut hospitality venues are based on “patchy and flawed” information from just 165 pubs, restaurants and cafes.

In a Mail on Sunday exclusive, the health secretary is accused of flouting the government’s 22:00 curfew to enjoy a glass of white wine. An unnamed senior Conservative MP says Matt Hancock was drinking wine in a House of Commons bar at 22:25 last Monday night. “Everyone is panicking and trying to cover for Matt, but I know what I saw,” the source says. But a spokesperson for the health secretary has told the Mail no rules were broken – and while Mr Hancock was in the Smoking Room bar prior to a vote at 21:42, he then “departed the Parliamentary estate to go home”.

In other coronavirus news, the Observer says there are “growing signs” hospitals in virus hotspots are struggling to cope, with elective surgery in Liverpool soon to be cancelled.

“Stupidity isn’t a valid defence for an MP” is the Sun on Sunday’s assessment of Margaret Ferrier’s explanation as to why she travelled to the Commons after experiencing symptoms and then back to Glasgow despite knowing she had tested positive for Covid. In its editorial, the paper says it is “astonishing that she is stubbornly refusing to stand down from her £80,000 job”.

The Sunday Telegraph reports that Britain is preparing to use nets to disable migrant dinghies attempting to cross the Channel. The plan would then see vessels transport migrants back to France. Dan O’Mahoney, the former marine appointed by the government to tackle the crossings, has said the UK is “very close” to deploying the tactic. But its use is being held up by the French – who, he says, are refusing to accept the migrants back.

“Wrap up and put woolly socks on” is the advice the Sunday Times gives to rail passengers, who have been told to expect chillier travel this winter. The paper says a meeting of the Rail Delivery Group on Tuesday could see it become obligatory for windows to be left open throughout journeys and for doors to be left open at stations for as long as possible as part of attempts to extract air possibly containing the coronavirus. The move is part of attempts to shore up passenger confidence after the number of travellers slumped in the spring to levels “last seen in the days of Queen Victoria”.

A senior Conservative has told The Sunday Times that Downing Street has “written off” President Donald Trump’s chances of being re-elected next month. “Panicking No 10 dumps Trump and woos Biden” is the headline. It says Mr Johnson was shown modelling last month that had the incumbent on course for a landslide defeat. Part of the new strategy has seen the UK’s Foreign Secretary Dominic Raab meet with the Democratic house speaker Nancy Pelosi and the British ambassador in Washington DC, Karen Pierce, hold talks with Joe Biden’s foreign policy advisers.

And finally, the Sun on Sunday has learned the gift shop at Balmoral has stopped selling postcards of the Duke of York. One tourist was reportedly told by a sales assistant that the cards had been taken away and no more would be made. With that in mind, the Sun has mocked up an alternative card for its readers featuring Prince Andrew in front of Pizza Express in Woking. The restaurant gained notoriety last year after the duke referenced it during a Newsnight interview about his links to the convicted paedophile Jeffrey Epstein.