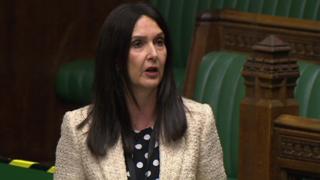 Image caption Margaret Ferrier travelled back from London to Glasgow after testing positive for coronavirus An MP who used public transport while knowing she was infected with coronavirus has called it a “blip”.Margaret Ferrier argued that the virus “makes you act out of character” in an interview with the Sun on Sunday.She faced calls to…

An MP who used public transport while knowing she was infected with coronavirus has called it a “blip”.

Margaret Ferrier argued that the virus “makes you act out of character” in an interview with the Sun on Sunday.

She faced calls to quit after travelling from Glasgow to London with Covid-19 symptoms last month, then returning home after testing positive.

The SNP suspended Ms Ferrier and the Metropolitan Police is investigating the incident.

Scotland’s first minister, Nicola Sturgeon, has said she “couldn’t be clearer” and Ms Ferrier should resign.

The MP, 60, told the paper that she “panicked” and insisted she followed the rules.

“A lot of people say Covid makes you do things out of character. You’re not thinking straight,” she said.

She said she took a test on Saturday, 26 September because she had a “tickly throat” – but had no symptoms on the Sunday or Monday, when she travelled to London for a debate.

On receiving her test result on the Monday night in London, she said she began “panicking” and “wanting home”.

“I don’t have a flat in London. You’re thinking, ‘Am I going to get worse in a week’s time or a few days’ time’,” she said, adding that she was worried she would have to self-isolate in a hotel for two weeks.

“I felt there was no alternative and that’s why I took the train. That’s the decision I took at the time.”

First Minister Nicola Sturgeon said no party leader has the power to force an MP to resign from parliament.

But she said Ms Ferrier’s “lapse of judgement” was “so significant and so unacceptable” that she should step down.

Speaking on Sky’s Sophie Ridge on Sunday programme, Ms Sturgeon said: “We suspended her from the party and we now have a due process to go through. I can’t unilaterally decide to expel somebody.

“But I couldn’t be clearer – she should step down.

“I’ve read her comments in the media today but I still hope she will do the right thing.

“It is unacceptable that someone in her position flagrantly disregarded the rules like that.”

Ms Ferrier is also believed to have attended Mass at a church in Glasgow after showing Covid symptoms.

At the beginning of the month, she apologised and said she “deeply regretted” her actions.

Scotland’s First Minister, Nicola Sturgeon, described her actions as “reckless, dangerous and completely indefensible” and said she should resign as an MP.

But Ms Ferrier told the Sun on Sunday she wants to continue representing her constituents in Rutherglen and Hamilton West.

Responding to the criticism, Ms Ferrier said: “It may be a serious error of judgment. I’m not denying that. People may be saying, ‘You should have known better, you’re a public figure’.

“But at the end of the day it still hurts. You then think is all that hard work and dedication just wiped away?”

She also described regulations and guidelines issued during the pandemic as “muddled”.