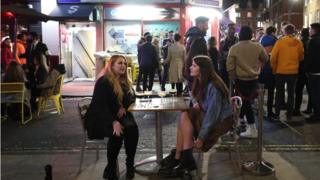 Image copyright PA Media The UK has reached a “tipping point” in its coronavirus epidemic similar to that last seen in March, one of the country’s top scientists has warned.England’s deputy chief medical officer Prof Jonathan Van-Tam said the seasons were “against us” and the country was running into a “headwind”.More deaths would follow a…

The UK has reached a “tipping point” in its coronavirus epidemic similar to that last seen in March, one of the country’s top scientists has warned.

England’s deputy chief medical officer Prof Jonathan Van-Tam said the seasons were “against us” and the country was running into a “headwind”.

More deaths would follow a rise in cases over coming weeks, he said, and urged people to limit social contact.

On Monday, Boris Johnson is expected to announce tougher restrictions.

In a statement to MPs, the prime minister is expected to set out plans for a three-tier local lockdown system which would see every region in England placed in one of three tiers, depending on the severity of cases.

Across the UK, the R number – the average number of people each infected person passes the virus onto – is now estimated between 1.2 and 1.5. Anything above 1.0 means cases are increasing.

On Saturday, 15,166 people in the UK were reported to have tested positive for coronavirus – up 1,302 on Friday’s figure, according to the government’s dashboard. There were a further 81 deaths – a decrease of six on Friday.

However, the Office for National Statistics estimates 224,000 people in homes in England had the virus, up to 1 October – roughly double the figure reported by the ONS for each of the preceding two weeks.

In his statement published on Sunday, Prof Van-Tam said that while the epidemic “re-started” again among younger people over the past few weeks, there is “clear evidence of a gradual spread into older age groups” in the worst-hit areas.

“Sadly, just as night follows day, increases in deaths will now follow on in the next few weeks,” Prof Van-Tam said.

He warned that the UK was in a different position than during the first wave because “we are now are going into the colder, darker winter months”.

“We are in the middle of a severe pandemic and the seasons are against us. Basically, we are running into a headwind,” he said.

But he also said the UK has “much improved testing capabilities” and “better treatments” available, meaning that “we know where it is and how to tackle it”.

He stressed the importance of following public health guidance and minimising contact with others, adding: “I know this is very hard, but it is an unfortunate scientific fact that the virus thrives on humans making social contact with one another.”

Find out how the pandemic has affected your area and how it compares with the national average.

It comes as the Labour Party and business groups voiced concern at the “ripple effect” of Covid shutdowns that are expected to be announced on Monday.

Labour claims that close to one million workers will be at risk because the chancellor’s plan to pay staff at UK companies that are told to close 67% of their wages does not extend to those who may be indirectly affected, such as those in supply chains.

The Treasury denied firms that are not fully closed would not receive help.

A spokesperson said: “We do not recognise these figures,” adding that Labour had “incorrectly” listed some sectors as not benefitting from the scheme.

Prime Minister Boris Johnson will set out the new rules for hotspots in the House of Commons on Monday.

Every region of England is expected to be placed in one of three tiers, with the Liverpool City Region thought to be in the category with the strictest rules.

Plans are not yet finalised, BBC political correspondent Chris Mason said, but that is likely to mean pubs will close, restaurants could face restrictions, people may even be told not to travel in and out of the area. Schools and universities would remain open.

More talks are expected on Sunday between the government and leaders in parts of England that are expecting new restrictions.

Council leaders and mayors have expressed their anger at what they see as inadequate help for those who will no longer be able to work.

Many regions are demanding more local control over contact tracing, while others have raised the possibility of legal action if they do not get the support they demand.

The government says it is committed to involving local leaders in decision-making.

Discussions with Downing Street on Friday were described on Merseyside as “frosty,” but “cordial and giving on both sides”.

Leaders in Greater Manchester do not yet have another meeting with the government arranged, Chris Mason added – but one is expected before the prime minister’s statement on Monday.

In Nottingham, Newcastle, Sunderland, Leeds and elsewhere, leaders and residents await the announcement of the template for the next phase of the pandemic.

How has coronavirus affected you? What have restrictions meant for you?? Share your experiences by emailing haveyoursay@bbc.co.uk.