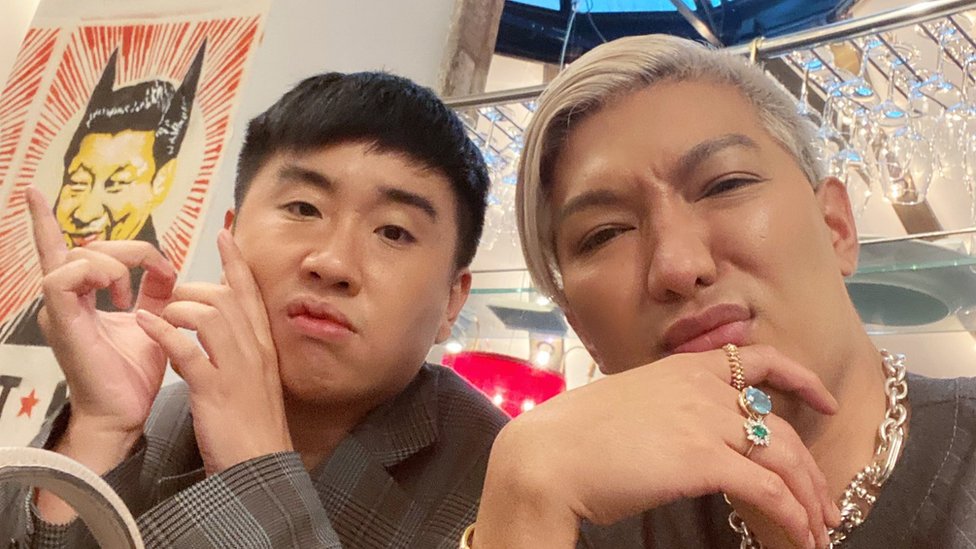 Publishedduration34 minutes agoimage copyright@Bryanboyimage captionBryanboy (right) said he found being in the restaurant with the posters (left) awkwardAs coronavirus has spread around the world, people of Asian heritage have reported facing greater hostility.But fashion influencer Bryanboy said he was shocked to find “racist” images on the walls of a Stockholm restaurant.”It wasn’t until we placed…

As coronavirus has spread around the world, people of Asian heritage have reported facing greater hostility.

But fashion influencer Bryanboy said he was shocked to find “racist” images on the walls of a Stockholm restaurant.

“It wasn’t until we placed our order that we noticed all the huge posters on the wall — an illustrated portrait of a very yellow Xi Jinping with bat ears and the term ‘BAT MAN'”, he said.

The artist says the image was satirical and that no offence was intended.

Iron Work Arts, who created the work, issued an apology and said they were removing the image from their accounts.

Bryanboy, whose real name is Bryan Yambao, was dining at a restaurant in the Swedish capital with a friend from Hong Kong on Saturday. He wrote on Instagram that he was “mortified” when he saw the posters.

“Ever since Covid happened, me and pretty much a lot of the Asian people I know have gone through so much racist and xenophobic abuse on the internet,” Mr Yambao, who is Filipino, told the BBC. “So to see it in real life was kind of surreal.”

He added that he had already ordered food but “couldn’t wait to get out of the restaurant”.

The artwork features the Chinese president as “Bat Man” – in an apparent reference to the theory that the coronavirus may have originated in bats – in front of a Japanese-style rising sun. It was installed in the restaurant several weeks ago.

The first cases of coronavirus were recorded in the Chinese city of Wuhan late last year, but the virus has since spread around the world.

The pandemic has led to a wave of racism, xenophobia and even violence directed towards people of Chinese ethnicity, as well as people of East Asian appearance. In one case in London, a student from Singapore was beaten by a group of men who allegedly said: “I don’t want your coronavirus in my country.”

“Almost every day I get comments, just because I’m Asian, linking me with Covid,” said Mr Yambao. “And it’s not just online – these images have real-life repercussions, because they create a hostile environment for Asians and it normalises racism and xenophobia against them.”

The artist behind the posters, Iron Art Works, said they had not intended for them to be racist, adding that their previous artwork included satirical depictions of a number of world leaders.

“My intention was only to make a fool of Xi [Jinping]/CCP [Chinese Communist Party] NOT to make a racist comment that hurt a lot of people, but I accidentally did, and I again apologise to you who feel that way,” they wrote in an Instagram post.

Tonight my “BAT MAN” blew up for beeing racist against Asian people. My intention was never for it to be. Thou racism and hate IS a part of our time and that is included in the symbolism. I cant stretch enough how much i apologise for the people who got their feelings hurt by it. I have been working with hardcore satire portraits alot and making a fool of people in power (swipe ex HATE and PUTAN). My intention of the “BAT MAN” was the same, represented by the dictator Xi Jinping and CCP’s handling of the virus outbreak. But i now, thanks to you teatching me, realised that it hit all wrong… So I repeat, my intention was only to make a fool of Xi/CCP, NOT to make a racist comment that hurt a lot of people, but i accedentally did, and I again apologise to you who feel that way. So for that sake i will take down the posts of it, but im keeping this one, to contribute too the open discussion and so you get your voices herd. That was my intention all along.

But Mr Yambao said the artist’s response was a “non-apology”.

“It comes from a place of ignorance – that he wasn’t expecting it to be racist or considered racist… I’m all for freedom of expression by artists, but I just wish that he knew what the repercussions of his work are.”

“In these crazy times, when millions of people are affected by this disease and hundreds of thousands of people have already died, and the world is already in such a bad state, do we really need to create divisive artwork out there, that could be misconstrued by anyone?” Mr Yambao asked.

The World Health Organization has warned against attaching locations or ethnicities to the pandemic. “This is not a ‘Wuhan Virus’, ‘Chinese Virus’ or ‘Asian Virus’,” the body said in guidance issued earlier this year, adding that the “official name for the disease was deliberately chosen to avoid stigmatisation”.