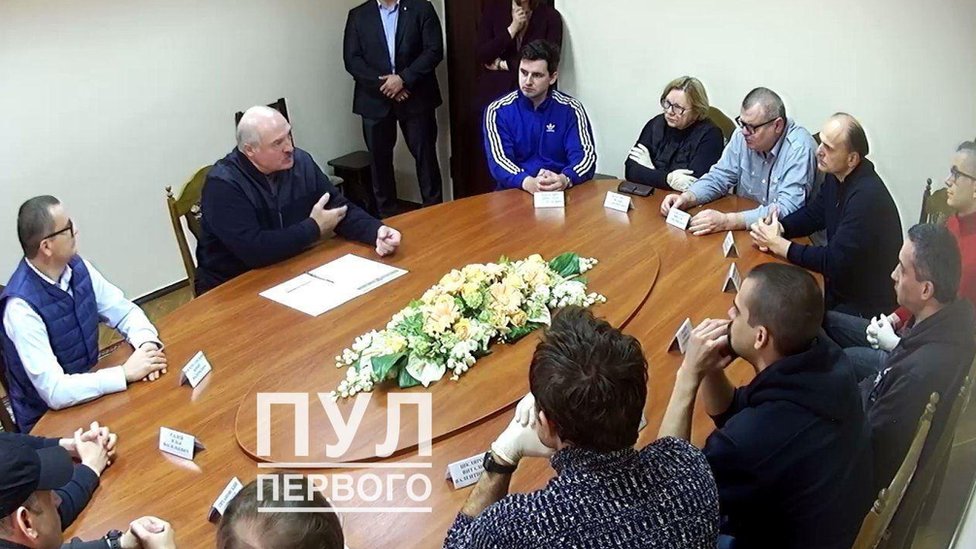 Publishedduration6 hours agoimage copyrightPress Office of the President of Belarusimage captionA photo of the meeting was shared by Mr Lukashenko’s officeBelarusian President Alexander Lukashenko has held an unexpected meeting with political opponents in the jail where they are currently detained.State media reported that the president called the meeting to discuss constitutional reform with the opponents…

Belarusian President Alexander Lukashenko has held an unexpected meeting with political opponents in the jail where they are currently detained.

State media reported that the president called the meeting to discuss constitutional reform with the opponents he had jailed.

Opposition figures said the meeting was a sign of weakness on his part.

A violent crackdown on unrest in the days following the disputed poll saw thousands of people detained, and hundreds beaten by police.

The EU and the US have refused to recognise Mr Lukashenko’s new term.

However, a photo posted by the press service shows Mr Lukashenko sitting at a table with 11 political figures, all of whom look pale and unsmiling.

Among them is Viktor Babaryko, a banker who was initially seen as Mr Lukashenko’s strongest rival in the election, but was barred from running and jailed in July.

Liliya Vlasova, a lawyer and member of the opposition’s Coordination Council, is also in the photo, as is Vitali Shkliarov, a Belarusian-American strategist who worked on US Senator Bernie Sanders’ presidential campaign.

A short video clip shared by the press service also shows Mr Lukashenko saying to the group: “I am trying to convince not only your supporters but the whole of society that we need to look at thinks more broadly.”

Apparently referring to the ongoing protests, he added: “You can’t rewrite the constitution on the streets.”

At the end of the clip the opponents are seen laughing at something, but the sound is muted.

The president’s main rival Svetlana Tikhanovskaya – who is currently in exile in Lithuania – later wrote on social media that Mr Lukashenko had “acknowledged the existence of political prisoners whom he used to call criminals”.

But she then added: “You can’t have dialogue in a prison cell.”

Pavel Latushko, a former ambassador to France who joined the Coordination Council and was pressured to leave the country, also posted about the meeting on social media.

He said that by entering a dialogue with those he had put behind bars, Mr Lukashenko had shown weakness.

What is happening in Belarus?

Weeks of anti-government demonstrations since the disputed election have seen tens of thousands of protesters on the streets in cities across the country.

Many opposition activists have been beaten up by police and thousands have been arrested during months of unrest. They are demanding the release of all political prisoners and a free and fair re-run of the election.

Many of Ms Tikhanovskaya’s supporters and allies have been detained, on the charge of making public calls to harm the country’s security, or forced to leave the country after receiving threats from the authorities.

Meanwhile eight EU nations, including the UK and Germany, are recalling their ambassadors to Belarus in solidarity with Lithuania and Poland.

Belarus says Lithuania and Poland are interfering in its internal affairs by hosting Ms Tikhanovskaya and other opposition figures and refusing to accept the election result.

Belarus recalled its ambassadors to Poland and Lithuania last Friday and told both countries to reduce the number of staff at their embassies in Minsk. They refused and recalled their own ambassadors.