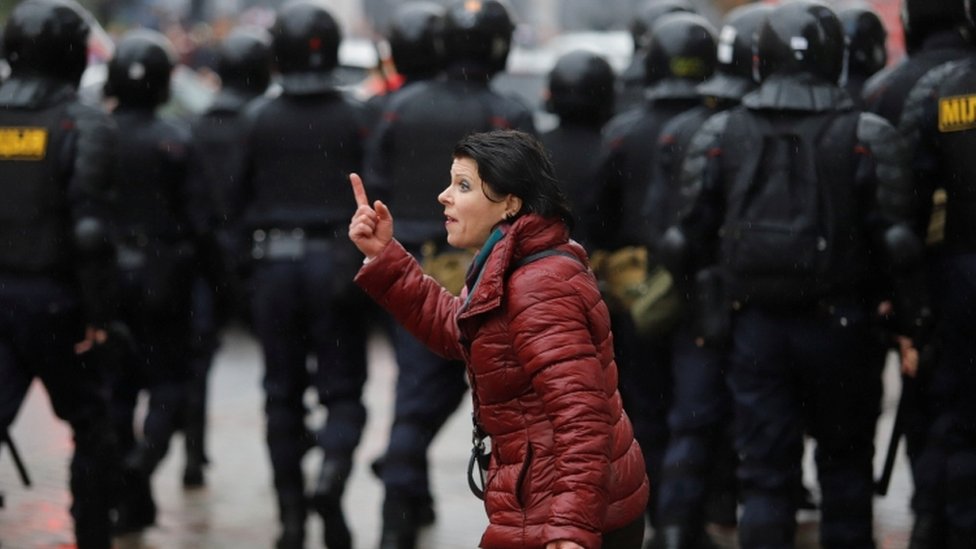 Publishedduration55 minutes agoimage copyrightReutersimage captionProtests have convulsed Belarus every weekend since the disputed presidential election in AugustBelarusian riot police have detained dozens of protesters after clashes at the latest mass march against President Alexander Lukashenko.Protests have swept the eastern European country since Mr Lukashenko claimed victory in an August election widely viewed as rigged.Thousands thronged…

Belarusian riot police have detained dozens of protesters after clashes at the latest mass march against President Alexander Lukashenko.

Protests have swept the eastern European country since Mr Lukashenko claimed victory in an August election widely viewed as rigged.

Thousands thronged the streets of capital Minsk for another Sunday rally.

Many opposition activists have been beaten up by police and thousands have been arrested during months of unrest. They are demanding the release of all political prisoners and a free and fair re-run of the election.

The EU and the US have refused to recognise Mr Lukashenko’s new term. Mr Lukashenko denies fixing the poll and has received support from Russia, his country’s closest ally.

Svetlana Tikhanovskaya emerged as the main opposition leader after standing against Mr Lukashenko in August’s election, arguing she would have won had it not been rigged.

Ms Tikhanovskaya was forced to go into exile in Lithuania after receiving threats following the disputed vote. She has repeatedly appealed to the international community to put pressure on Mr Lukashenko so that a democratic transition can be launched by negotiation.

Opposition hopes of a peaceful resolution were raised on Saturday after Mr Lukashenko held an unexpected meeting with political opponents in the jail where they are currently detained.

State media reported that the president called the meeting to discuss constitutional reform with his imprisoned opponents.

What happened at Sunday’s protests?

Footage shows the security forces, dressed in black and armed with batons, rounding up peaceful protestors congregating in Minsk city centre and taking them to waiting vehicles.

The Viasna rights group, which monitors detentions at political protests, said at least 39 people had been detained in Minsk as well as about a dozen in other cities.

Journalists covering the demonstrations were among those detained, including those from Russia’s Tass agency and the state Belarusian news agency BELTA.