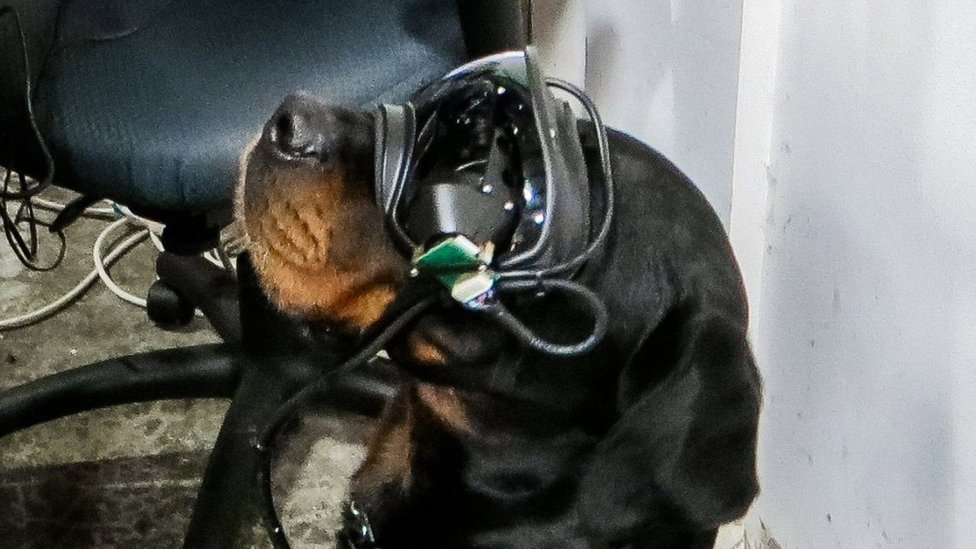 Publishedduration14 hours agoimage copyrightCommand Sight / US Armyimage captionThe goggles are both a camera and a displayThe US Army has shown off augmented reality goggles for combat dogs, designed to let them receive orders at a distance.The technology, made by a firm called Command Sight, is managed by the US Army Research Laboratory.Military dogs can…

The US Army has shown off augmented reality goggles for combat dogs, designed to let them receive orders at a distance.

The technology, made by a firm called Command Sight, is managed by the US Army Research Laboratory.

Military dogs can scout ahead for explosives and other hazards, but need instructions.

The goggles are designed to let their handlers direct them, safely out of harm’s way.

In current combat deployments, soldiers usually direct their animals with hand signals or laser pointers – both of which require the handler to be close by.

But that need not be the case if the prototype AR goggles are widely adopted, the army said.

Inside the goggles, the dogs can see a visual indicator that they can be trained to follow, directing them to a specific spot.

The handler, meanwhile, can see what the dog sees through a remote video feed.

“AR will be used to provide dogs with commands and cues; it’s not for the dog to interact with it like a human does,” said Dr Stephen Lee, a senior scientist with the Army Research Laboratory (ARL).

He explained that augmented reality works differently for dogs than for humans, adding: “The military working dog community is very excited about the potential of this technology.”

Each set of goggles is specially fit for each dog, with a visual indictor that allows the dog to be directed to a specific spot and react to the visual cue in the goggles.

The goggles themselves are not new – military dogs are already used to wearing them as protection in bad conditions or for aerial drops, but the augmented reality system is a new development.

Command Sight’s founder Dr AJ Peper said the project was still in its “beginning research stages”, but that early results were “extremely promising”.

A lot of the research had been done with his own dog – a Rottweiler named Mater.

Justin Bronk, research fellow at the Royal United Services Institute (Rusi) defence think tank, told the BBC that although the idea might sound like an “extravagant expense”, it could still be useful.

“An ability to direct dogs with visual cues through augmented reality goggles without having to maintain close physical proximity has obvious tactical benefits in a variety of situations,” he said.

Command Sight has been given more funding to make a wireless version of the product, which should be far more practical than the initial, leashed version.