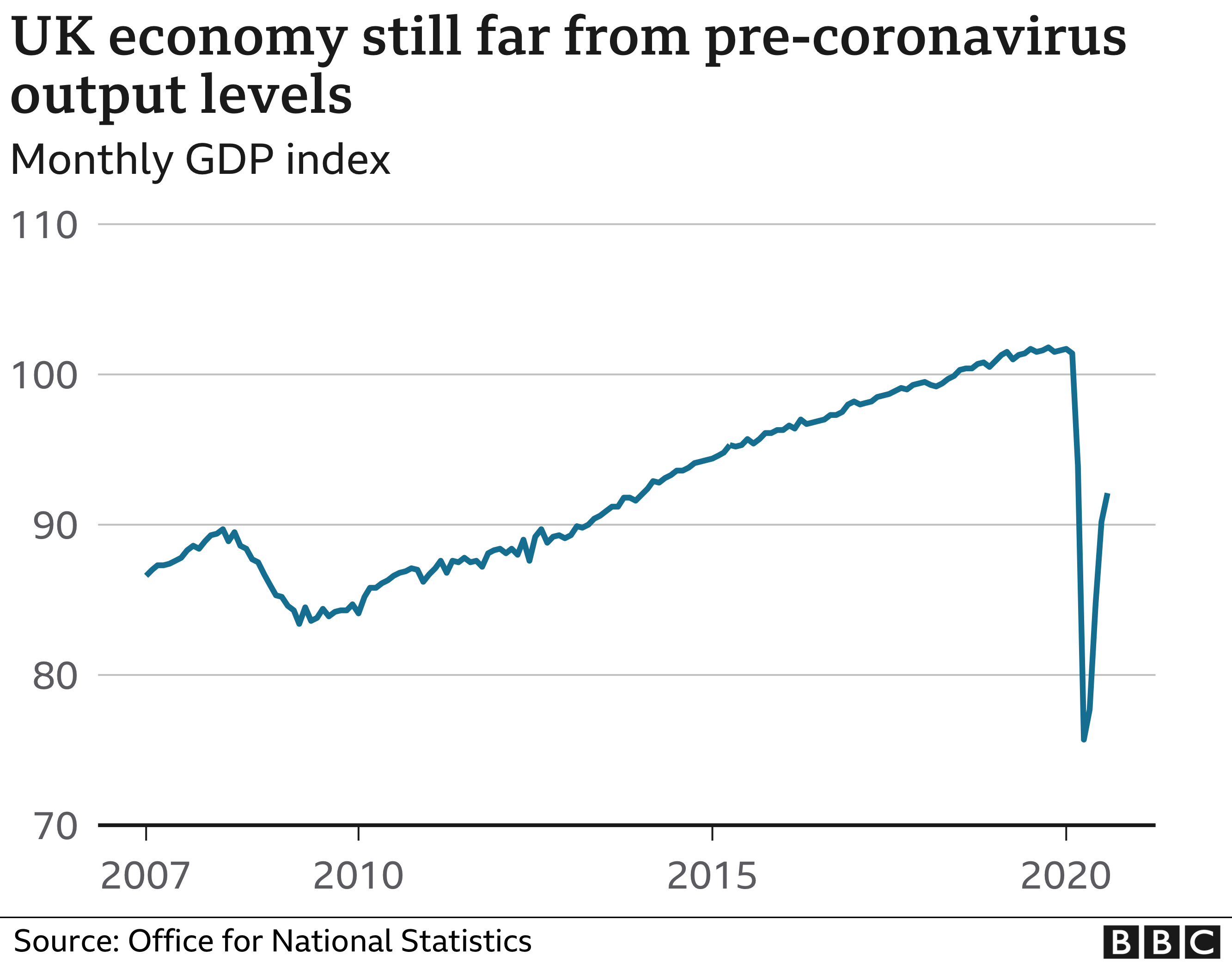 Publishedduration2 minutes agoThe UK economy continued its recovery in August, growing by 2.1%, as the Eat Out to Help Out scheme boosted restaurants.But the figure was below expectations and the economy is still 9.2% smaller than before the pandemic struck.It marked the fourth consecutive month of expansion following the slump induced by the coronavirus lockdown.However,…

The UK economy continued its recovery in August, growing by 2.1%, as the Eat Out to Help Out scheme boosted restaurants.

But the figure was below expectations and the economy is still 9.2% smaller than before the pandemic struck.

It marked the fourth consecutive month of expansion following the slump induced by the coronavirus lockdown.

However, growth in August was slower than the expansion seen in both June and July.

In June, the economy grew by 8.7% and in July, by 6.6%. Analysts said the coming months were likely to see growth slackening further because of new Covid restrictions, the end of the furlough scheme in October and concern over a no-deal Brexit.

The Office for National Statistics (ONS) said important sectors of the economy, such as services and construction, were still considerably smaller than in February.

The ONS also issued figures for the three months to August, showing growth of 8% over the period as lockdown measures eased further.

Eat Out to Help Out, which ran from Monday to Wednesday during August, offered 50% off food up to the value of £10.

Discounts for more than 100 million meals were claimed through the scheme.

“The economy continued to recover in August but by less than in recent months,” said Jonathan Athow, the ONS deputy national statistician for economic statistics.

“There was strong growth in restaurants and accommodation due to the easing of lockdown rules, the Eat Out to Help Out scheme and people choosing summer ‘staycations’. However, many other parts of the service sector recorded muted growth.

“Construction also continued its recovery, with a significant boost from housebuilding.”

He added that there was “limited growth” in manufacturing, with car and aircraft production still much lower than the start of the year.

“So much for the V-shaped recovery.” said Jeremy Thomson-Cook, chief economist at Equals Money, referring to optimistic forecasts of a swift rebound in growth.

“Services, manufacturing and construction all declined in August from the previous month’s measure, a sure-fire sign that the initial figures which suggested a double-digit growth recovery were actually more a function of just how much growth had fallen during the wider lockdown.

“Right now, the UK economy has little to no momentum,” he said, adding that the road to recovery was going to be “a long and slow one”.