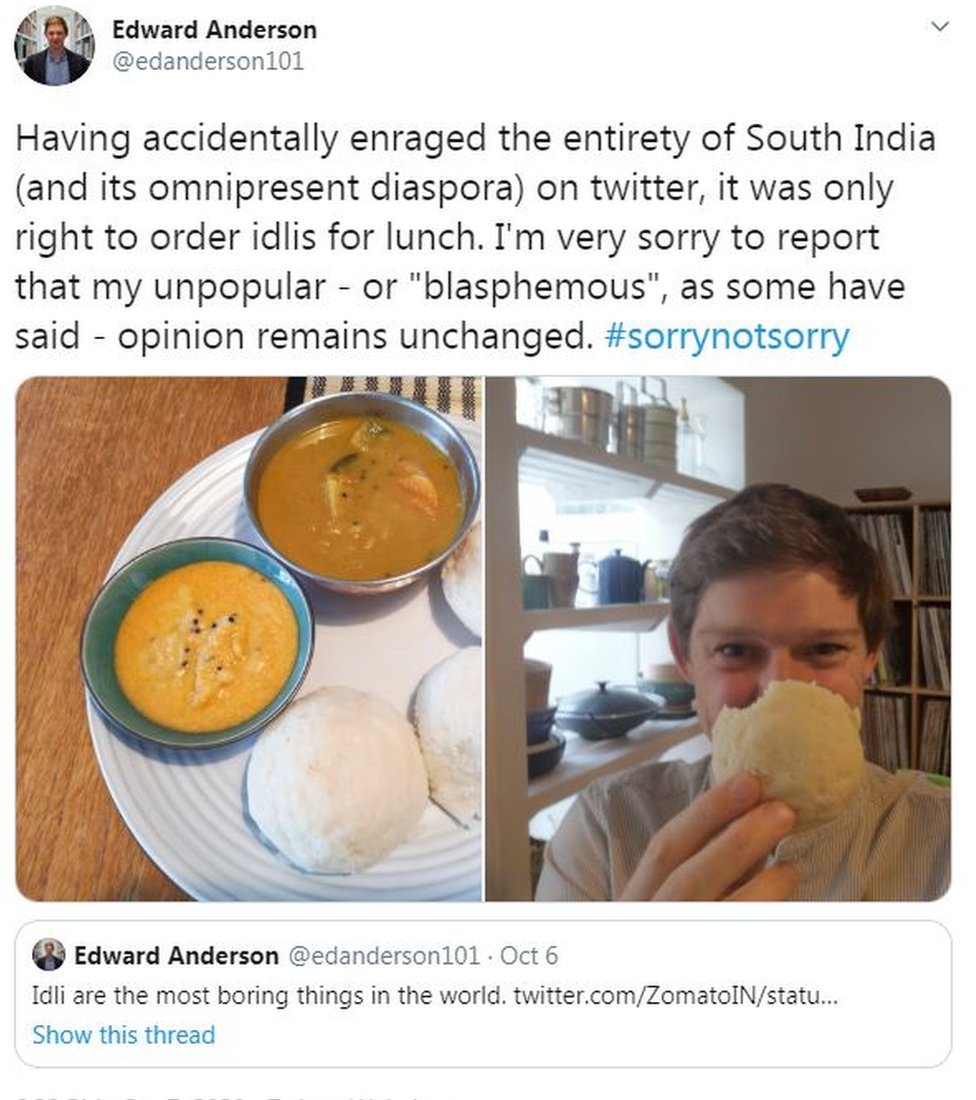 A tweet from a UK-based academic calling an Indian comfort food “boring” has sparked an amusing food war on Twitter.

“Idli are the most boring things in the world,” historian Edward Anderson tweeted.

The idli is a steamed rice cake that is usually eaten with a lentil-based vegetable stew called sambar. It is regarded as a gut friendly staple breakfast and comfort food, popular with South Indians, living in India and abroad. Food writer Vir Sanghvi calls it the best known South Indian dish in India and perhaps, the world.

Democratic vice-presidential nominee Senator Kamala Harris – who has an Indian-born mother and Jamaican-born father – has fondly recalled that her mother was keen to instil in her a “love for good idli” during her holidays in the south Indian city of Chennai (formerly Madras).

Senator Harris, who is reaching out to Indian-American voters, is not the only politician who’s wooing voters with idli talk.

In the city of Salem in the southern state of Tamil Nadu, politicians of India’s ruling BJP are serving cheap “‘Modi idlis” – named after Indian Prime Minister Narendra Modi- to the poor during the pandemic. This move is seen as an open challenge to the state’s local ruling AIADMK party which offers “amma idlis” – named after the late chief minister, J Jayalalithaa, who was fondly called amma or mother.

Dr Anderson – who teaches at Northumbria University in Newcastle – posted his opinion in response to a question from an Indian food delivery service asking people what is the one dish “you can never understand why people like so much”.

Dr Anderson found out that his tweet was highly triggering for idli lovers, especially south Indians who exploded on Twitter.

Ishaan Tharoor, a writer and columnist, was the most critical.

His father, Shashi Tharoor, who is a senior Indian MP and well-known writer, swiftly joined in, and even suggested a better way to have idli.

Others despaired that a frontal attack on their favourite comfort food had left them devastated.

Dr Anderson didn’t back down from a joust. He said he had ordered a plate of idli for lunch and after eating it, had not changed his opinion.

Dr Anderson told the BBC that he’s had “many idlis in his life mainly in India – I’ve spent a lot of time there over the years and my wife is from Kerala. Idlis regularly feature at breakfast with the in-laws”.

Enraged idli lovers on Twitter tried to school Dr Anderson on the right way to breakfast on idlis, with an array of delicious sides. They suggested warm idli mopped up from a banana leaf with fiery mulagapodi, a spicy dry condiment of lentils and chillies, fresh coconut chutney and steaming sambar.

Not for Dr Anderson: “I agree that these accompaniments are great… it’s just idlis aren’t the best vehicle for them! Dosa and vada and appam are far superior!”

Dosa, vada and appam are popular fermented and steamed south Indian breakfast dishes that are also served with sides of sambar, mulagapodi and a variety of chutneys.

Dr Anderson said the debate on idli proves how “food speaks to people’s identity, their regional pride and also resonates with everyone on an emotional level”.

“So many of the replies, whether agreeing or disagreeing with me, mention growing up eating idlis in their family homes and local eateries. A lot of people who have responded are also expatriate Indians or members of the diaspora – for many of them, food is an unbreakable connection to home,” he said.

Dr Anderson said as far as the “fun responses go, some have been brilliant”.

“A few people have taken things a bit too seriously, but 99% of people’s responses have been in great humour.”

“And a lot of people have made the very valid point that it is a bit rich for a Britisher to criticise Indian food as being bland!”