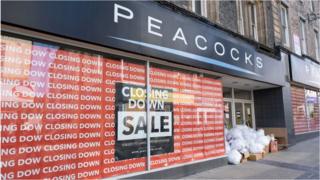 Image copyright Getty Images Edinburgh Woollen Mill, owner of the Peacocks and Jaeger clothing brands, says it plans to appoint administrators in an attempt to save the business.The move puts 21,000 jobs at risk amid what the company described as “brutal” trading conditions.”Like every retailer, we have found the past seven months extremely difficult,” said…

Edinburgh Woollen Mill, owner of the Peacocks and Jaeger clothing brands, says it plans to appoint administrators in an attempt to save the business.

The move puts 21,000 jobs at risk amid what the company described as “brutal” trading conditions.

“Like every retailer, we have found the past seven months extremely difficult,” said Edinburgh Woollen Mill chief executive Steve Simpson.

The stores will continue to trade as a review of the firm is carried out.

The company says it has had “a number of expressions of interest for various parts of the group” which it will consider.

Edinburgh Woollen Mill (EWM), which is owned by billionaire businessman Philip Day, has 1,100 stores for its brands.

The businesses attract older shoppers who are likely to be keeping away from the High Street to protect against coronavirus, says Catherine Shuttleworth, an independent retail expert.

She said it was a “devastating blow” to small towns and tourist areas where they are based and that buyers for the businesses as a whole could be hard to come by.

“You might get piecemeal buyers, but I don’t hold out much hope,” she said.

Mr Day has a £1.14bn fortune, according to the Sunday Times Rich List.

He bought Bonmarché out of administration in February. The deal ruffled some feathers, since Mr Day was its previous owner and landlords and suppliers were expected to forgive some of its debts.

Bonmarché is not part of the plans announced on Friday. Edinburgh Woollen Mill, including Bonmarché, employs 24,000 people.

EWM said it had filed a notice to appoint administrators, partly because of “the harsh trading conditions caused by the impact of the Covid-19 pandemic and a recent reduction in its credit insurance”.

Mr Simpson said: “Through this process, I hope and believe we will be able to secure the best future for our businesses, but there will inevitably be significant cuts and closures as we work our way through this.”

He also blamed part of the company’s troubles on “a series of false rumours about our payments and trading which have impacted our credit insurance”.

EWM has been accused by suppliers in Bangladesh of not paying for goods. The company denies this.

EWM has appointed FRP to review the business. The firm was also hired for the Bonmarché administration.

The pandemic has accelerated a shift in the retail industry from physical stores to online shopping people have been stuck at home and stores have been temporarily closed.

Last month, the boss of one of the UK’s most successful and resilient High Street chains told the BBC that hundreds of thousands of traditional retail jobs may not survive in the wake of the coronavirus crisis.

Lord Wolfson, who runs clothing firm Next, said there was a clear threat to thousands of jobs, which are now “unviable” because the lockdown has triggered a permanent shift to online shopping.

Are you an Edinburgh Woollen Mills employee? Have you been affected by the issues raised here? Share your experiences by emailing haveyoursay@bbc.co.uk.