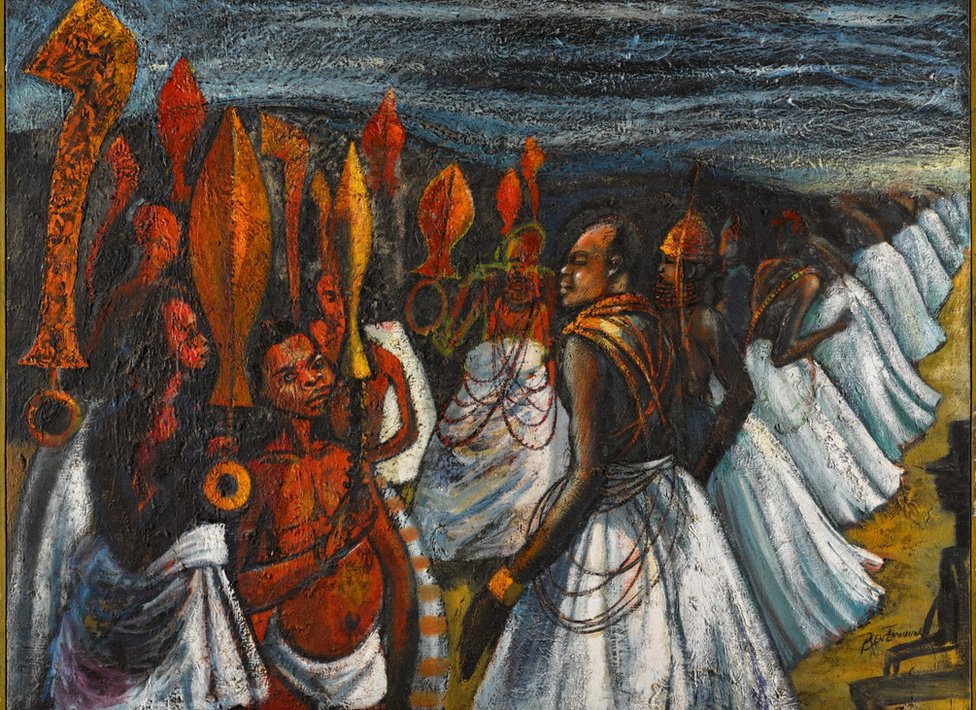 Publishedduration4 hours agoA previously unknown work by Ben Enwonwu, Nigeria’s most celebrated 20th Century visual artist, is up for auction in an online sale organised by Sotheby’s.The Court of the Oba of Benin, thought to have been painted in the 1940s, is described as a “masterpiece” by the auctioneers, but was never documented and was…

A previously unknown work by Ben Enwonwu, Nigeria’s most celebrated 20th Century visual artist, is up for auction in an online sale organised by Sotheby’s.

The Court of the Oba of Benin, thought to have been painted in the 1940s, is described as a “masterpiece” by the auctioneers, but was never documented and was held in a private collection.

It was created in the wake of Enwonwu’s apprenticeship with the bronze casters in the Nigerian city of Benin – the home of the famous Benin Bronzes.

The painting, which is one of his earlier works, shows a festival at the Oba’s palace and reflects the artist’s celebration of the culture of the area.

“Throughout his career, Enwonwu felt very strongly that a modern Nigeria should be rooted in its own heritage and history,” Hannah O’Leary, Sotheby’s African art specialist, told the BBC.

The Court of the Oba of Benin is one of 12 of his works on sale from the auction house’s London base and they all reflect this thinking.

In the head and hair style, the sculpture Anyanwu, references are made to the Benin Bronzes.

Born in Onitsha in 1917 to a father who was a traditional wood carver and a successful merchant mother, Enwonwu saw himself as a sculptor first and a painter second, Ms O’Leary says.

Anyanwu, made in 1956, is a depiction of the Igbo earth goddess Ani and is a miniature version of a piece that was displayed at the National Museum in Lagos.

It was created just a few years before independence in 1960 and Enwonwu said at the time that his “aim was to symbolise our rising nation”.

From the 1950s, the artist began a series on Igbo masquerades called Agbogho Mmuo – the name of an annual festival, which translates as Maiden Spirits.

The works in the series on sale at Sotheby’s are from the 1970s, but depictions of these traditional ceremonies played a large part in his work up to his death in 1994.

Enwonwu developed his ideas on movement in his Africa Dances series.

In these examples, he left the rural, more traditional setting and showed people enjoying themselves in an urban night club.

His sculptures in the same series from the 1980s do not have a specific context and are “far more pure and more about movement and the elegance of the body”, Ms O’Leary says.

Regina was painted in 1953, when Enwonwu was back in Nigeria after training in London.

He was part of an intellectual movement that was trying to create a unified Nigerian culture before independence.

This portrait of his 19-year-old niece was aimed at capturing the mood of an optimistic and self-assured youth, the Sotheby’s catalogue says.

Interest in buying Enwonwu’s work has increased in the last two years following the sale of two of his portraits, Tutu and Christine, for more than $1m (£770,000) each.

Tutu, a portrait of a princess, is his most famous work and reproductions could be seen in homes across Nigeria. There were three original versions, all of which had been lost until 2018, when a London family said one of them had been hanging in their house for years.

Enwonwu always had huge success at home and internationally during his lifetime and “for an artist of his calibre [the demand for his work] shouldn’t be surprising”, Ms O’Leary said.

All images are subject to copyright.