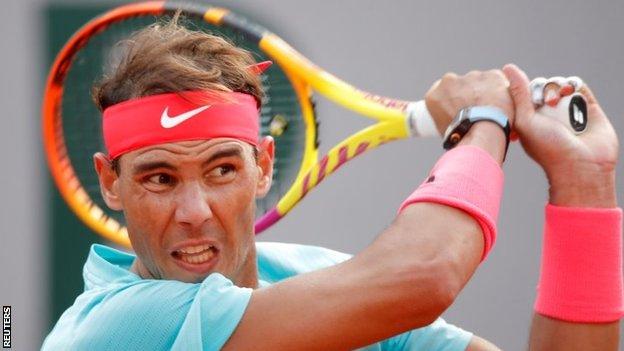 Nadal is through to the French Open final without dropping a set for the sixth time in his careerRafael Nadal maintained his grip on the French Open by reaching another men’s singles final with a battling win over Argentina’s Diego Schwartzman.The Spanish second seed is going for a record-extending 13th title and won 6-3 6-3…

Rafael Nadal maintained his grip on the French Open by reaching another men’s singles final with a battling win over Argentina’s Diego Schwartzman.

Nadal, 34, has only lost twice on the Roland Garros clay in his career and won all 13 of his semi-finals there.

“It is always very difficult against Diego until the end,” said Nadal.

“I am happy with the way I played, I think I have been improving and it was a very positive match for me.”

Nadal provides a sense of familiarity at an unfamiliar French Open

Everything is unfamiliar about this French Open: the tournament taking place in cooler weather after being moved because of the coronavirus pandemic, a new roof over a Court Philippe Chatrier, floodlit matches going long into the night and a sparse crowd of up to 1,000 fans.

Nadal working his way through the draw into the final without too many bumps is one of the few constants.

Heading into the tournament, Nadal said a lack of usual preparation for his favourite Grand Slam, the autumnal conditions in Paris and a heavier new ball provided him with the “toughest test” which he had ever faced at Roland Garros.

Aside from a tricky start against Italian teenager Jannik Sinner in the quarter-finals, it has actually been smooth progress for the Spaniard, who has yet to drop a set over the fortnight in Paris.

Schwartzman was the first seed which Nadal had faced in the tournament and, despite dropping serve in a tentative start and then twice more in a nervy finish, never looked in danger of losing in the Roland Garros last four for the first time.

In-between those moments where he was troubled, Nadal started to find greater rhythm and depth with his groundstrokes, with his feared forehand looking particularly potent.

That shot came to his rescue when he needed it most in a scrap of a third set, landing three winners from that side to fight back from 40-15 down, overcoming four deuces, and hold for a 6-5 lead.

Nadal went from looking slightly hesitant to supremely confident as a result, deflating Schwartzman as the tie-break – and the match – quickly slipped out of his grasp.

There will be concerns for the Spaniard, however. Loose volleys and a barrage of unforced errors – during a spell in the third set where the players exchanged four successive breaks – showed some vulnerability.

A truer test of the 19-time major champion’s real level will come on Sunday – particularly if it is Djokovic standing on the opposite side of the net.